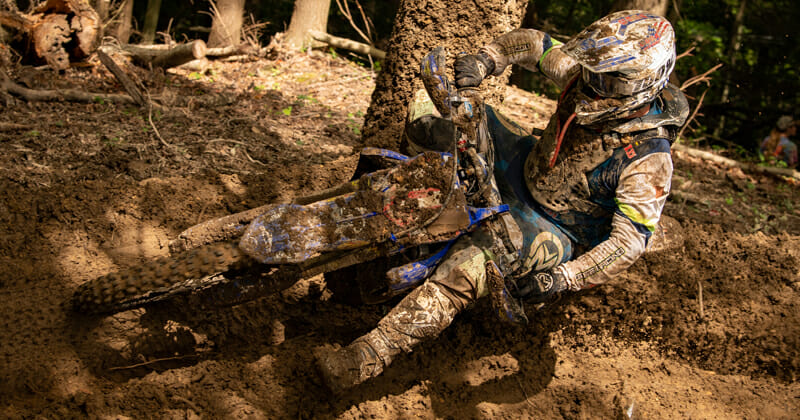 Steward Baylor begins the final part of the GNCC season with the win over Mountaineer.

The Grand National-Cross Country Series returned from its annual summer break for this weekend’s Mountaineer GNCC at Summit Bechtel Reserve in Beckley, West Virginia, where Steward Baylor took a victory from behind in his second race after a neck injury he sustained during the first race of the season. The AmPro Yamaha rider battled through the field after getting off to a poor start and knocking Coastal Racing GasGas leader Ricky Russell to take the lead at the halfway mark. From there, Baylor pulled away on the slippery, deeply rutted Summit Bechtel Reserve course to overtake series points leader Jordan Ashburn (Magna1 Motorsports/Husqvarna) by 19 seconds at the finish.

“We had a really tough first round,” Baylor said. “We made a tire choice that really worried me after the first two laps. We had a new track there, and it just wasn’t at that hard base yet. I swear, I couldn’t keep it on two wheels, and I crashed four or five times. Eventually the track thinned out and the tire became the right choice. It’s the same tire we’ve won the last three years here. Once we found our rhythm, I got some fresh air and moved on. Then I had a pit board saying minus 20, minus 15, and then I was on Ricky [Russell] in the rock garden. He looked tired. »

Steward’s neck injury early in the season nearly ended his career. “Coming back from what I came back from this year is an achievement in itself,” Baylor said. There was a time when I was about to give it up. I was about to finish. When you lose feeling in your hands and feet, it’s scary.

With Baylor out of the championship chase after missing the first nine rounds, and with former FMF/KTM points leader Ben Kelley announcing on social media that he was done for the remainder of the season with his leg and shoulder injuries, Ashburn, who was fresh off his first-ever XC1 win at the previous round at Snowshoe, did exactly what he needed to do to extend his lead in the title chase to 32 points over Kelley and 56 points over Craig DeLong with his second place finish.

“I got off to a good start and kind of followed Ricky,” Ashburn said. “I was just trying to do solid laps, which was tough on this track. There towards the end, Stew and Thad [Duvall] caught up, and it felt like we had a train at the end of that third lap and into the fourth lap. Then I think it hit us all like a wall. It was really intense. I think I was just 10-20 seconds behind Stew that last lap. I would put on some makeup and I could see him, then he would step back. I was just gassed. I kept thinking, keep it off the ground here.

Returning for his first GNCC since injuring his hip on the first lap, Rockstar Energy Husqvarna’s Duvall took a popular third place in his home country. Like Baylor, Duvall was uncertain about his future after his injury.

“I’m happy to be third,” Duvall said. “Like six months ago, I didn’t even know if I still wanted to race. So getting on the podium is pretty badass. I know now that I still have speed, so I have to put everything in place. I rode great today until the last lap and just made a stupid mistake and let those guys off the hook. Being third after everything I’ve been through feels good.

Coastal Racing GasGas’ Johnny Girroir rode a consistent race to take fourth overall and win the XC2 250 Pro class, with the defending class champion having just about an uneventful day en route to the finish.

Ricky Russell led the race after catching a thunderclap, leading the first three laps. The Coastal Racing GasGas rider had a hard crash midway through lap three that cut him off the wind but still managed to climb back into the lead. His pitstop on lap three, however, was a disaster as the tipper did not fully open and he was forced to pit again on lap four after stroking the bike for the remainder of the lap to avoid to run out of fuel. Russell has consistently managed fourth in the XC1 division and fifth overall.

Craig DeLong raced third on the first lap behind Russell and Ashburn, but a crash with another rider at the top of a hill sent the Rockstar Energy Husqvarna rider back to the pits in search of new gloves and goggles. In the end, he settled for sixth place overall.

Babbitt’s Online/Monster Energy/Team Green Kawasaki’s Grant Davis rode an impressive race to finish 10th overall and first in Division A from the fourth row. Despite nailing a tree near the end of the race, Davis passed several of the late-race XC2 250 Pro riders to claim the ever-wanted top 10.

Rockstar Energy Husqvarna’s Trevor Bollinger, who was in third place overall, missed the race with a hand injury.

AmPro Yamaha’s Rachael Archer passed Rockstar Energy Husqvarna/Surge Off-Road Coaching Team’s Tayla Jones at the seven-mile marker on lap one and never looked back on her way to victory in the WXC class.

Jones, who led the points standings entering the Mountaineer ahead of Steede and Archer, was dropped. With three races remaining, Steede is now atop the standings, two points ahead of Archer.

Click here for all the latest GNCC racing news.