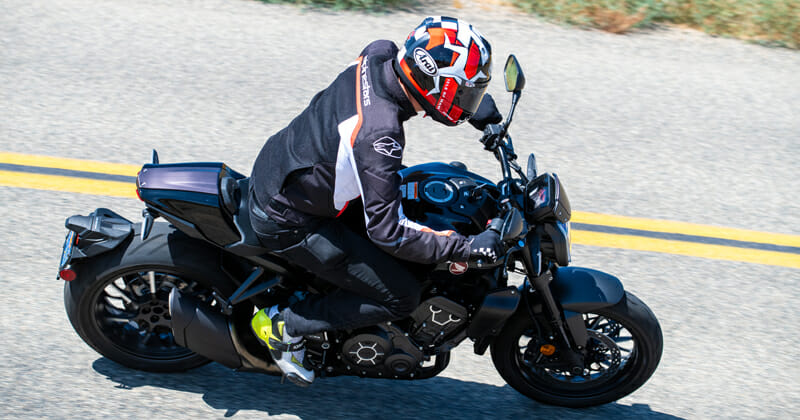 It may not have the reputation of some of its contemporaries, but the Honda CB1000R Black Edition still packs a punch.

It must be very tough to be a naked bike maker over 1000cc in 2022. There are so many competitors that the class has basically been split in two – those mega super naked like the Ducati Streetfighter V4 S, Aprilia Tuono 1100 Factory, BMW S 1000 R and KTM 1290 Super Duke R, and less powerful bikes like the Suzuki Katana, Yamaha MT-10 and this one, the Honda CB1000R Black Edition.

Those with an eagle eye will have noticed that these bikes on the second list are all from the Land of the Rising Sun. It seems that Japan has collectively decided not to participate in this Euro power heist, preferring instead to focus more on machines that appeal to a wider range of riders by keeping the power around 150 horsepower.

This machine was so successful that it took Honda 10 years to update it, with the 2018 machine getting more power, a new chassis, new riding aids and a super funky larger rear wheel design. .

Styling wise, the CB is about as black as you can get from a major manufacturer – hey, it’s in the name. There are sleek machined aluminum parts like the wheel spokes, swingarm plates, engine covers, sides of the engine block itself and the handlebar clamps, but everything else is black, from the outline headlights, small windscreen, fork legs including uprights, rear shock and spring, brake calipers, radiator shrouds, airbox covers (with an anodized finish), the seat unit, the subframe and the exhaust manifold, the manifold box and the silencer.

Oh, and the tires. They are black too.

Far from boring, the all-black aesthetic adds a touch of class to the ride. I never thought I would say that because I feel like all black bikes tend to look a bit lazy and not at all threatening which I’m sure is the angle that designers are looking for. With the selected machined aluminum sections of the CB, this is quite a nice machine to look at, something that only gets better the more you use it.

The CB’s is an interesting riding position. Not your typical naked bike of today that leans the rider a bit into the wind to load the front end up. The CB’s weight distribution is claimed at 48.5/51.5 front to rear and that’s something you notice immediately when you sit down on it. Just like the shape of the tank.

The CB gas tank has very pronounced indentations for your legs and isn’t the most comfortable (at least for me) out there. As such it’s a little harder to get around on the chassis compared to something like a Yamaha MT-10, but the seat itself is well padded and comfortable for at least an hour of riding before need a break.

The engine heritage of the CB1000R dates back to the 2004 CBR1000RR, that first under-saddle exhaust superbike from Honda that was actually their first full-size 1000cc superbike. As such, it has that gnarly rasp when you shove the throttle, but it feels a little anemic compared to even some of its Japanese rivals. Honda Europe claims 143 horsepower and our colleagues at bike world have dyno’d this same bike that we tested at 121 horsepower.

You have four ECU modes on the five-inch TFT display along with the CB—Rain, Standard, Sport, and User—but it’s actually three modes, because User lets you choose the different settings you want from the three other modes and combine them into one. This means the power you want, traction control and engine brake control all have three settings available.

That being the case, the CB still has plenty of grunt for just about any situation. Sport mode (as on many other bikes) can be a bit choppy on the throttle, so I spent most of the time in Standard. If you want to have a little fun you can turn off the traction control (very un-Honda) which will allow you to lift the front wheel whenever you want, but if you try to do it even at a TC level it will will do a little wheelie but then cut forward hard, at which point it takes about two seconds for the ride to be restored.

At this point I started having nightmarish flashbacks to the 2017 Honda CBR1000RR at Portimao in Portugal where, on the most rear-wheel-prone circuit I’ve ever ridden, Honda’s new superbike had its TC control and rear wheel bound (as on this CB), but the lack of dynamism was even more pronounced than here. Thankfully, Honda seems to have worked on the algorithm and improved its combo system, but it’s still not great.

Remember what I said about the weight distribution being leaned more back than forward? You’ll feel it once you really start pushing through the corners. The CB doesn’t turn with quite the speed of the Euro contingent in this class – it’s not lazy in its steering, just more fluid than snappy. This isn’t entirely a bad thing as it promotes a less rushed riding style. Rather than burying the chassis under the brakes, you plan your turns more on the CB and let the chassis flow from corner to corner, as God intended.

The suspension is on par with the quality of the rest of the bike. Showa’s Big Piston Single Function Fork (SFF-BP) is a great mid-range fork that soaks up the majority of what’s thrown at it, but still feels a little plush for my 190+ pound weight. This is a fully adjustable fork, so you can dial in whatever setting you want (within reason) and it’s all done the old fashioned way with no electronics.

The Showa shock gets rebound and preload adjustment, not compression, so even if the specs don’t match front-to-back, the ride quality is still nothing to complain about.

The fact that it has a quick shifter with three different sensitivity levels, an under-seat USB port and turn-by-turn navigation on the dash that can be connected via Bluetooth to your helmet doesn’t help. is also not the case. About the only thing I would have liked were heated grips and cruise control.

The Honda CB1000R Black Edition doesn’t falsely claim to be the be all and end all of 1000cc naked bikes. Honda isn’t stupid enough to say anything like that. What the CB is good for is powerful naked biking but on the calmer side. Forget your 180 horsepower naked bikes, the CB’s performance combination of an engine that can trace its heritage back nearly 20 years, a comfortable and nimble chassis with good suspension and brakes that admittedly could be better, and good panel electronics make a good argument for the price.

That, and it looks boring all in black. Something I never thought I’d say. NC 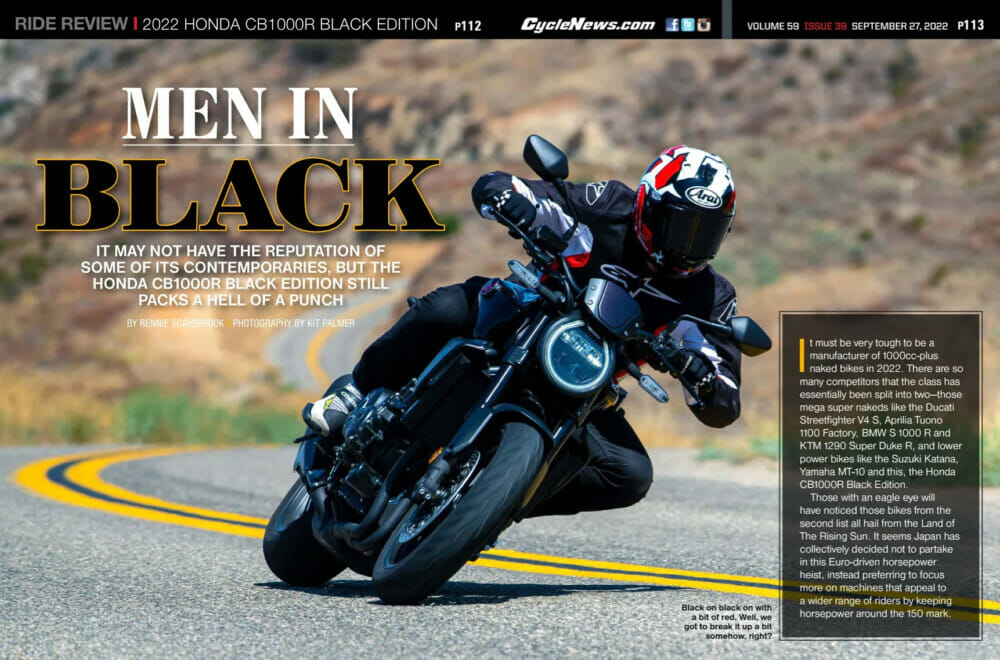 Click here for the latest Cycle news Reviews and news about Sportbike motorcycles.