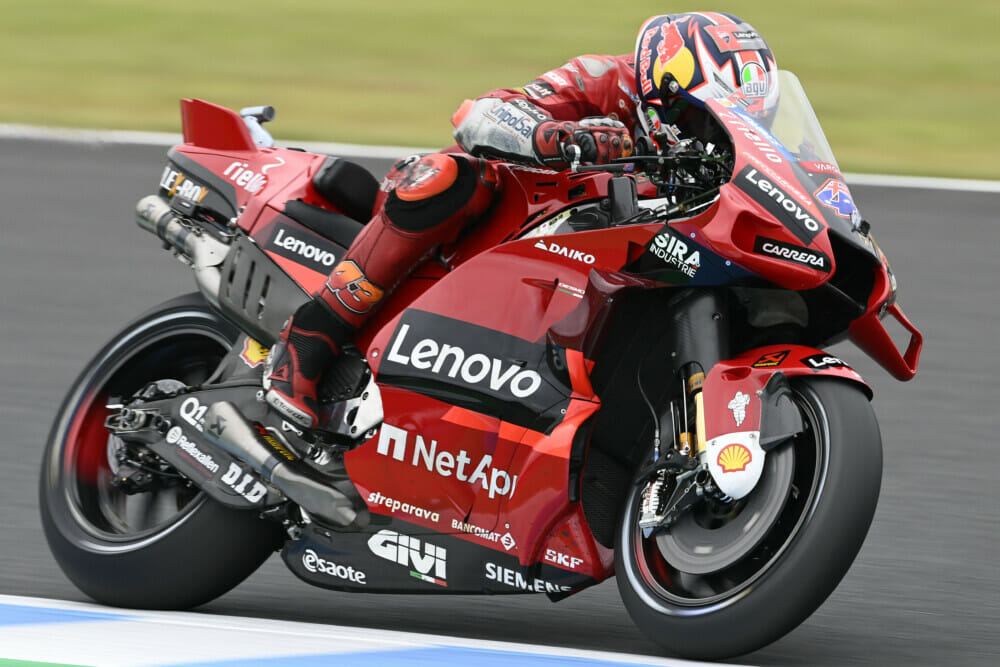 No Ducati team orders – yet

Expressions on Ducati bosses shortly after Enea Bastianini won Aragon MotoGP thanks to a last-lap pass over main challenger Pecco Bagnaia, expressed disappointment at who had won.

Further video evidence showed Ducati Team Manager Davide Tardozzi walking up to the Gresini garage later, giving the race winner a simple hug – nothing more – before saying: “You will get slapped on the knuckles. later,” half-jokingly.

Obviously, they thought “The Beast” should have avoided such a risk. And the two Italians were rightly asked if factory orders would come into play this weekend. Surprisingly, the two said they didn’t.

“Also at Misano, I haven’t had any team orders from Ducati at the moment, and that’s good because I also have a small chance in the Championship,” said Bastianini. “In the last part of the championship, we will see if I have team orders or not. I am not stressed anymore!

Bagnaia then went on to say that he didn’t need team orders to win this year’s title, a comment that could very well make him look like a fool come November.

“Honestly, I don’t think I need any help to be in front,” he said. “I prefer to win on the track and not because someone lets me pass. But in any case, I am not inside this decision and it is sure that I said my desire [to Ducati] which is to let me do what I want to do.

A real disaster was narrowly avoided on Thursday evening when the Marc VDS garage went up in smoke as the teams left the track and returned to their hotels. During a heavy downpour, water seeped through the roof and onto a starter, which then short-circuited, causing an electrical fire to start.

Aprilia, whose garage was parked next door, sounded the alarm. Track security and local firefighters quickly extinguished the blaze and recovered the gear inside, including bikes and loose parts. Suzuki’s MotoGP team, also positioned next door, then helped clean up and rebuild.

Sam Lowes, Marc VDS Moto2 rider, said: “We have to say thank you to Suzuki. Without them, stopping the fire early would have been difficult. In the end, there was no major damage. Both bikes were OK. Another team came to help us and afterwards they helped with the cleaning. That’s what makes you proud of MotoGP. You don’t even know some of the other people and they did a great job helping us when they didn’t need it.”

This begs the question: what would have happened if the fire had started late at night, when all the other teams had gone home?

As well as hitting the back of Marc Marquez and suffering his second DNF of the year, Fabio Quartararo’s Aragon GP was notable for another reason. The Frenchman’s leathers came undone on the fall, split open and left him sliding on the asphalt off the track with his chest exposed.

The 23-year-old had multiple abrasions on his abdomen, thankfully none of them deep or severe. After further investigation, leather manufacturer Alpinestars discovered that Quartararo’s airbag had deployed correctly. However, as he fell first on the asphalt, his chest was struck with some force by the front wheel of his bicycle. As the leathers were already stretched by contact with the asphalt, the zipper was stressed to levels the Italian company had never seen before.

Quartararo said injuries weren’t affecting him on the bike on day one at Motegi. “It was a bit strange at first because it burns a bit, but after the first few laps you adjust and it’s nothing. So it doesn’t affect my riding,” he said.

Jack Miller set the tone in a Ducati Lenovo Team one-two in an extended opening practice session for the MotoGP peloton at the Motul Grand Prix of Japan. The Australian set a time of 1:44.509 in his late attack run at Mobility Resort Motegi to finish FP1 0.028 seconds clear of teammate Francesco Bagnaia, the in-form World Championship rider. However, the man who still leads the title race, Fabio Quartararo (Monster Energy Yamaha MotoGP) took third place and Aleix Espargaro (Aprilia Racing), a close third in points, finished fourth on day one in Japan. . On the other hand, Enea Bastianini (Gresini Racing MotoGP), winner of the GP of Aragon, was only 14th after a late crash.

Moto2 World Championship leader Augusto Fernandez got his Motul Grand Prix of Japan weekend off to a good start with the fastest lap in FP1. Amid light showers at Mobility Resort Motegi, Fernandez clocked a 1:50.493 to finish 0.084 seconds ahead of Somkiat Chantra. Just as first and second were Red Bull KTM Ajo and Idemitsu Honda team Asia respectively, so was third and fourth in the form of Pedro Acosta and Ai Ogura, the latter just second in the title chase as he begins his test at home. .

MT Helmets – MSI’s Diogo Moreira set the tone in FP1 for round 16 of the Moto3 World Championship, the Motul Grand Prix of Japan. Moreira went as fast as a 1:57.252 in the first 40-minute session around Mobility Resort Motegi, finishing ahead of Dennis Foggia of Leopard Racing and one of the Japanese riders in the field, Ayumu Sasaki of Sterilgarda Husqvarna Max. World Championship leader Izan Guevara is currently in the top 14 for Q2, but fellow Autosolar GASGAS Aspar team driver – and title rival – Sergio Garcia finished 17th fastest in FP1 and hoping for dry conditions Saturday morning.