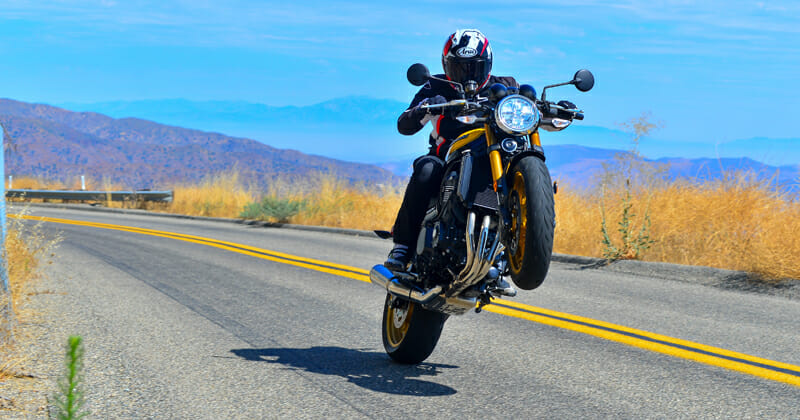 An icon from another time inspires today’s generation. No, we’re not talking about Steve Jobs; we are talking about the Kawasaki Z1 and the fantastic Kawasaki Z900RS SE 2022.

Few motorcycles have left their mark on the subculture quite like the Kawasaki Z1. Not quite the original Japanese four-cylinder (that honor goes to the 1969 Honda CB750), the Z1 could easily be called Japan’s first superbike, the machine that set us on the path we’re on today with over 200 horsepower four-cylinder. pot criers.

The Z1 is one of those machines that has transcended the scene, earning a level of pop culture status usually reserved for gear like a Ford Mustang. Kawasaki knocked it out of the park so much, both in terms of timing and execution, with the Z1 that they have tried to get back to that level ever since and never quite got there.

The Z1 may have been created around 50 years ago, but as they say, a classic never goes out of style. So, in 2017, the board of directors of Kawasaki Heavy Industries in Japan decided to create a Z1 for the modern age. Using the Z900 as its base, the Z900RS channeled the lines and styling of the original, but with most of the mod-cons you’d hope for like fuel injection, modern suspension and decent brakes.

I spent most of 2018 with a Z900RS, and it was a year of fond memories. I absolutely loved this bike, except for the poor throttle response that I constantly complained about due to the emissions throttle.

We threw a few choice pieces at our Z900RS Project, like gorgeous gold-forged aluminum Dymag wheels, bits of Yoshimura like a fender eliminator, Dunlop Q3s and a nice Akrapovic titanium muffler for a bit more bark. It was a gem of a bike.

Fast forward to 2022, and I just spent a month familiarizing myself with the Z900RS in its new $13,449 SE form. This year, Kawasaki celebrates its 50th anniversary. and as such created a separate model to mark the occasion, but the good folks at Kawasaki USA gave me the SE model which comes with the beautiful ‘Yellow Ball’ paint scheme, gold wheels ( they must have noticed the Z900RS project), gold forks, four-piston Brembo 4.32 monoblock brakes and an Ӧhlins S46 monoshock that comes straight from the sportier Z900 SE.

The engine remains largely unchanged from 2018, except for one thing: the throttle response no longer feels like you’re firing a machine gun. It’s a point I brought up with Kawasaki while discussing the new bike, repeatedly asking what had changed for that to be the case, but all I got was a shrug and a wink. Kawasaki undoubtedly changed something in the mapping to smooth out the initial throttle response because, going through my old press kits, Kawasaki just copied and pasted the 2018 engine description for 2022. Hmm.

Whatever Kawasaki did, it made low-speed riding much more enjoyable. Low-rpm throttle openings from full close – for the most part – no longer encounter jerk at the twist grip. It’s impossible these days to get that old-school smooth, creamy throttle response that a perfectly balanced set of carburetors will give you, thanks to the various emissions hoops that companies like Kawasaki have to deal with, but the The 2022 iteration is a marked improvement over the original 2018 model in this regard.

If you have ever driven a Z900 (we have), you’ll know this is an engine that likes to spin in Kawasaki’s traditional four-cylinder direction. That green villain won’t start until you’re at least 4000 rpm, but the same engine in Z900RS SE form has already picked up the pace at this point. Shorter duration intake and exhaust cam profiles help here, and combined with the 12% heavier flywheel, the Z900RS SE produces more torque and pulls harder than the Z900SE up to 7000 rpm more linearly.

The Z900RS SE doesn’t give that sense of urgency that the sportier Z900SE does. Instead, it prefers cruising at medium speed, using all that torque in third, fourth or fifth gear to float from corner to corner without having to constantly dance on the shifter. It’s more relaxed, and that’s a good thing.

However, it’s not perfect. Considering we live in the modern age, I wish Kawasaki had fitted the quickshifter that the Z900SE also lacks. The shifting is a little agricultural, and while no misfires were encountered, it’s a heavier shift than I would have liked. I can live without cruise control (although that would be nice too), but I think quick shifting should be standard with any model with SE after its name.

That’s the only downside to the Kawasaki’s engine and gearbox equation, and the rest of the machine looks great. The ride quality offered by this Ӧhlins S46 is a marked improvement over what I remember from 2018 (the front end is unchanged except for the gold coating on the fork), and the Brembo brakes offer bite and grip. decent performance. They could be a bit better, as the ABS kicks in too early for my liking under heavy braking, but overall braking performance is good.

Perhaps the best thing I love about the Z900RS SE is the ergonomics. It’s an old-school 50/50 fore-aft riding position with almost no weight on your wrists, so you can ride longer without hurting yourself.

Compared to the sporty 900, the handlebars are 65mm higher and 35mm closer to the rider, and the rubber-mounted footpegs are 20mm lower and 20mm further forward. Comfort is the name of the game here, with the package rounded out by this 1970s-style bench seat that wouldn’t look out of place in a ’69 El Camino SS.

More than anything, the Z900RS SE exudes the kind of style that I love. It’s (in my opinion) the best of the retro-styled machines offered by manufacturers today, and there’s good competition in this category from Triumph, BMW and, to some extent, Yamaha – although I would argue I think the splendid XSR900 is more modern than retro.

It’s not perfect; no bike is. However, I don’t think I could find anyone who would go for a ride on a Z900RS SE and not at least like it, if not like it. It’s that kind of bike. NC

Click here for the latest Cycle News Reviews and news about Sportbike motorcycles.