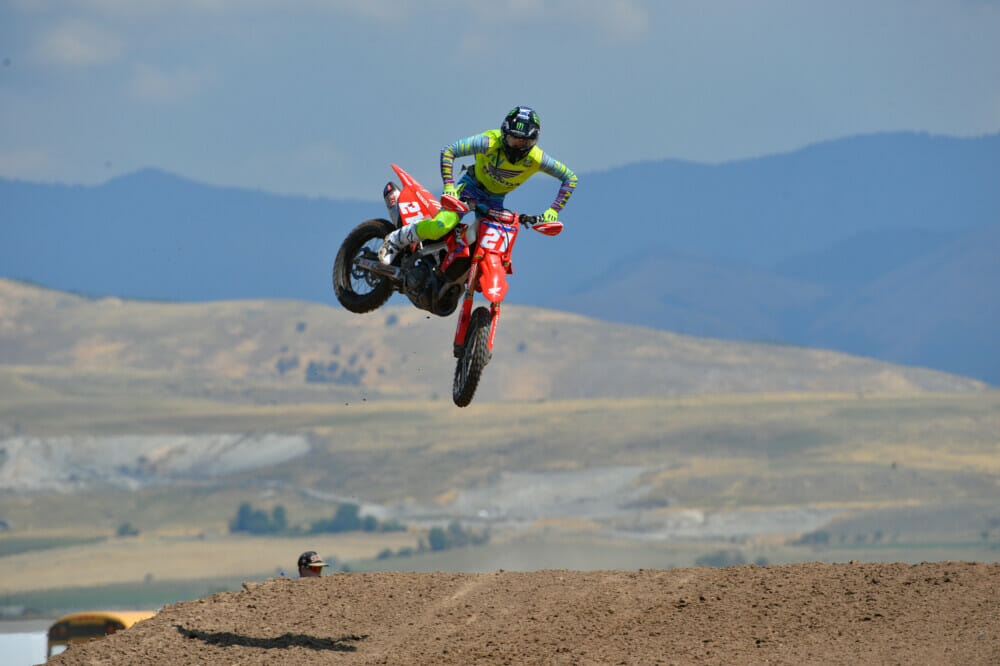 After the AMA National Amateur Motocross Championship at Loretta Lynn’s Ranch, Chance Hymas of Idaho decided he wasn’t 100 percent ready to compete in the Lucas Oil Pro Motocross Championship just yet. So instead of going to turn 10 in Budds Creek, Maryland, he drove less than two hours to Cache Valley MX Park to do some high-intensity endurance training by competing in the Dynamite Grand Prix (a reference to the Napoleon Dynamite film which was shot primarily at Preston High School), round seven of the FMF AMA National Grand Prix Championship (NGPC) series.

It turned out to be a good call, as the teenager led the 90 minutes on his HRC Honda/Monster Energy/Fly Racing backed CRF450R to win $2,000 of the $8,000 purse on Dare Demartile of LiquiMoly Beta and Chaparral Motorsports/Precision Concepts Kawasaki Tyler Lynn. Hymas is the first non-regular entrant to win in several years.

Series points leader Dante Oliveira got off to an unusually poor start, with the FMF KTM Factory off-road racing team star finishing fourth on the podium for the first time this season. However, he still fared better than title rival Cole Martinez, with the Slam Life Racing (SLR) Honda rider also recovering from a poor start to finish sixth and drop a further three points behind Dante, the standings now. 180-163. Rockstar Energy Husqvarna’s Austin Walton split them with his fifth-place finish and holds third place with 143 points.

” It was good ; I felt really good,” exclaimed Hymas. “I’m going to race the Combine at Ironman next weekend so it was a good confidence booster for me.”

Anyone who thought motocross wouldn’t last 90 minutes was wrong as Hymas set an unparalleled pace, although there were some slight weak spots in his game.

“Honestly, my goal was to sprint all the time. On my first lap, I didn’t ride very well, I was trying to attack,” he admitted. “I’m a motorcycle guy, so I like the ruts. I’d go out for the tough guys [flat turns], and I didn’t know how to shoot, so these guys got up on me. I was making a lot of mistakes but I got back to the moto track and knew I could swerve there then corn [field section] started bitching, so I started not wasting as much time as before.

Early on, Lynn stayed within striking distance aboard his Dunlop/Maxima/Leatt KX450X, although he gave in to Demartile on lap three and stayed there for the rest. Still, Lynn was pleased with her best NGPC finish to date, saying, “It’s exciting! I just got off to a good start. Start, I struggled with everything this year, and I worked on it. I had a good first lap and then got a little bloated afterwards, but was able to put on a good charge in the second half.

For Demartile, the GP Dynamite marked a year since its first NGPC and solidified its affinity for mixing MX, flat alfalfa fields and cornfields. While his bike suffered a technical failure during his third-place finish last year, he put that behind him this weekend, building on the work he and Beta did during the summer break.

“I did a few motorcycle races and worked on sprint speed. We did some tests on the bike and got better parts,” he said. “It was a really good break so I was happy and I was ready. I’m really enjoying this place.” It showed, as he raced in second place aboard his Beta 480 RR, eventually finishing 40 seconds behind Hymas and 16 ahead of Lynn.

In Pro II, Mateo Oliveira (FMF/RPM Racing KTM) appeared to be heading for his seventh straight win of the season until a technical issue ended his race prematurely. That was all Kai Aiello needed to claim his first NGPC Pro II triumph aboard his 3 Bros/Kilmartin Racing Husqvarna FC 250.

“Not the way I wanted to take it, but it’s nice to see that [my] the pace was much better after the summer break,” he said. Mateo still leads in Pro II points over Aiello, 180-151, and both planned to fly to France on Monday to join the rest of the US ISDE team.

Speaking of Six Days, current Pro Women’s champion and points leader Brandy Richards is already in France with much of the squad, leaving the class to win.

JCR Honda’s Tarah Gieger was only too happy to grab the holeshot and lead the majority of the way, but the former champion crashed out with two laps remaining. This gave 3 Bros/Kilmartin Racing GasGas loader Ava Silvestri her first-ever Pro Women win, with Gieger retaining second and Silvestri’s teammate Lauren Woods third.

Second in points before the round, Silvestri’s first victory sees his match, Richards, top the points table with 180 apiece heading into the eighth round in October.