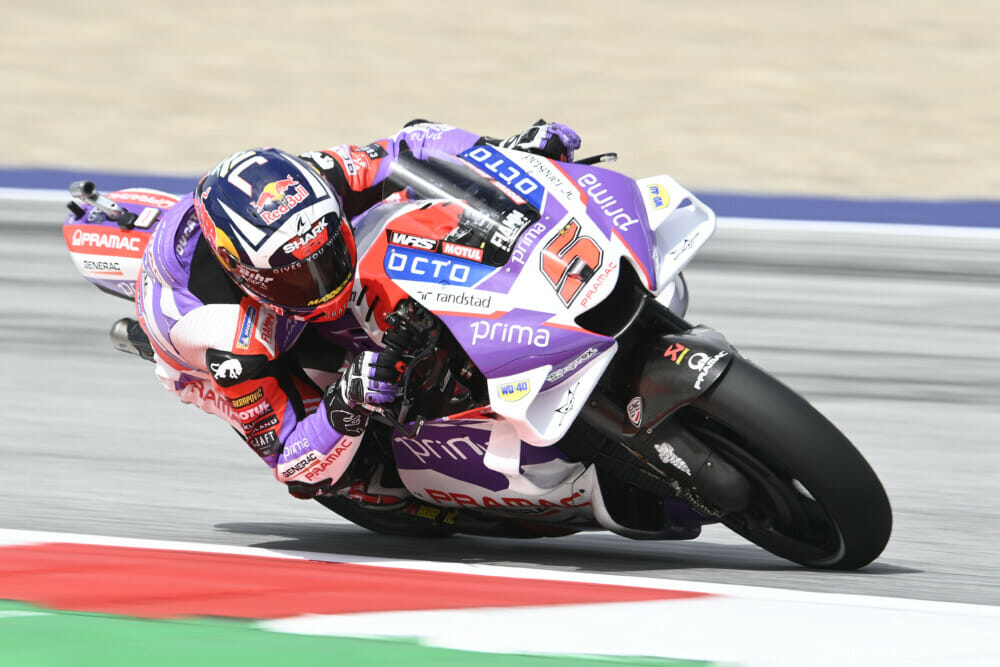 Mark back in the paddock

Marc Marquez was back in a MotoGP paddock for the first time since undergoing surgery on his upper right arm on June 3.rd – the member’s fourth major operation in 25 months. He was in Austria to assess the current failings of Honda, bottom of the constructors’ championship, and his ’22 Honda RC213V.

“I had the experience of 2020-2021 where I was a long time without coming to the circuits. And during this period, I disconnected too much and when I came back, everything was too new. So this time I tried to keep a lot of contact with Santi, with Stefan Bradl, especially with my team. Of course, my brother also rides Honda, but I prefer to keep this close relationship with my team, with the Honda engineers and one of the reasons for being here is not to see the bikes on the track. It’s to talk with Honda, the engineers, to get involved in the project.

Regarding his recovery, the 28-year-old admitted, “In the end it’s an arm with four operations. We are working to adapt in the best way, but at least now it works in a normal way, I am already now doing an exercise that was impossible before. He has also announced his intention to race again in 2022. But only if a check-up next week allows him to speed up his rehabilitation. “Until next week when I get the doctor checked, that’s when they will decide if I’m allowed to push more or not. And if they allow me to push more, that’s at that time we will make a plan and we will immediately understand when I will return.

GASGAS partner of Tech3 in MotoGP

Tech 3 will become the GASGAS Factory Racing team in the 2023 MotoGP World Championship, it was announced on Friday.

A majority share of the GASGAS brand – previously successful in the off-road discipline – was acquired by KTM in 2019. Since then, it has tried to increase visibility by renaming KTM machines in Moto3 to GASGAS, as well as an entry into Moto2 as Team GASGAS, despite using the Kalex chassis, with Team Aspar running the GASGAS logos in both cases.

As in Moto3, Tech 3’s machinery will be a KTM RC16, identical to the bikes of the Red Bull KTM Factory Team. The setup will be essentially the same as this year. But instead of orange, Tech 3 boss Hervé Poncharal’s bikes will ride red. Pol Espargaro will be the lead driver with the second seat yet to be decided.

KTM has not given up hope of keeping Miguel Oliveira in its ranks after motorsport director Pit Beirer admitted the Austrian factory had made a final contract offer.
Oliveira’s nose was wrecked by KTM signing Jack Miller to the factory team. The three-time race winner had previously said he would not consider staying with the Austrian factory unless it was part of his factory team. A move to RNF Aprilia has long been touted.

Still, KTM offered him better terms to stay, but on the Tech3 GASGAS Factory Racing team next year. “I had a little chat with Mr. Trunkenpolz (KTM board member) and Stefan Pierer just before the session and there is no real offer yet, but they again clarified their intention to stay in the family,” Oliveira said on Friday. “I told them I couldn’t give them an answer…Honestly, I have to think after the race what to do.”

On a dry surface after an FP1 in mixed conditions, the majority of the field improved their FP1 times from the start as a busy opening of the weekend’s second free practice session unfolded, with the threat rain and automatic Q2 places on the minds of the teams. Pecco Bagnaia climbed to the top of the table and was followed by Fabio Quartararo (Monster Energy Yamaha MotoGP) before Alex Rins (Team Suzuki Ecstar) passed fastest. The times would continue to drop.

With 20 minutes remaining, Quartararo was the leader ahead of Rins and Joan Mir (Team Suzuki Ecstar), the top 10 being covered in less than half a second. The clouds were approaching and with 10 minutes remaining on the clock there was a big rush into the pit lane to set off on cool soft rubber as light rain began to fall. And that meant bad news for title chase runner-up Aleix Espargaro (Aprilia Racing), as the Spaniard sat outside the top 10 in P11, so it was potentially crucial for Espargaro to get into the provisional spots of the automatic Q2.

Espargaro’s first effort put him in P6 while Martin and Zarco moved up to P1 and P2, with Miller improving but remaining P3. Miguel Oliveira (Red Bull KTM Factory Racing) crashed unscathed between the penultimate and final corner, as Martin, Miller and Zarco swapped P1 in quick succession.

Ducatis then locked the top six with four minutes to go as Francesco Bagnaia (Ducati Lenovo Team), Enea Bastianini (Gresini Racing MotoGP™) and Marco Bezzecchi (Mooney VR46 Racing Team) moved up the standings, but the lap time of Bastianini was then chalked off when stopped. Luca Marini (Mooney VR46 Racing Team) and Brad Binder (Red Bull KTM Factory Racing) were well within the top 10 then before Quartararo moved from P11 to P4. Bastianini found time to leap into the top 10, which ousted Aleix Espargaro.

World championship leader Quartararo is the only non-Ducati rider to make the top eight in fourth place. He is followed on the timesheets by title rival Bagnaia, who in turn has VR46 Academy teammates Marini and Bezzecchi for company in P6 and P7 respectively. Bastianini is in 8th place ahead of FP3 on Saturday morning, the Italian ahead of Maverick Viñales (Aprilia Racing) and Brad Binder in the very important top 10.

With rain potentially affecting FP3, all eyes will be on the skies on Saturday morning to see if there is any chance of improving Friday’s efforts.

It was a 1-2 Idemitsu Honda Team Asia heading into qualifying day for the 2022 Moto2 Grand Prix of Austria as Somkiat Chantra beat teammate Ai Ogura by 0.055s in FP2 to top the Moto2 timesheets first day. World championship leader Augusto Fernandez (Red Bull KTM Ajo) was 0.311 seconds off the pace in third.

It was a good day for Cameron Beaubier (American Racing Team) who took sixth on day one, Joe Roberts (Italtrans Kalex) was 13e and Sean Dylan Kelly was 26e.

Leopard Racing’s Dennis Foggia set the fastest lap after the first dry-weather Moto3 session at the new Red Bull Ring – Spielberg. The Italian set a 1:41.774 with the checkered flag on FP2 at the 2022 Moto3 Austrian Grand Prix to secure top position in what could prove a crucial Q1 and Q2 line-up session on Saturday after- midday. Deniz Öncü (Red Bull KTM Tech3) finished second with a set lap time just before being involved in an accident with Lorenzo Fellon (SIC58 Squadra Corse) while John McPhee (Sterilgarda Husqvarna Max) took third. The two AutoSolar GASGAS Aspar team pilots, Izan Guevara and Sergio Garcia, entered the top 14, which could be particularly important given the threat of rain when FP3 takes place the following morning.

The FIM Enel MotoE World Cup resumed after its summer break and Eric Granado secured a well-deserved first pole position of the season at the 2022 Austrian MotoE Grand Prix. The LCR E-Team rider is second in the standings, with just two heats to go to try and pass Dominique Aegerter (Dynavolt Intact GP MotoE), and the 1:41.390 he set in Q2 at the Red Bull Ring – Spielberg gives him the best chance of doing so. Mattia Casadei (Pons Racing 40) and Matteo Ferrari (Felo Gresini MotoE) will join Granado on the front row, while Aegerter is expected to move away from fifth in both races this weekend.