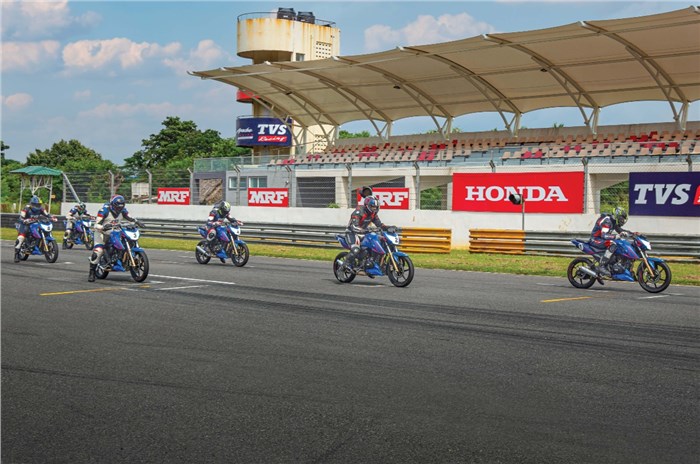 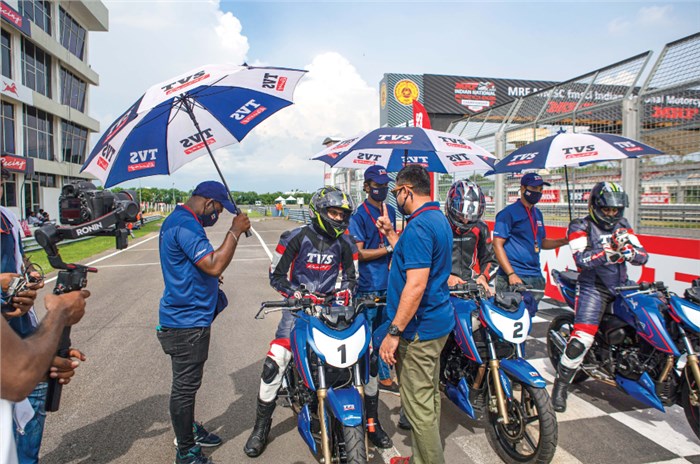 HK Pradeep from TVS Racing reminding me in which position I finished the race. 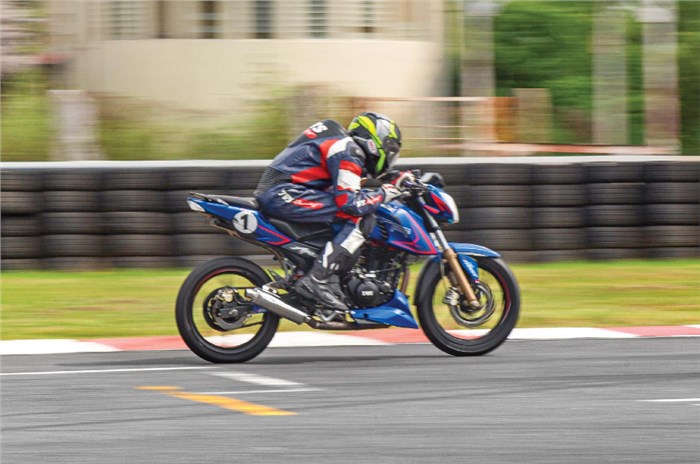 The championship final will take place in February.

With a victory in Race 2 as well, Soham Thakur looks set to win the 2021 TVS Young Media Racer Championship.

So far, the 2021 TVS Young Media Racer program has brought its share of thrills and excesses. From the first qualifying sessions, having never raced on the track before, until almost losing the victory in Race 1 because of my excessive enthusiasm, it was quite a journey!

Race 2 of our championship was scheduled to take place on the third race weekend of the 2021 Indian National Motorcycle Racing Championship (INMRC) at the same location as before, the Madras Motor Race Track near Chennai. While the whole setting was now familiar to me, from the track to the bikes and my competitors, there was a noticeable difference this time around. The authorities had introduced digital flags around the track and a digital timer on the start / finish line, much like we have seen on FIA Grade 1 circuits around the world.

The weekend followed the same format as last time around, with practice and qualifying on Saturday and the race on Sunday. The long 30 minute practice session allowed me to get to know the racing TVS Apache RTR 200 4V again and to my surprise it didn’t take long to get up to speed. Within a few laps I felt confident enough to start accelerating for faster lap times. At the end of practice, my fastest lap in 2: 20.9 was faster than my fastest lap in Race 1, which was in 2: 21.4. And there was still a long time to find, I felt.

The training even allowed me to determine the start of the race. After my fiasco at the start of Race 1, I was determined not to make the same mistake again this time around. So after a brief masterclass with Harry Sylvester from TVS Racing, I finally got off to a good start. 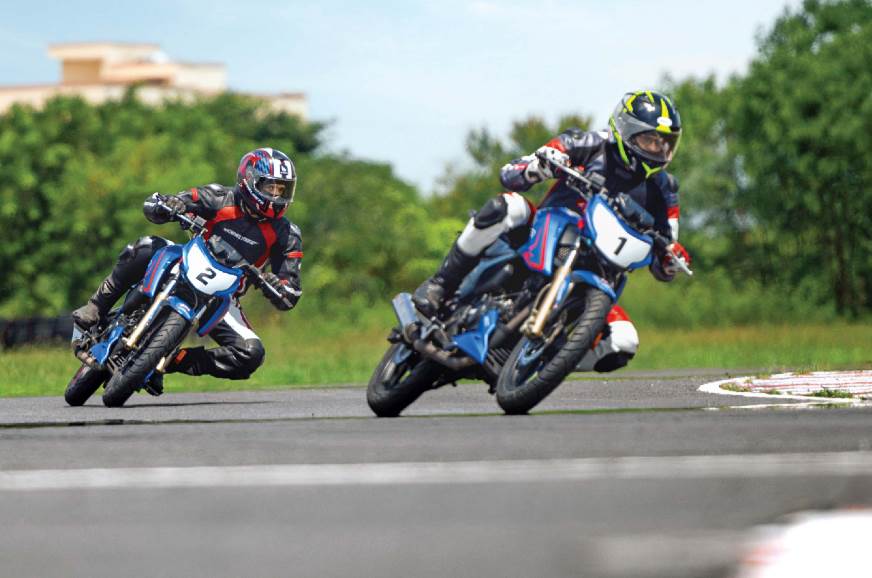 Body positioning is far from perfect in the turns, but I feel like I’m improving.

Qualifying allowed me to further improve my lap times as I had predicted. I qualified from pole position this time too, clocking 2: 18.7 and my closest competitor being 1.4 seconds behind. The new digital stopwatch on the start / finish straight also helped me keep track of time remaining in the session, making it easier to decide which laps to push.

Race day had arrived and we ended up hitting the track a bit early to watch some of the INMRC races. The talent on display was incredible, with many wheel-to-wheel races and near-race finishes. After that, it was time to get dressed for our run.

Unfortunately our race was due to start at 2pm in the sweltering heat. By the time I had even sat down on the bike to get to the grid, I was completely drenched in sweat. It is important to fill up with fluids before setting off as there is always a good chance of cramping in the latter part of the race.

I took my position on the grid and waited for the start. The five red lights went out shortly after and this time I started the race. The front tire even managed to take off slightly from the ground! I felt really fulfilled in the moment, having practiced departures throughout the weekend and then being successful when it came time to ask. But, there was no time to dwell on this.

Like me, even the competition had now gotten used to the scenery, so it wasn’t going to be as easy as the first race. 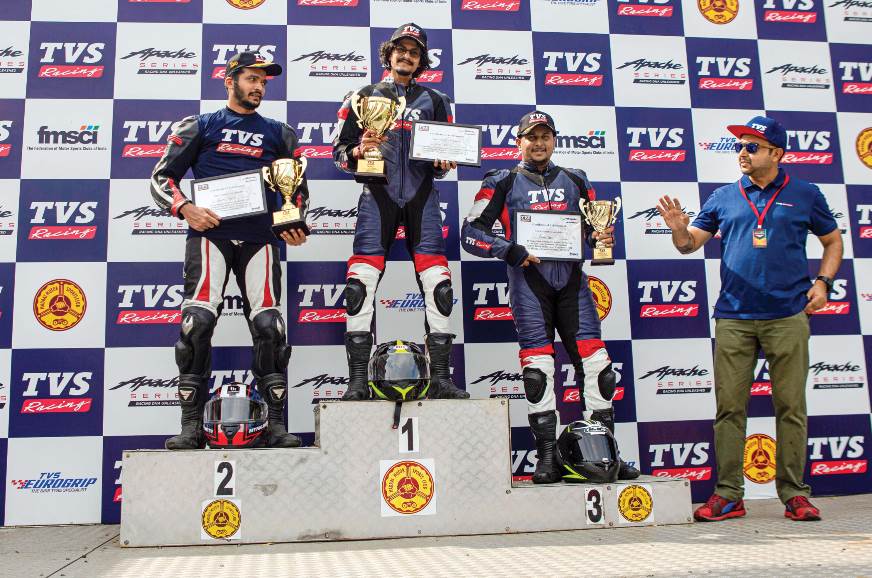 This feeling of victory never gets old. I hope to reproduce it also in the final race.

In the first corners I had to keep an eye over my shoulder as the P2 and P3 riders were just behind. But, by the end of the first lap, I had picked up the pace and started to slowly build a gap. During the race, I even managed to put one knee on the tarmac for the very first time. Sure, it was confusing at first, but it soon became natural and even a faster way to attack a corner after that.

My fastest race lap was 2: 16.5, marking a 2 second improvement over my qualifying time and an improvement of almost 5 seconds over my fastest lap in Race 1. And I crossed the finish line first, about 10 seconds ahead of my closest competitor.

While the improvement was encouraging, I was far from the times set by professional riders on the same machine. And while I know they’ve been training and practicing for years, my competitive side doesn’t let me rest on my laurels. I will definitely try to get as close as possible to their times on our last race weekend.

Overall I was pretty happy with my performance on this second weekend of racing. It took me very little time to get used to the bike and the track and a lot of things I had to consciously think about earlier – like positioning my body and keeping my toes on the footrests – had almost become like muscle memory.

Still, I feel there is room for improvement in my racing and braking lines, this is where I feel I am wasting more time. But I’m glad I got the win, which gives me the best chance of winning the championship in the next round.

For now though, it’s a long and agonizing wait until February for our last race. Until then, I hope to continue working on my fitness, while continually honing my highway driving skills (within reason!).