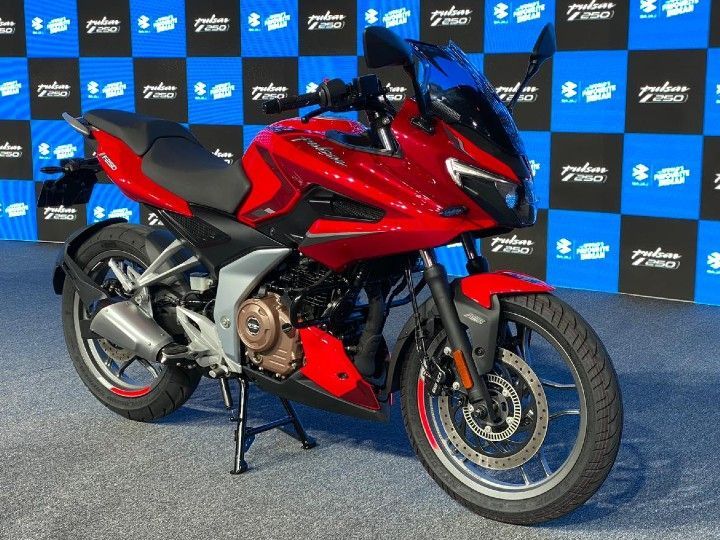 The Bajaj Pulsar 250 twins are FINALLY here, with the Pulsar N250 priced at Rs 1.38 lakh and its streamlined counterpart, the Pulsar F250, at retail at Rs 1.40 lakh (both ex-Delhi showroom). With that settled, let’s take a closer look at the biggest Pulsar to date:

Let’s start with the Pulsar N250. In between, this one targets the quarter-liter streetfighters segment.

Up front it receives a bifunctional LED projector lamp as well as stylish LED DRLs. Although the fascia is aggressive, it seems somewhat inspired by the Yamaha MT-15, which might bother a few people.

Complementing the aggressive fairing, muscular tank fairings extend all the way to the front fork. And to add even more muscle, Bajaj added a muscular belly to the mix.

For a comfortable riding position, the Pulsar N250 features a one-piece flat handlebar.

Coming to the Pulsar F250, it replaces the Pulsar 220F and sports a semi-fairing (sharper than the 220F), true to its heritage. The fairing also comes with a tall windshield, a slightly different headlight design with eyebrow shaped LED DRLs, and a raised clip-on handlebar to suit its sporty outfit.

Everything else is common between the two bikes. Features include a semi-digital instrument cluster, USB charging port, full LED lighting (yes, indicators, too), and a slip-and-assist clutch, the latter two being the first bits of the segment in that range. price.

The instrument cluster is similar to the Pulsar NS200It’s but has more information (including range and a gear position indicator) and looks a lot more premium.

The engine is housed in a new tubular frame, suspended by a telescopic fork and a single shock absorber. Meanwhile, the braking prowess comes from a larger 300mm disc up front and 230mm disc in the rear. The bikes only come with a single channel ABS option, however, which is disappointing.