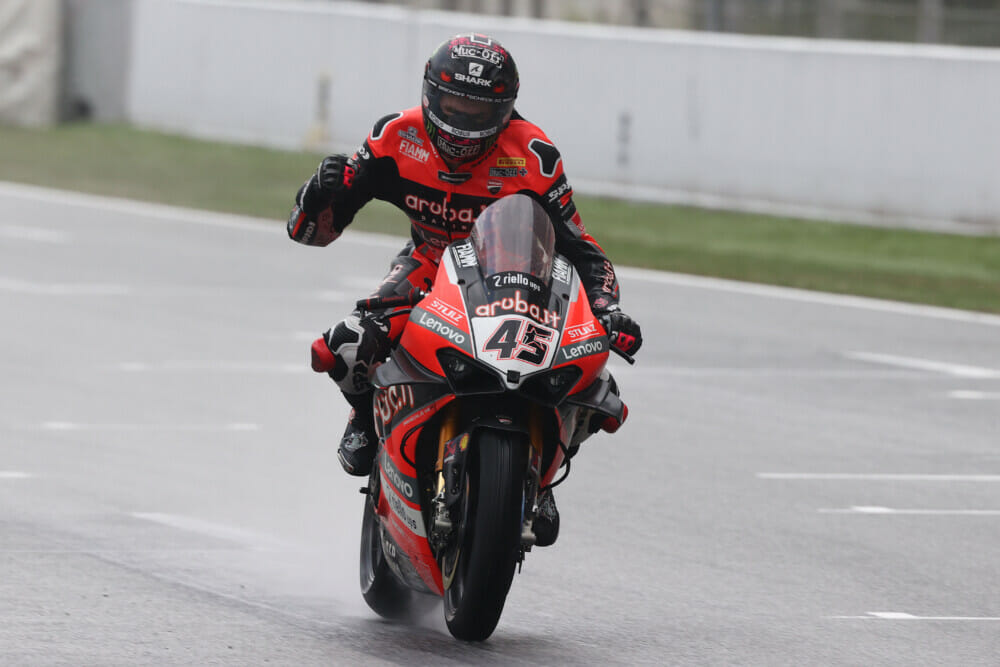 An astonishing series of events followed the first adverse event, as the rain reappeared shortly before the start of the opening weekend of the WorldSBK Race of the Catalunya.

The wet track race was surprisingly unpredictable from the start, as first leader Toprak Razgatlioglu (Pata Yamaha WorldSBK Team) was quickly joined and then passed by Jonathan Rea (Kawasaki Racing Team), but only after a few protagonist overtakes in the championship.

With the action of the rain as a leveler in some ways, rookie privateer Axel Bassani (MotoCorsa Racing Ducati) got involved in fights with Razgatlioglu as they both passed Rea on the lap before lap 13.

Rea seemed to be losing momentum as the race ended.

Razgatlioglu, in Yamaha’s 60th anniversary red-and-white paint scheme, seemed to have won the race deservedly, but his motorcycle ultimately and dramatically abandoned him, leaving Bassani ahead for three laps.

He came with three laps of victory, but the advancing Scott Redding (Aruba.it Racing – Ducati) had to pass and work his way to a remarkable victory, as he had been outside the top ten at one point.

A superb Ducati 1-2-3 saw Redding and Bassani for the first time on the podium joined by fighter Michael Ruben Rinaldi (Aruba.it Racing – Ducati), for a hat-trick in Bologna that seemed impossible after a relatively difficult Friday for most Ducati riders.

Rea took back the championship lead from the hapless Razgatlioglu with his fourth place today, and he was followed at home by Michael van der Mark (BMW Motorrad WorldSBK Team), who seemed the likely winner until his thrust through the lead pilots was interrupted as he lost rear-wheel drive in the wet. He was fifth, the constant and combative Alex Lowes (Kawasaki Racing Team) sixth.

Rea is now six points ahead in the championship, with the ten-lap Superpole race and a second full race coming on Sunday.

As soon as things started in the 18-lap WorldSSP race, the rains came and everyone on the slick pitch was left with a decision to make. Changing tires or struggling after starting in the dry?

The track would dry up again as the rains subsided and Arbel would drop to tenth place but then finish sixth as a reward for his bet.

Without Dominique Aegerter (Ten Kate Racing Yamaha) this weekend Steven Odendaal (BARDAHL Evan Bros. WorldSSP Yamaha) led the chase pack behind Arbel for a while but Randy Krummenacher (CM Racing Yamaha) was the first to overtake the longtime leader. , in the seventh round, then fled to win by more than 16 seconds. And no Odendaal.

Odendaal and Philipp Öttl (Kawasaki Puccetti Racing) were both penalized for failing to respect the mandatory pit intervention time of 1’21 seconds, which came out too early after going in the wet. Odendaal’s loss was 25 seconds, which ruined his chance to score strong points in the absence of his big rival.

One more WorldSSP race to be contested in Catalunya on Sunday.

Tom Sykes (BMW Motorrad WorldSBK Team) completed a classic waiting lap at Tissot-Superpole to establish the best track on the revised Montmelo circuit, with his 1’40.408 set at the very end of the session.

Sykes’ lap was 0.286 seconds faster than next top rider Toprak Razgatlioglu (Pata Yamaha with Brixx) and more than half a second faster than previous Superpole perfect man-machine in 2021, Jonathan Rea (Kawasaki Racing Team).

The second row of Race 1 and the Sunday Superpole will be led by Scott Redding (Aruba.it Racing – Ducati) of Alex Lowes (Kawasaki Racing Team) and the rookie of the season, Andrea Locatelli (Pata Yamaha with Brixx) .

A final pressurized lap from Leon Haslam (HRC Honda) saw him make up for it after losing his previous best lap after going over track limits and ultimately qualifying seventh.

Jonathan Rea (Kawasaki Racing Team) was second in combined times, but only fourth in the afternoon session, even sinking into gravel towards the end.

Tom Sykes (BMW Motorrad WorldSBK Team) fell at the start of the second free practice session, after losing the lead in turn five. He still finished in fourth place due to his quick morning time, and he left for the last laps of FP2.

Michael van der Mark (BMW Motorrad WorldSBK Team), pulling smoke from his rear tire in the remodeled left turn of Tun 10-11, was expected to finish eighth. Scott Redding (Aruba.it Racing – Ducati) climbed to ninth place thanks to his time in FP2, just over half a second behind Razgatlioglu.

Long-time WorldSSP rider Raffaele De Rosa (Orelac Racing VerdNatura Kawasaki) proved to be the fastest rider of all on WorldSSP day one in Barcelona – Catalunya.

In the absence of championship leader Dominique Aegerter (Ten Kate Racing Yamaha), who is absent for contractual duties on an electric bike, Steven Odendaal (BARDAHL Evan Bros. WorldSSP Yamaha) finished fourth. The first four riders set their best times in the afternoon FP2 session, but in fifth place Philipp Öttl (Kawasaki Puccetti Racing) had to rely on his morning time for his ranking in the top five of the night.

Jules Cluzel (GMT94 Yamaha) was not allowed to ride after his concussion suffered when several riders fell at Magny Cours.