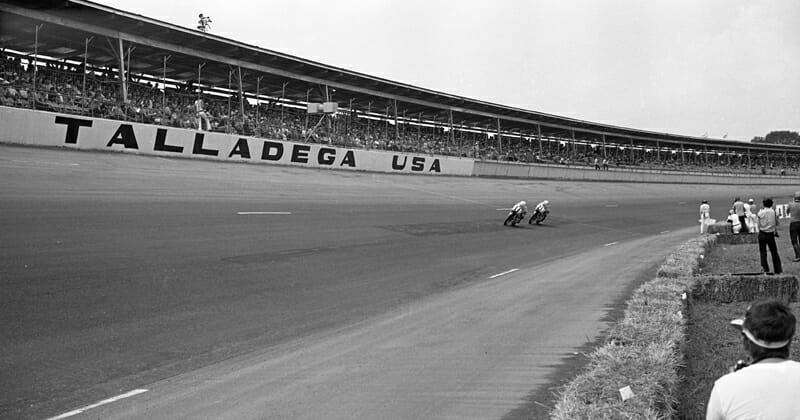 When Talladega had its own bike week

With this year’s Daytona Bike Week now in our rearview mirror, it’s a good time to look back when another NASCAR track, Talladega Superspeedway, hosted its own mini version of Bike Week. In its heyday in the early 1970s, the Talladega weekend featured national road races on the high banks of the track, with a national radio broadcast (the MRN Network) of the race, AMA National Motocross Championships on a temporary indoor track and flat track racing on a short track across from the major highway. The event drew motorcycle racing fans from across the Southeast, and one year a motorcycle gang wreaked havoc on the Alabama facility.

In the late 1960s, NASCAR and Daytona International Speedway founder Bill France was looking to build another Super Speedway. This time he wanted to go even bigger and faster than Daytona. He searched for a suitable spot through the southeast before finally landing on Talladega at the site of a former airfield. France inaugurated the new track in the spring of 1968. The still unfinished track opened a year later at a cost of $4 million. The track was named Alabama International Motor Speedway. The name would stick around for twenty years, throughout the years of motorcycle racing, until 1989 when the facility’s name was changed to Talladega Superspeedway.

According to former racer and World Superbike founder Steve McLaughlin, “Big Bill” France added the road course specifically to accommodate motorcycle racing. “Big Bill stepped in to help expand the AMA road racing schedule,” McLaughlin explained. Had it not been for the addition of Talladega, the road races of the 1970 AMA Grand National Championship schedule would have been reduced to just three events – Daytona, Loudon and Seattle.

Talladega’s motorcycle course was similar to Daytona in that it combined the NASCAR oval and a section of road course. But runners who raced there report that the incline was steeper (31° vs. 33°) than Daytona, the incline oval even wider, and the infield flowed better and featured elevation changes. It would become the fastest racetrack on the AMA National Circuit.

At the first AMA Grand National at Talladega in May 1970, qualifying was conducted by means of a flying lap around the NASCAR oval. Gene Romero took pole with a lap of 156.521 mph on his factory Triumph Trident. The big surprise in the National Main Event was rookie David Aldana taking the win on his factory BSA Triple. Aldana was an undeniable talent and fans and fellow riders knew he would be a winner, but few expected him to take his first national victory on a road course. Even Aldana admitted to being very green in terms of road racing experience at that time.

Speaking of the win, Aldana says BSA had some very special parts from the British factory.

“I had the fastest bike on the track,” Aldana said. “British bikes at Daytona have returned to the UK. My tricks went undetected due to my 12th place finish at Daytona. I was still learning from the riders around me during Talladega.

Talladega’s motorcycle course was similar to Daytona in that it combined the NASCAR oval and a section of road course.

Long stretches at full throttle have always taken a toll on the bikes at Talladega. Less than half of the starters covered the distance in this inaugural motorcycle race.

Talladega’s first event was successful enough, with 13,000 fans, that the race was moved to Labor Day weekend in 1971. It would run on that date through 1974. The race was promoted and run by the same people who raced Daytona, and after moving the date, the Talladega AMA event was the last promotion of the season for Daytona staff and Sunday night parties after the race became legendary.

Heat and humidity greeted riders and fans alike at the 1971 race. It was another early AMA Grand National winner for Yvon DuHamel on a Kawasaki. And unlike Aldana, who won a national road race before anyone thought he would, it was the exact opposite for DuHamel who everyone expected to win a national road race years earlier. . Many times since he came onto the scene in the late 60s, DuHamel has been the fastest rider and led many races, but mechanical issues, crashes, and all the other issues a rider could be confronted, prevented the popular Canadian from getting on the podium. to Talladega. It was worth the wait since Kawasaki paid DuHamel a $10,000 bounty for giving the company its first Grand National victory. DuHamel’s victory was aided by incredibly fast pit stops. His first stop lasted just four seconds, aided by the dry refueling system and a fast crew led by crew chief Bob Hansen.

A big problem that year was that the Outlaw motorcycle gang showed up at night at the trail’s campgrounds and began stealing motorcycles, sometimes at gunpoint. Alabama State Troopers and Sheriff’s Deputies showed up in force and arrested 200 gang members.

Cliff Cook was one of those campers and remembers the Outlaw gang incident. He said law enforcement suddenly showed up in large numbers and were lined up around the campground guns.

“They were used to suppressing civil unrest in the daytime and absolutely took control,” Cook said. “When they were done, they had a bunch of guns and a bunch of drugs. Also, they used school buses to take the outlaws to jail and no one used the word “pig” to criticize them. »

DuHamel returned and won again in 1972 in front of 18,000 fans, this time lapping the entire field except for Kawasaki teammate Gary Nixon. With the purse and contingencies, DuHamel won $18,300 (over $122,000 in today’s dollars), the biggest prize money the race would ever see.

An AMA Motocross National was also held on weekends, at the Daytona Supercross, in 1972 and 1973, adding to the fan appeal. In 1972 the winners were Gary Bailey (250cc) and Brad Lackey (500cc). In 1973 it was Gary Jones (250cc) and Pierre Karsmakers (500cc). A large flat track region also took place on the nearby short track and attracted many top flat track racers.

For the 1973 race, a chicane was added to the backstretch to slow down the bikes. The big 750 Kawasakis and Suzukis had a blazing top end (with trap speeds of over 170 mph), but they all faltered in the race, and it was Kel Carruthers on a Yamaha TZ350 who took the win and led a Yamaha sweep with Steve Baker and Gary Fisher rounding out the podiums. Almost unbelievably, Carruthers was not only racing, but was Yamaha’s race director and ripping off the team’s bikes throughout the weekend.

The last AMA Grand National held at Talladega was in 1974. Kenny Roberts took victory in the race which was shortened from 200 miles to 75, which meant no pit stops. Barry Sheene rode the 1974 event and finished fourth on a Suzuki. For some reason the crowds dwindled rapidly in 1974, so the race was dropped from the schedule in 1975.

AMA Superbike racing returned to the track for four years from 1980 to 1983 and, with the exception of the 1980 race, was held the weekend after Daytona. Eddie Lawson won the 1980 Talladega revival on his factory Kawasaki Superbike. In ’81 it was Freddie Spencer on a works Honda, Lawson and Kawasaki again in ’83 and Mike Baldwin closing the Superbike era on the track in ’84 with a win on his works Honda. While the race returned, the crowds did not return, and the event was again suspended for several years.

The circuit’s national motorcycle racing history ended in 1988 and 1989 when the track hosted a Pro-Am-style weekend that included only AMA 600cc and 750cc Supersport races, as well as AMA National events. Endurance. At this time, the inside section of the track was neglected and in ruins. Michael Barnes reported that “your bike’s paint and your knuckles suffered from the rocks”.

“I remember it felt like Daytona was on steroids,” he said. “Very fun infield with lots of character. It was quite narrow in places with some small elevation changes. There was a really fun right hand corner which was probably my favorite corner. We loaded my Yoshimura bike into Cary Andrew’s Hypercycle van and rode from California to Alabama. Without Cary taking me on and being my mechanic, none of this would have been possible. Huge thanks to him for probably my biggest road race victory. The 1989 750 Supersport series was loaded with talent. This was my first and last trip to Talladega. Sweet memories.” NC