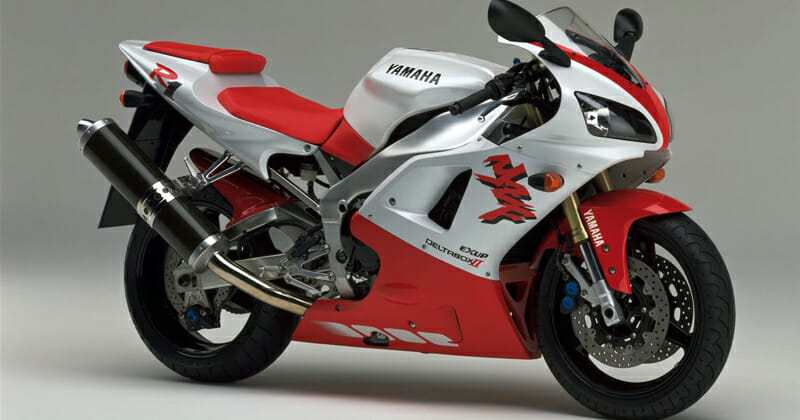 We are in 1998. Yamaha launches the first edition of the YZF-R1. The world press is shocked and the company cannot meet the demand. Waiting lists are reaching six months for salivating customers and Yamaha’s rivals have been caught with their pants down.

The 1998 Yamaha YZF-R1 is the ancestor of the modern Superbike. Until its release (and for some time after), Superbikes were classified as 750cc four-cylinder machines and 1000cc twins. World Superbike would retain these rules until the end of 2002, but in reality the world had moved on by 1998. The R1 saw to that. The R1 also saw the death of the liter class hyperbike of the 90s (an overly exaggerated term common at the time for anything larger than a Superbike), which arguably started when Teo Baba released the mighty 1992 Honda CBR900RR Fireblade.

Sport bikes back then were primarily designed as road bikes, not racers with lights. The R1 was the first to take that way of thinking and throw it away. Comfort has been reduced to the bare minimum in the name of pure speed. Even things like a handy under-seat trunk – like the Fireblade had – were considered unnecessary. Anything that didn’t need to be there was scrapped. The 998cc R1 was designed to be the lightest, shortest and most powerful machine ever created in the 1000cc class. It was designed to handle the agility of the company’s YZF600 ThunderCat (then its main Supersport 600 machine) but has power levels normally reserved for WSBK factory riders Scott Russell and Noriyuki Haga. A sporty roadster, the R1 was not.

A clean sheet of paper

The mid-90s was a dark time for Superbike sales, and Yamaha realized that while the long-running YZF750 was a good performer on the right track, the sales success did not reflect that. As such, designer Kunihiko Miwa was given a blank sheet of paper to build a new Supersport machine, just as the Yamaha YZF1000 ThunderAce was refreshed in 1997.

The ThunderAce had always been a reliable performer for the Tuning Fork brand, and the 1997 version was indeed a fine machine. It had plenty of power from the five-valve transverse four-cylinder engine that could trace its heritage to the 1989 FZR1000, with a well-balanced chassis and good ergonomics, but it was still in the Suzuki GSX-R1100 weight class and would barely do like a runner with lights.

That being the case, Miwa-san took the base YZF1000 engine and tore it to pieces. The R1’s engine was still expected to retain the company’s hallowed five-valve cylinder head, but that’s about where the similarities between it and the ThunderAce ended. Miwa-san concluded that the traditional engine layout where the crankshaft, driveshaft (countershaft sprocket), and mainshaft were all aligned was a drastic waste of space, so he came up with the design ” 3-axis”, where the mainshaft was offset and positioned above the crank and countershaft sprocket, closer to the crank. This new design was quickly embraced by the industry and is now the only way to go if you want to build a serious four-cylinder Superbike through the frame. The new design also meant that the clutch could now be mounted higher, with the cylinders and housing cast as a complete unit. This also allowed Miwa-san to coat traditional cast iron cylinder liners, with the bores now treated with Yamaha’s patented electro-deposited low-friction ceramic coating. Even the layout of the oil filter and cooler has been redesigned, sitting side by side at the front of the block rather than being stacked, as conventional thinking goes. This gave Miwa-san the ability to mount the four-into-one exhaust system headers – with a revised version of the EXUP (Exhaust Ultimate Powervalve) system – closer to the engine, giving it more space for the front wheel and therefore making the front even more compact.

The difference between the R1 powerplant and that of the ThunderAce wasn’t just the external size. Internally they may have shared the five-valve head, but the R1’s inlet ports were smaller and inside the head were smaller valves at a steeper angle, all in the name of increased gas flow.

The blocks were also different, with the R1’s bore and stroke measuring 74 x 58mm compared to the shorter 75.5 x 56mm stroke figures for the ThunderAce. Below deck, the crankshaft came in for the weight loss treatment. Yamaha engineers managed to reduce the crank’s reciprocating mass by 22 percent, which was a major factor in the R1’s impressive throttle grip. New connecting rods swung from the crank with lightweight forged aluminum pistons.

These were still the days before fuel injection became commonplace in production sportbikes, and rather than leapfrogging the pack by installing EFI, Yamaha instead opted to supply their new weapon with 40mm BDSR Mikuni carburettors, which were 30mm narrower than the ThuderAce’s 38mm units. . The R1 used a throttle position sensor, which was also linked to the CDI unit, gear position indicator and EXUP valve, and programmed to increase available torque from 4-8000rpm. min.

Getting all that tire grunt was a new six-speed gearbox, replacing the ThunderAce’s five-speed. That new gearbox became one of the few weak spots in the 1998 R1’s armor, but thankfully Yamaha’s engineers were wise and for 1999 – even though the model was only to have an update. paint scheme update – they installed a redesigned shift linkage and increased the length of the shift shaft to keep it from slipping out of gear, especially second gear. The 1998 R1 was also subject to a worldwide recall, with several instances of the clutch-driven gear drive plates breaking, causing the engine to stall.

But whatever the flaws, whatever angle you looked at the new engine from, it was a class ahead of everything in 1998. The smaller, lighter, faster design specification certainly was respected. The new motor was 81mm shorter front to back than the ThunderAce and 20.9mm shorter top to bottom. However, unlike the engine, the chassis did not have a modification platform. It was to be all-new – shorter and lighter, with racier geometry than anything with a front headlight.

Yamaha claimed the new bike weighed 390 pounds dry, which when you add a tank of fuel would put it near the 440-pound mark. With the engine being so small, Miwa-san could focus on mass centralization much more than ever. The engine was a fully stressed member of the chassis, which helped to reinforce the rigidity of the whole. The new chassis, called Deltabox II, weighed 2.8 pounds less than the ThunderAce and, with a 22.9-inch swingarm, resulted in a final wheelbase of 54.9 inches, which was 2.7 inches less than the ThunderAce .

The Deltabox II chassis was composed of cast aluminum in a twin-spar layout. Miwa-san came close to the ideal 50/50 weight distribution mark, and even went to the trouble of saving around 47% on overall handlebar weight! The tank incorporated a lap weld to allow it to sit further into the top of the frame, and the fairing was fitted with racing-style quick-release clips to allow the rider to quickly remove it if necessary.

As for the suspension, Miwa-san opted for fully adjustable 41mm inverted forks, offering 5.3 inches of travel. That was about 0.5 inches longer than the rest of the competition, with Miwa-san noting that the extra travel reduced the fork’s tendency to overshoot under hard acceleration.

Rear suspension duties were taken care of by a fully adjustable Bilstein monoshock using Yamaha’s Monocross linkage system. Significantly for future collectors, the suspension is fully rebuildable (the original Fireblade’s suspension is not) – good news, especially considering how badly some 1998 R1s were hammered in the process. over the years.

Even though the R1 was a technically superior machine to anything on the market at the time, it also changed the way people style sportbikes. Much like the Honda CBR900RR did in 1992 and the Ducati 916 in 1994, the R1 made people stop and ask, “What the hell is that?” Design in the 90s, especially after the appearance of the 916, changed very little until the R1 arrived in dealerships. Indeed, Honda went straight to the drawing board and brought out the dramatically and aggressively redesigned 2000 Fireblade 929, and Suzuki immediately began designing the bike that would eventually move the R1 to the top of the line. tree of sportbikes, the 2001 Suzuki GSX-R1000. It took Kawasaki until 2004, with the first edition of the ZX-10R, before they even started taking a look at it.

Such was the impact of the first R1, it is still revered as one of the most important sports bikes ever released. Ask many non-motorcyclists and they might not know what a ZX-10R or CBR1000RR is, but you can almost bet they’ve heard of an R1. That’s because the R1 simply tore the competition to pieces from 1998 to 2001. It rightfully earned a reputation as a fearsome machine, built for experts and it undoubtedly caused its fair share of bone and broken bodies as little mortals tried to take the R1 to its limits and got stung. The 1998 Yamaha YZF-R1 is truly a machine that has earned its place in motorcycle history. NC