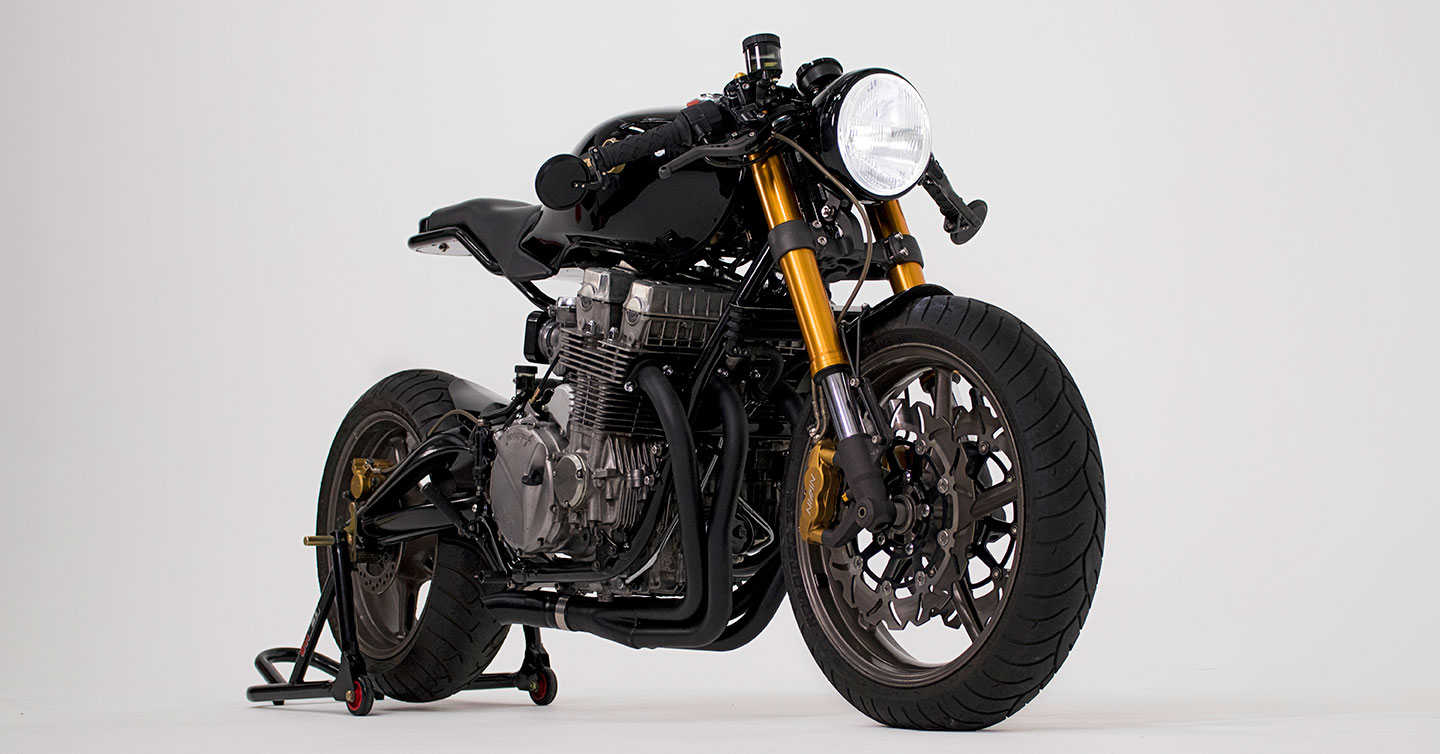 The first generation The Honda CB750 has an unparalleled reputation. It’s one of the greatest of all time and a game-changer for the Japanese motorcycle industry.

You wouldn’t want to be messing with a mint SOHC machine from the 70s, but later generations were a bit of a mixed bag. In particular, DOHC bikes from the 90s are fair game, like this 1993 CB750 Nighthawk. 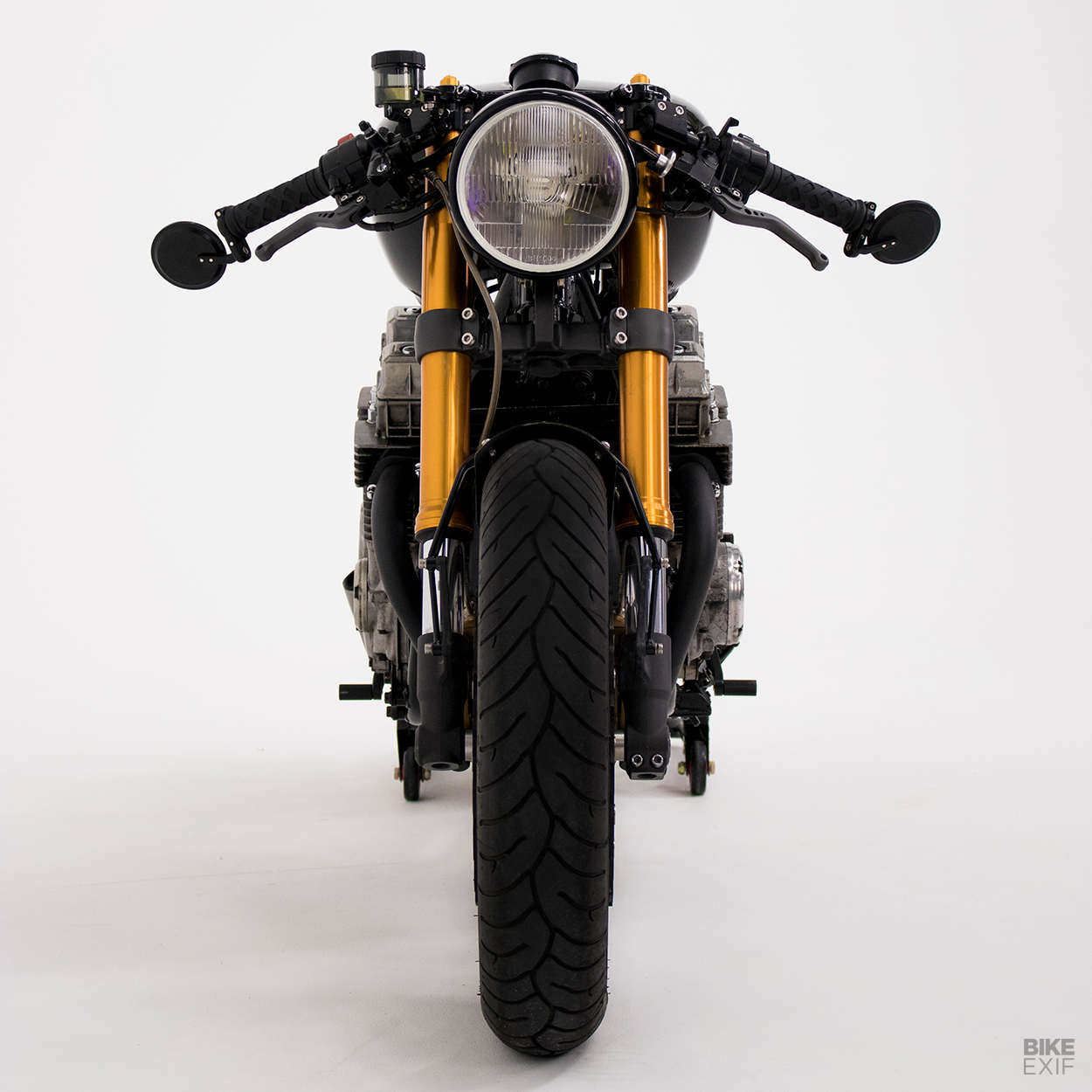 This cafe racer comes from Colin Darling, a mechanical engineer from Ashland, Oregon who enjoys building customs in his spare time. “It allows me to step away from the life of a carpet walker a bit, get my hands dirty, and use engineering in a very creative way,” he tells us.

“It’s a personal build, for now. I sold my last build shortly after it was finished and immediately regretted it, so I’m going to keep this CB750 for a few seasons. 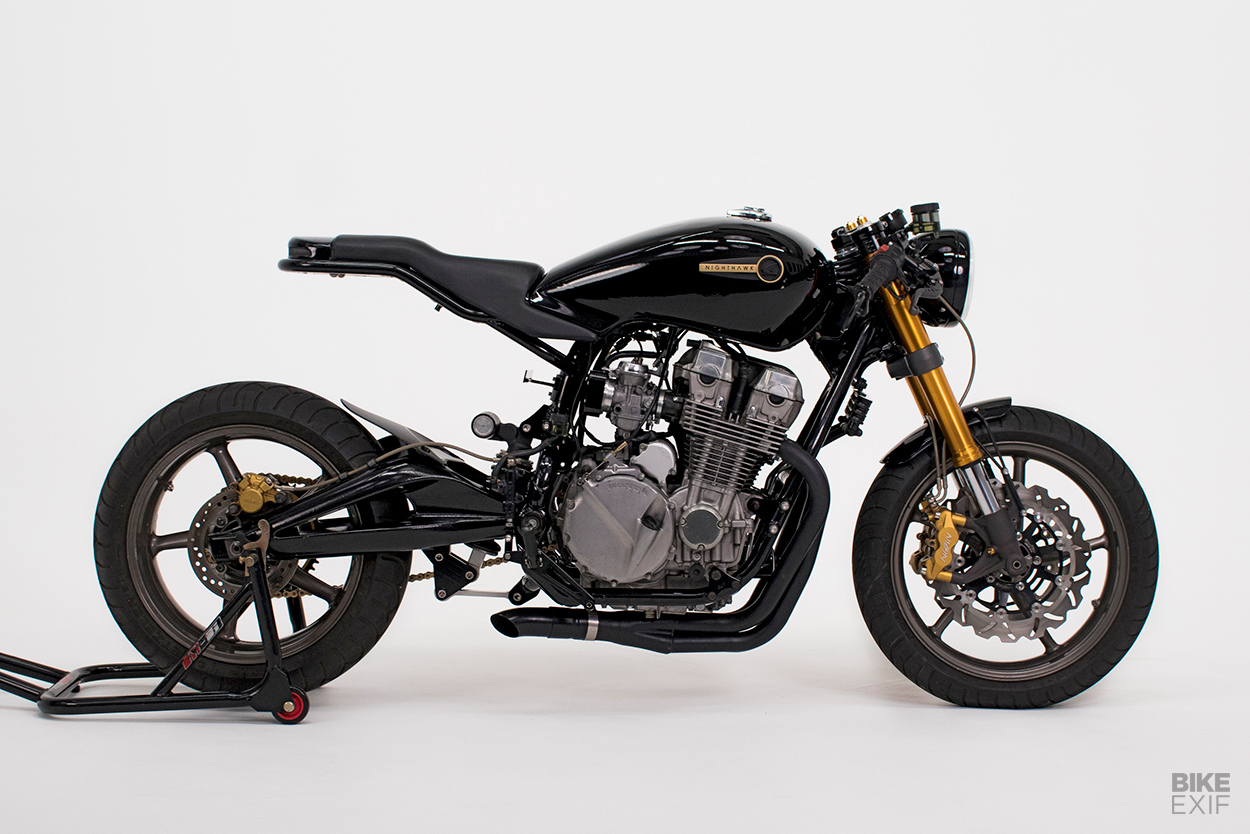 The donor bike was a bone stock 1993 CB750 Nighthawk salvaged in Texas. “I’ve always been a fan of Honda engines. They are only as complicated as necessary and seem to work,” says Colin. “I knew this bike was going to get a major overhaul, but I wanted it to still exude that simplicity.”

“The CB750 of that era was odd – in that it was a bitchy engine wrapped in tame geometry and soft, uninspiring components.” Colin wanted his creation to ride like a modern sportbike, so he started with new suspension and brakes from the Triumph Daytona 675. 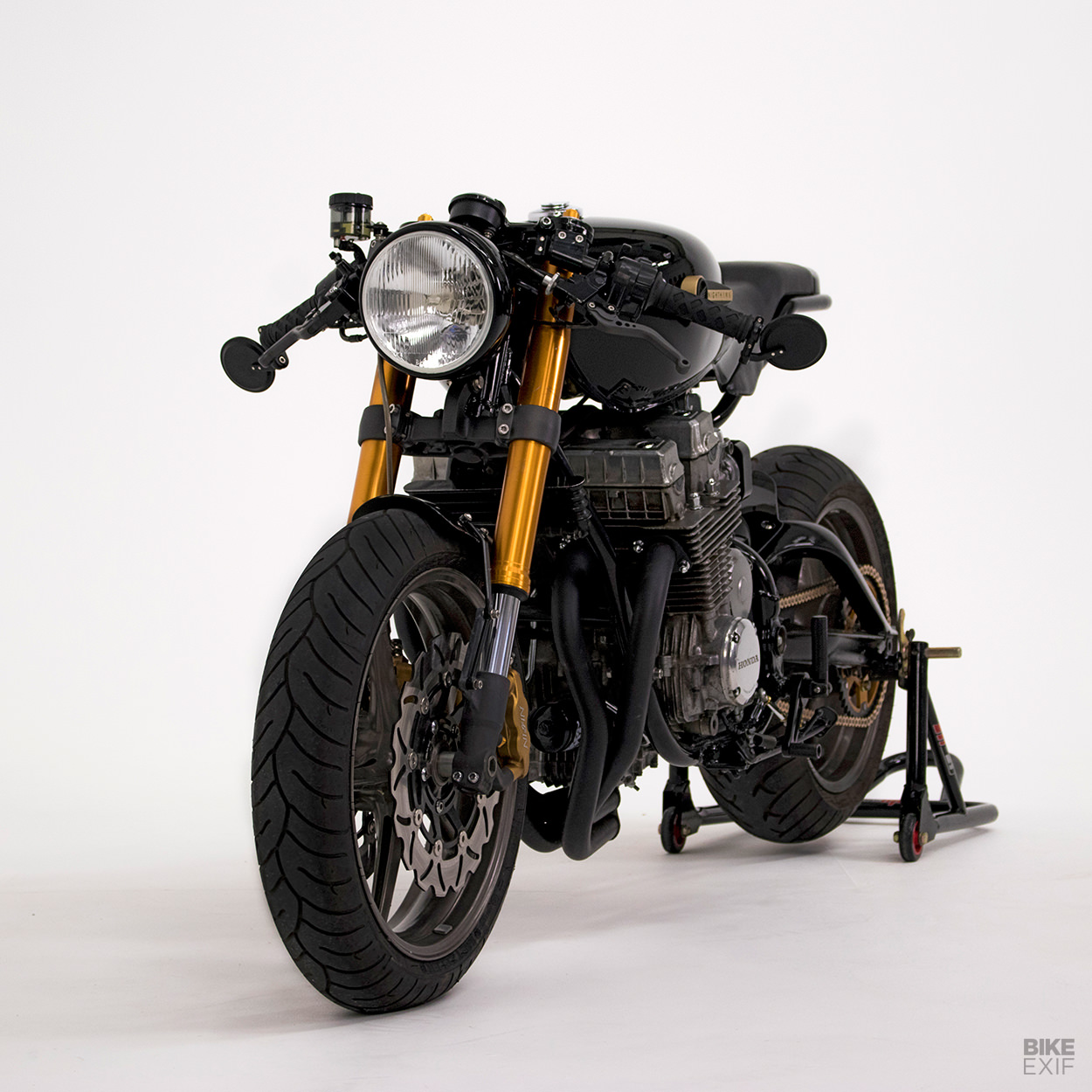 Installing the rear suspension was much more complicated. “The 1993 CB750 has a twin-shock setup, so converting to a single-shock is pretty much a baseline effort,” says Colin. 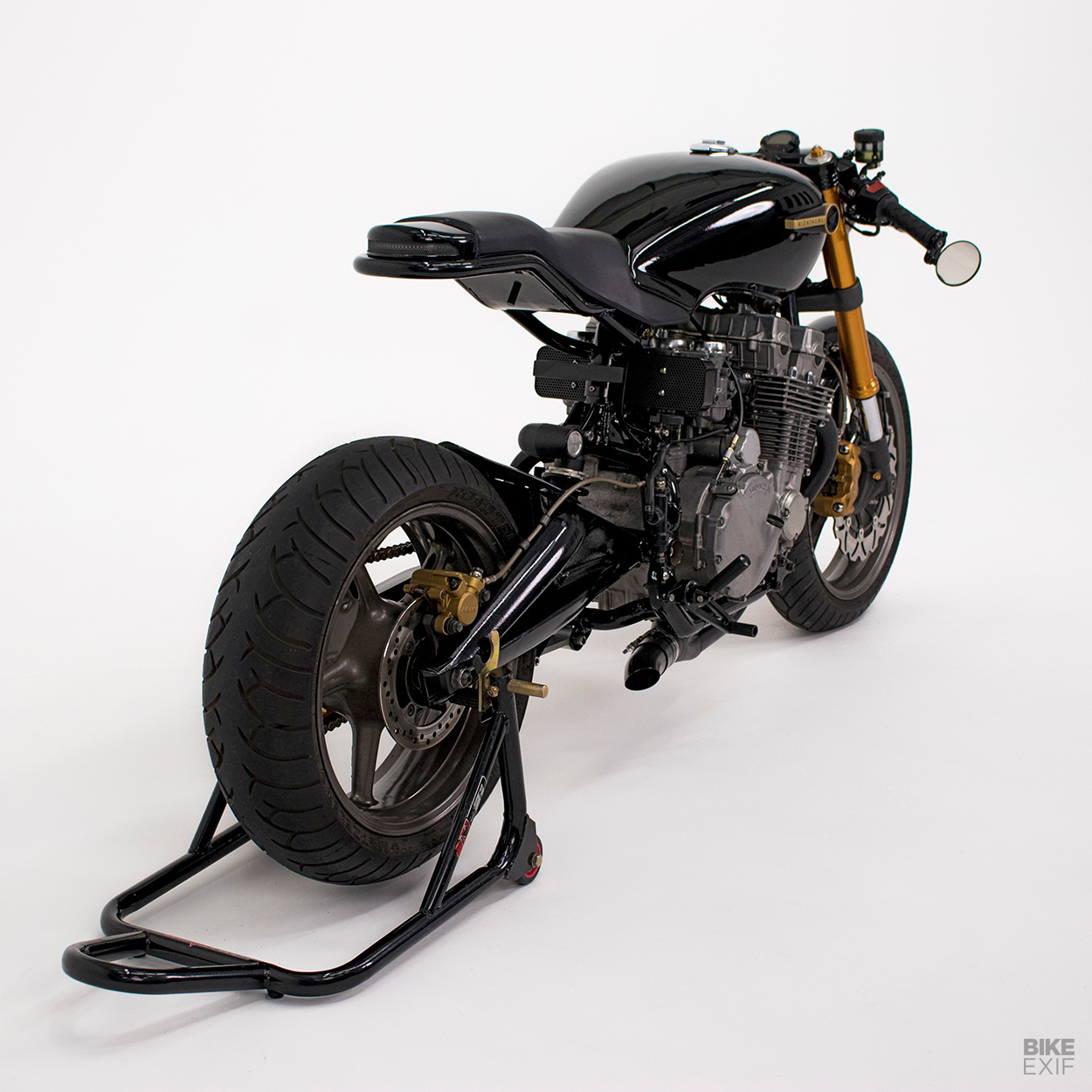 Once the Daytona swingarm was mated to the CB750 frame pivot, Colin did a simple CAD pivot point diagram so he could get an idea of ​​where the mounting points needed to be. Then he CNC machined new steel mounting tabs and aluminum rocker plates.

The shock itself comes from a 2014 Suzuki GSX-R750 and is a huge improvement over the stock Nighthawk suspenders. 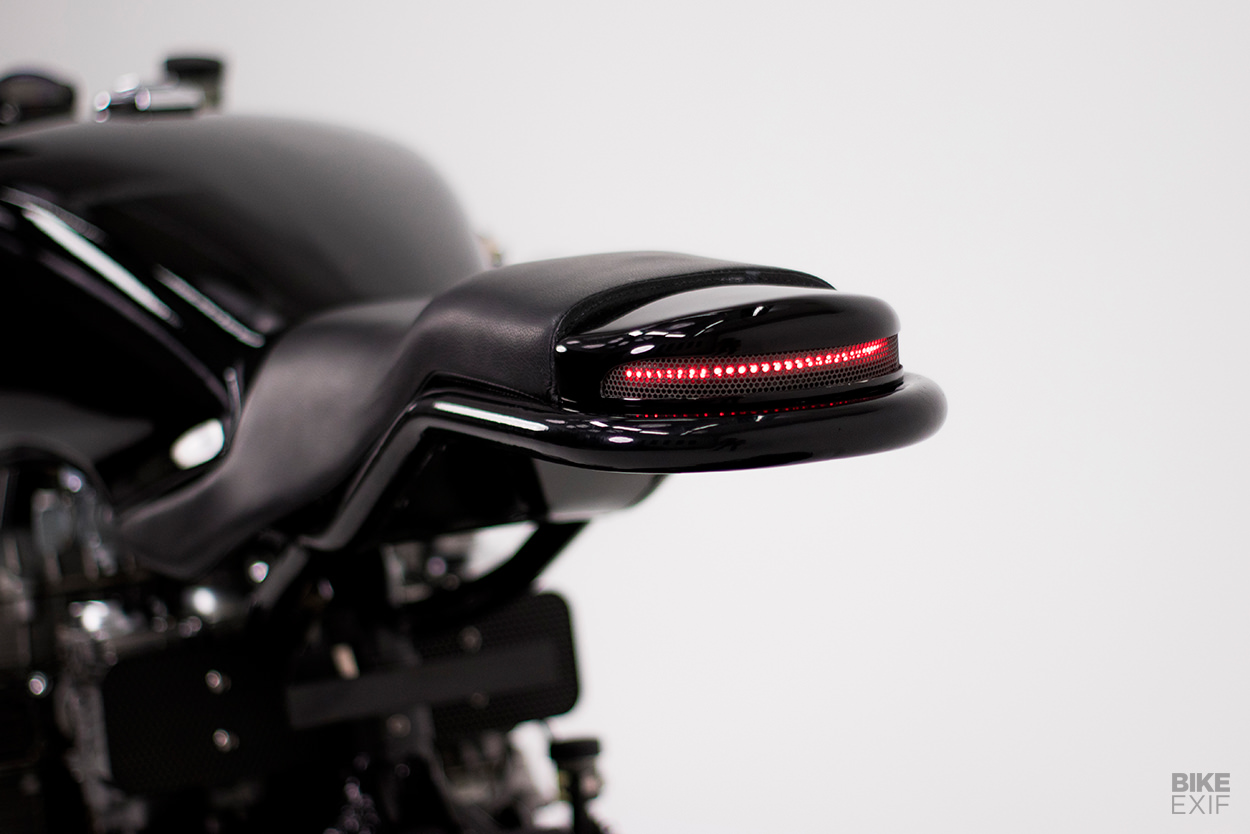 The monoshock conversion also meant a new rear subframe. So Colin designed and built one that also houses the electronics and battery, despite its slender silhouette. The rear light is an integrated LED hidden behind the perforated plate in the rear section.

The subframe now carries a custom seat wrapped in Spinneybeck’s ‘Volo’ leather, an ultra-premium European cowhide. The padding was handled by Don Desroches of Austin, TX, and Colin raised the rear tank mounting point slightly to meet the new seat and deliver the lines he wanted. 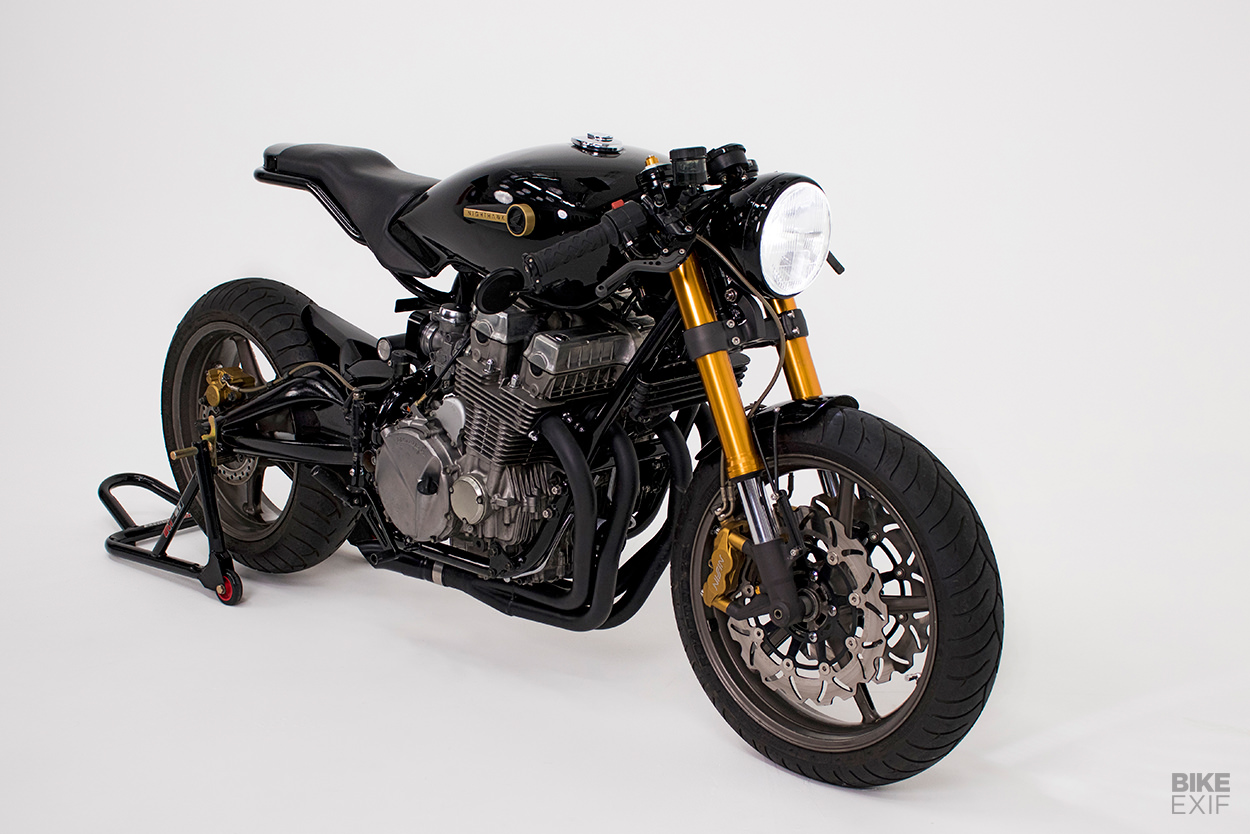 Honda got it right with the Nighthawk engine, which delivers a smooth 75 horsepower using four Keihin carbs. Colin added CNC-machined air cleaner housings and an aftermarket 4-into-1 exhaust with a bias-cut tip, which he tweaked slightly.

The carbs were readjusted to fit, and for a little more fun around town, Colin pushed the final drive up to 2.76 with a new rear sprocket. A VX3 DID chain helps minimize transmission loss. 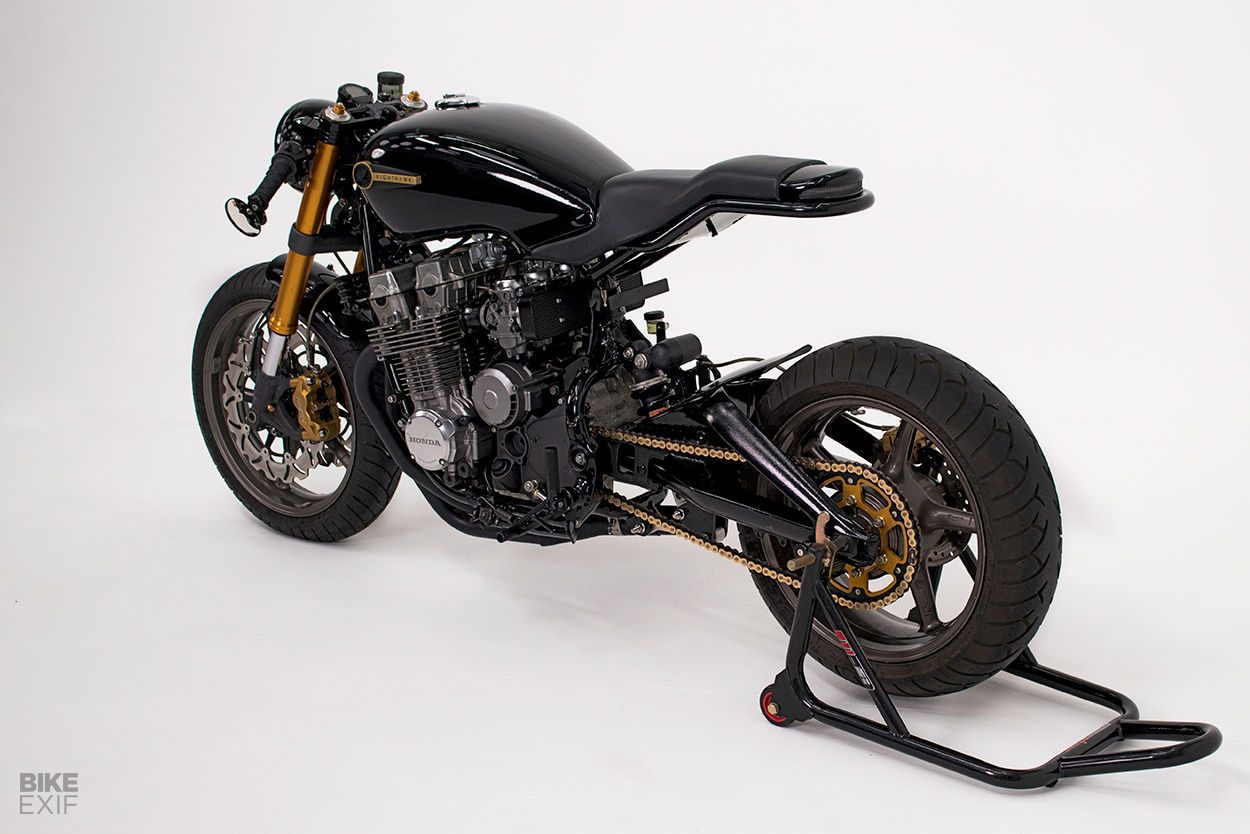 For lighting, Colin opted for a classic Bates headlight with a conversion lens that works with a 6K LED bulb. And the chunky instrument cluster has been streamlined with a 72mm Koso digital gauge. 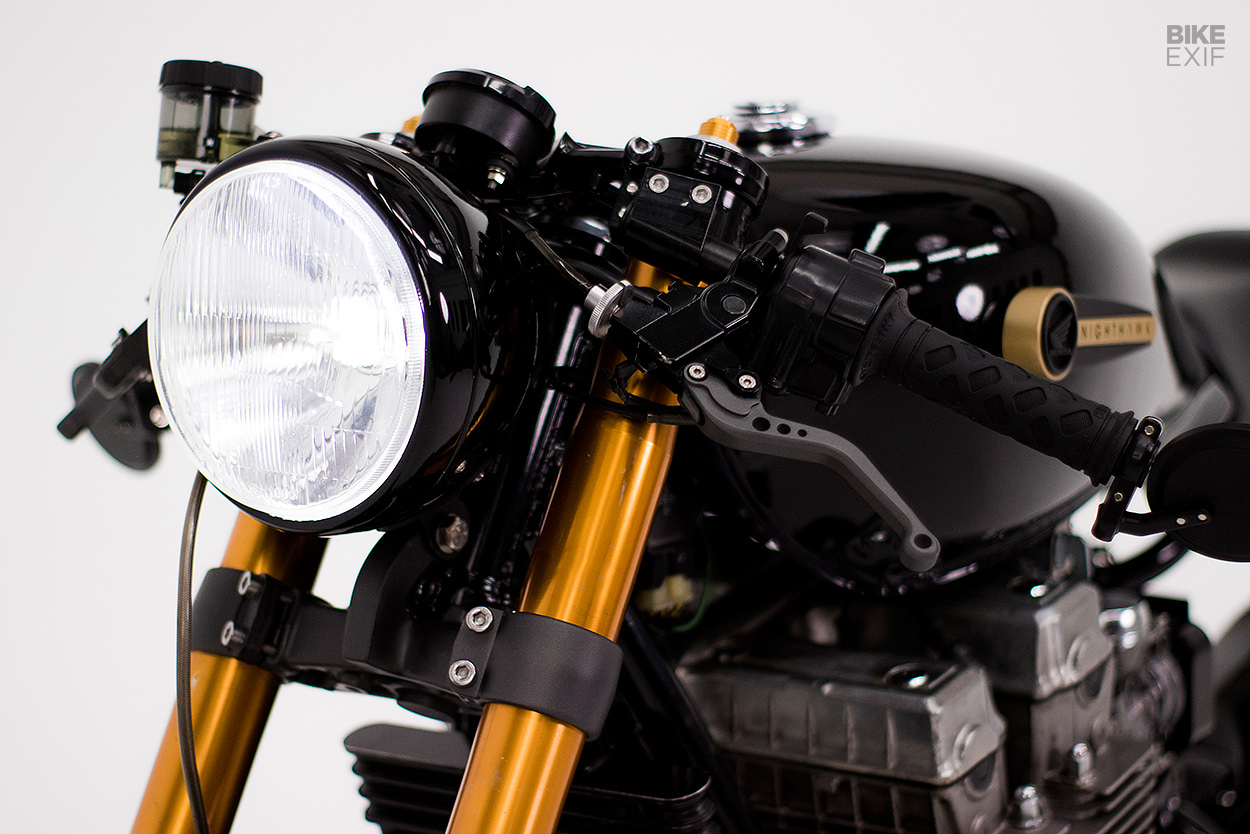 Painting turned out to be tricky. “I tried a few different paint jobs on the bike – two-tone, stripes, etc,” Colin reveals. “They all made it look too busy, and I didn’t want the focal point painted.”

The solution was a simple non-metallic black, with a glossy clear coat. “It adapts incredibly well to the rest of the bike. Subtle color has been added with 3D printed tank badges and ceramic coated end caps throughout. 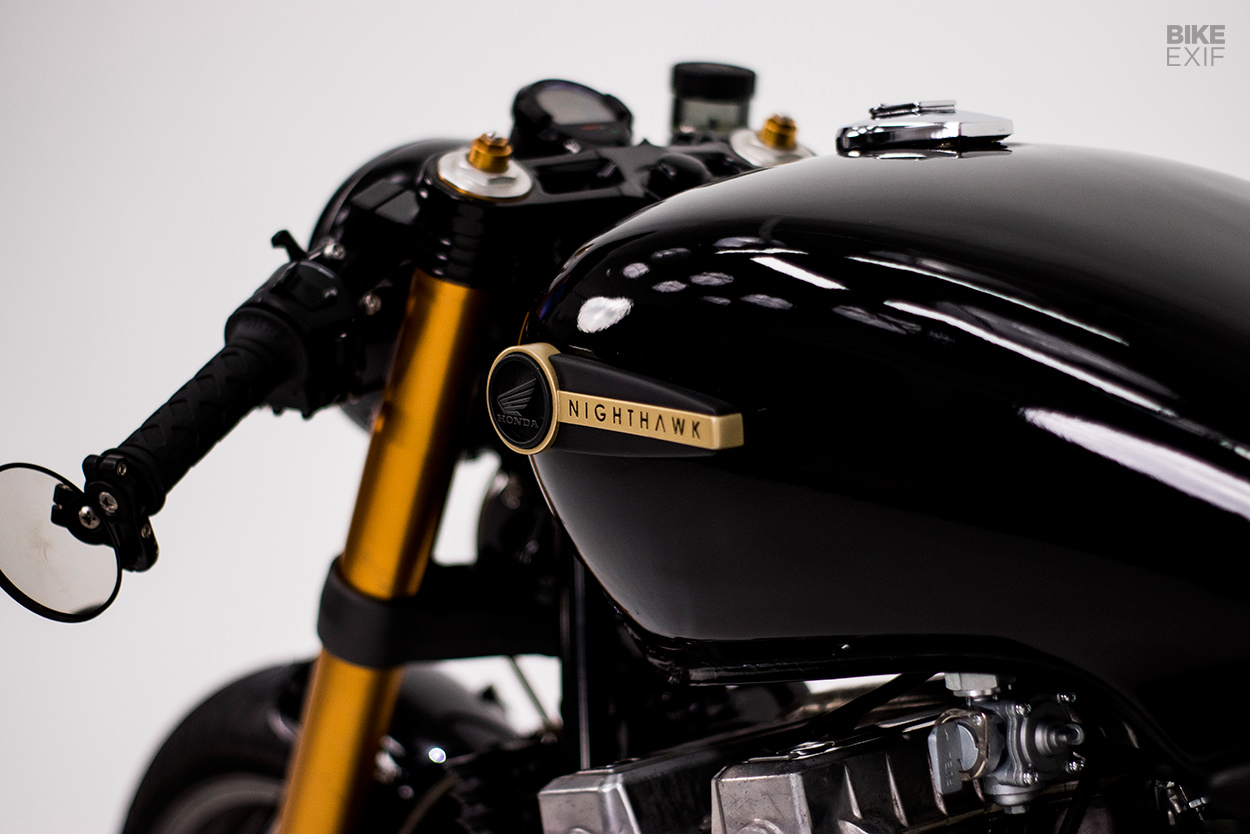 These days, if you’re in the United States, you can get a good Nighthawk for just two or three thousand dollars. That makes it one of the biggest bargains in the custom scene, especially considering the quality (and longevity) of Honda engines.

Anyone else feel inspired to try? 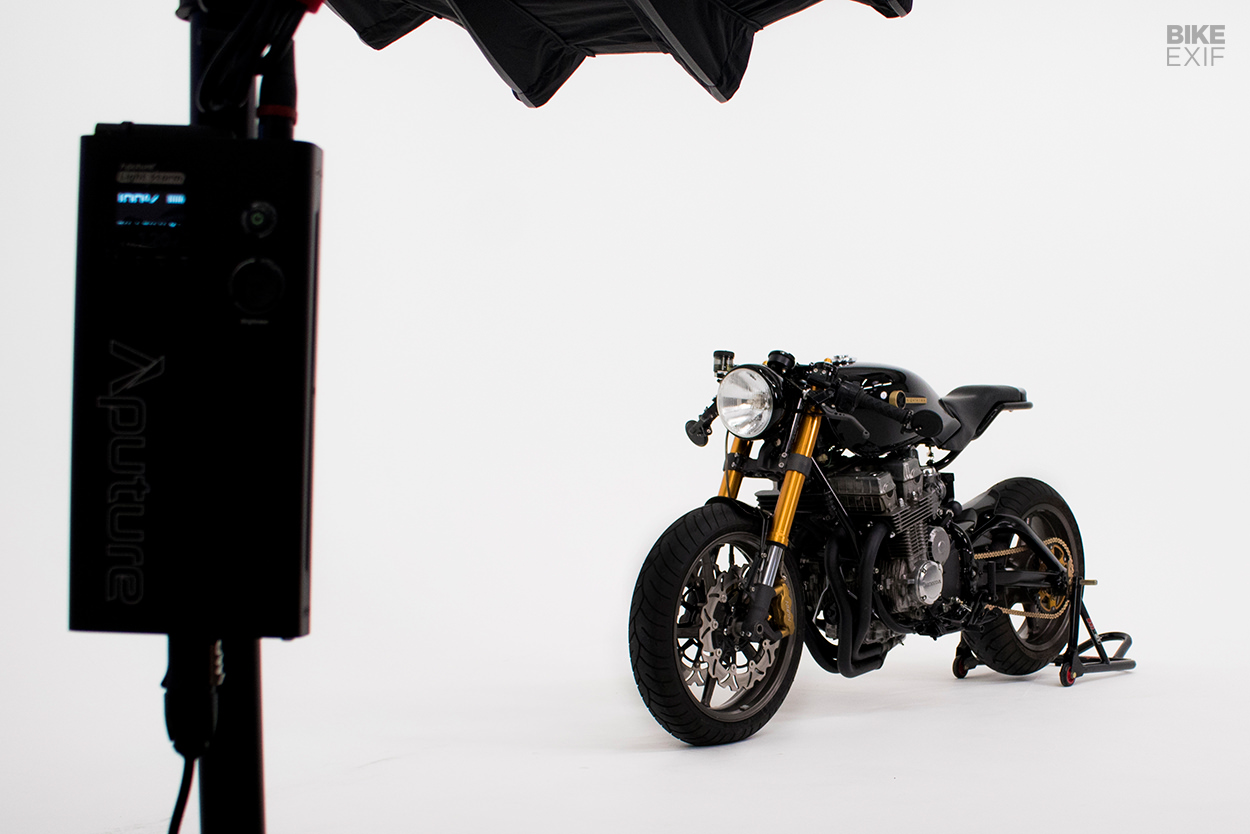