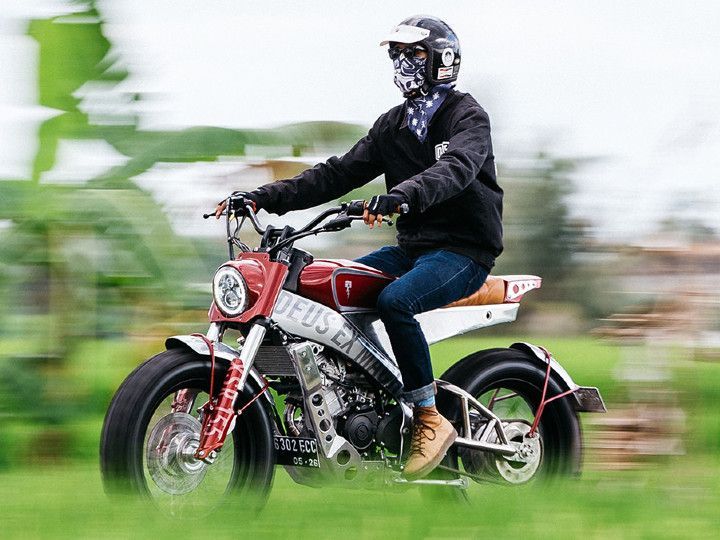 Yamaha’s XSR line of neo-retro motorcycles have been loved the world over, and while Indian enthusiasts have had to settle for the eccentric FZ-X, ASEAN markets have relished its more powerful sibling – the Yamaha XSR 155. Deus, a Bali-based customization workshop was the last participant in Yamaha’s ninth Yard Built program, and they turned the neo-retro roadster into the go-anywhere jammer you’d want in your garage.

Deus chose to go for an industrial look for its construction, removing all bulky items like side panels, fenders and even passenger footrests while displaying the Deltabox frame. The original fuel tank was replaced with a smaller, more compact unit, followed by a cantilevered folding seat. Under the saddle is a new LED tail light integrated into the subframe. With the side panels gone, Deus opted to cover the subframe with perforated aluminum foil that gives a glimpse of what lies below.

Now, with the beefy rubber and for sheer visual appeal, the box-style swingarm had to go. Deus handcrafted a tube-type swingarm that was in sync with the industrial design of the bike. This is not the only part that was built the old fashioned way. Everything from the fork guards, skid plate, radiator side covers and even the fenders has been handcrafted, which Indonesia is known for.

Of course, the industrial look won’t reflect without this paint job. Deus removed the anodized finish from the fork and gave most of the bike’s components an aluminum finish for rugged appeal. Interestingly, the custom shop managed to tidy up the wiring better than Yamaha, despite minimal body coating. As part of the Yard Build program, Deus was allowed to handle everything except the legendary Deltabox frame and the 155cc single cylinder engine it shares with the Yamaha YZF-R15.

The Yamaha XSR 155 from Deus is surely a garage dream for most of us, however, the Aka-Tombo will not be on sale and will be part of the store’s Hall of Enthusiasm, as a model of ‘exposure.