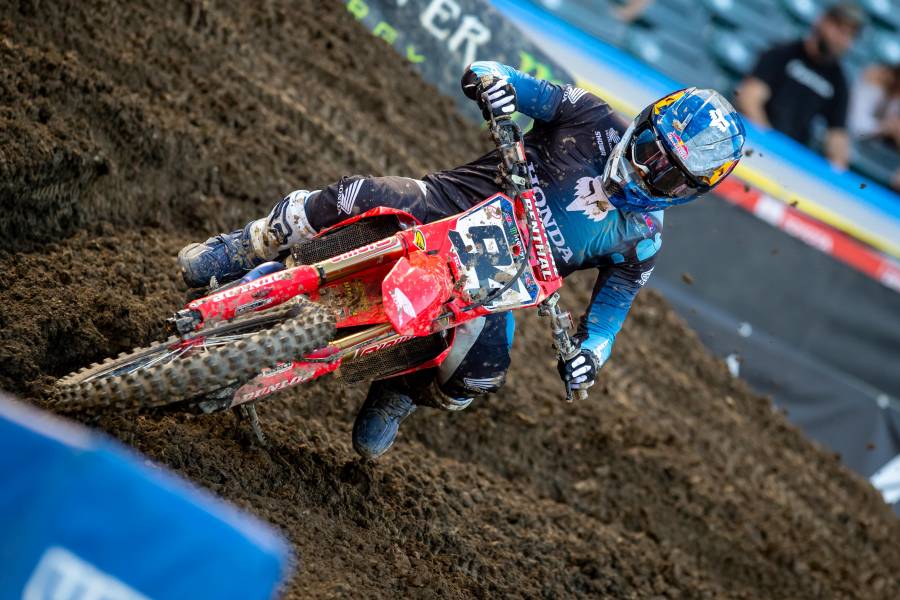 Round six of the AMA Supercross series at Angel Stadium in Anaheim was pretty forgettable for the Honda HRC team, as the 450SX main event saw Chase Sexton finish seventh and teammate Ken Roczen 11and. Sexton finished the first lap in eighth and started moving forward, moving into sixth at the halfway mark. He lost the place with seven laps to go and finished seventh at the finish. Meanwhile, Roczen was pushed back into turn one and, after getting tangled with a Tuffblox cushion, he resumed the race in last place. The German fought his way through the peloton on the slippery track but was only able to climb to 11th place at the finish. Sexton now sits third in the title chase, 18 points behind leader Eli Tomac, while Roczen is eighth.

Hunter Lawrence got off to a second-place start in the 250SX West main event and battled with Christian Craig for the lead before suffering a serious crash in the whoops section on lap 7. The Aussie struggled to get up and was eventually escorted off the track to be assessed at the Alpinestars medical unit. Lawrence is third in the title hunt, with a five-week break and four rounds remaining in the regional championship

In the pits, Honda celebrated Bailey Cole’s recent win in the King of the Hammers UTV Stock NA class, with a side-by-side presentation of the winning Honda Off-Road Factory Racing Talon 1000R.

The Redondo Beach Police Department displayed its specially equipped Honda Africa Twins in the pits and drove them onto the field during the opening ceremonies at Anaheim 3. Led by Chief Keith Kauffman, the RBPD pioneered the development of the adventure bike patrol unit concept.

Lawrence’s mechanic, Cameron Camera, was unable to work Saturday due to a back injury and was replaced by 250 crew chief Grant Hutcheson.

Sexton and Roczen both took part in the opening ceremonies, the latter joined by his son Griffin wearing a Fox Racing jersey to match his father’s.

In 450SX qualifying, Sexton was the third best rider with a lap of 57.213 inches, despite crashing in the first session. Roczen was 13th at 59.241″. SmarTop/Bullfrog Spas/MCR Honda riders Justin Brayton and Mitchell Oldenburg were 10th and 17th respectively, and SGB Unlimited rider Cade Clason was 22nd.

Friese was impressive in the Anaheim 3 250SX main race, earning a second-place finish—the best finish of his career.

Lawrence’s DNF dropped him one position in the 250SX West title chase to third place and put him 29 points behind points leader Christian Craig. In the 450SX class, Sexton also dropped a position to third, 18 points behind Eli Tomac. Roczen is eighth in the same category.

AMA Supercross will now leave the West Region and head to Minneapolis for the start of the East Regional 250SX Championship. Jett Lawrence of the Honda HRC team will start his campaign in this category aboard his CRF250R.

How did we end up with 17-inch wheels for sportbikes?