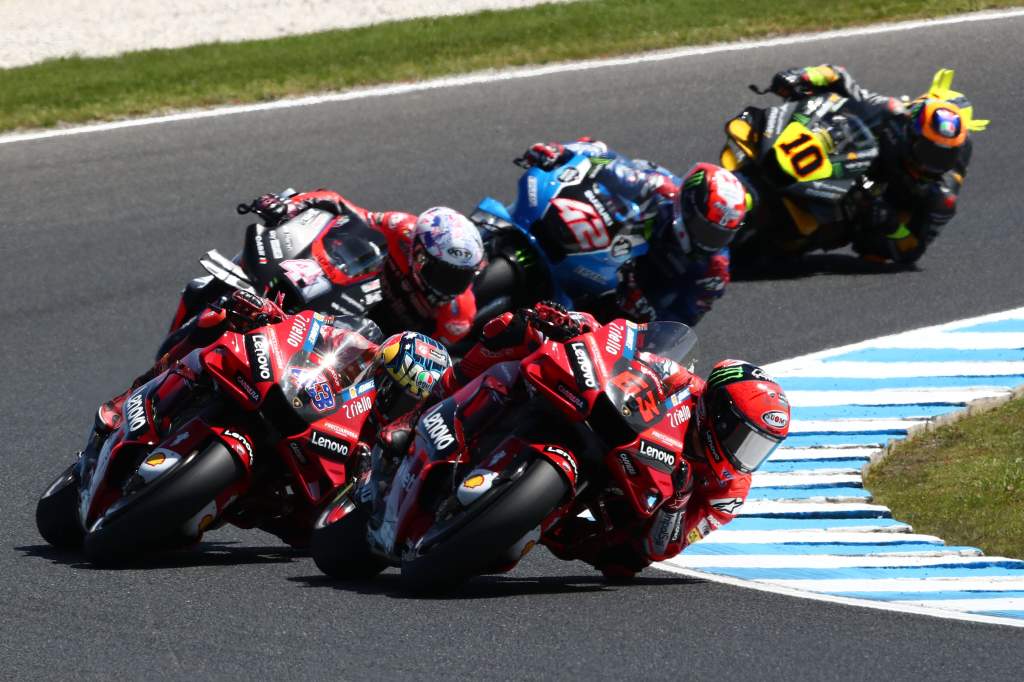 Ducati’s current MotoGP supremacy and range of riders capable of being fast on its bike is “ridiculous” and “frustrating”, according to Aprilia’s Aleix Espargaro.

The 2022 MotoGP grid of 24 bikes includes five current-spec Ducati Desmosedici GP22s and three-year-old GP21s. They have accounted for 14 of 18 poles and 11 of 18 wins so far this season.

Ducati won the constructors’ title in Aragon with a phenomenal five races to go, and is in prime position to make it a MotoGP triple crown with team and rider titles.

It was a big step towards that triple crown at the Australian Grand Prix at Phillip Island, because while Suzuki’s Alex Rins and Honda’s Marc Marquez kept him out of the top two, leading Ducati rider Francesco Bagnaia in third was followed by five more Desmosedicis.

The only Ducati riders missing from the top eight were Jack Miller, who was on course to finish there before being wiped out by Alex Marquez, and Fabio Di Giannantonio – the Italian rookie struggling for pace for much of the season but still having succeeded in securing his first pole at Mugello in May.

Espargaro, who finished ninth in the Phillip Island race, said after the Grand Prix that suggestions earlier in the season that his Aprilia RS-GP was the best MotoGP bike on the Ducati were far from accurate.

“It’s funny because not so long ago, three or four months ago, everyone was saying that Aprilia was a new Ferrari, and I knew the bike that I have – I know that it’s a good bike, I know we’ve improved the bike a lot, but it’s not at all on the level of the best bike on the grid,” he said.

“It was never like that. But they made a lot of mistakes at the start of the year.

“Today the Ducatis result is… I don’t want to use the word, but it’s ridiculous.

“You see all the riders – no matter who rides this bike, they’re in the top, top six. It’s frustrating.”

HOW MUCH HELP HAS BAGNAIA RECEIVED? 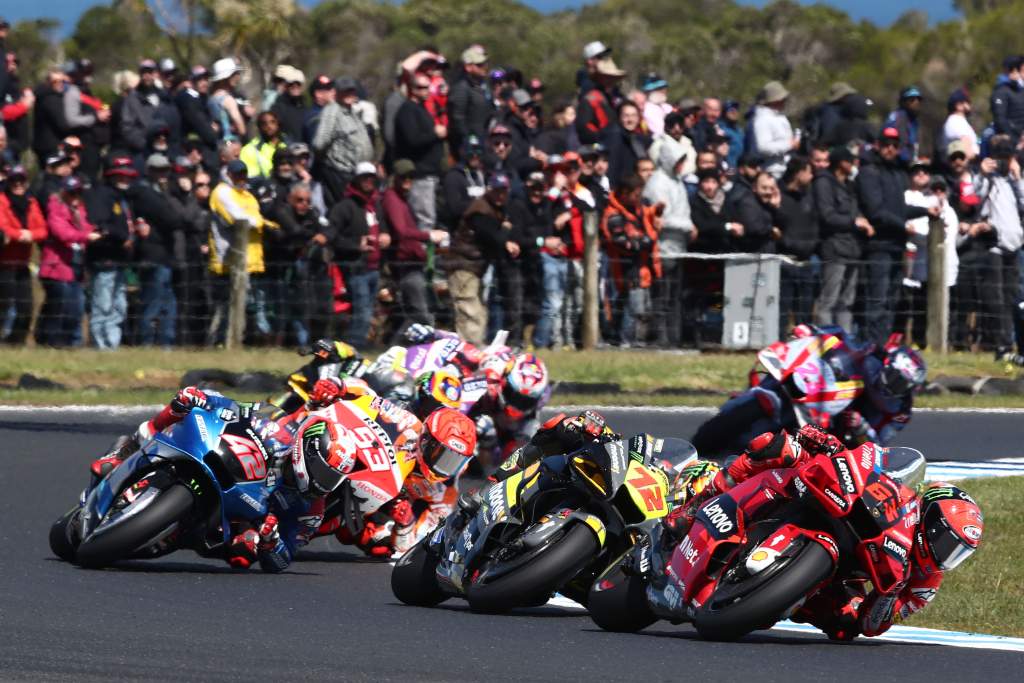 A third place took Bagnaia to 14 points ahead of Fabio Quartararo, 27 ahead of Espargaro and 42 ahead of Enea Bastianini (Gresini Ducati).

Bagnaia finished as the leading Ducati rider, having seen two of his Ducati stable mates racing behind him at various points in the race.

Ducati publicly maintains that it operates under a ‘no team orders, but minimal risk in battle’ policy, although it has been suggested that its riders have been instructed to prioritize Bagnaia s’ they do not fight for victory.

But factory team-mate Miller ‘threw him inside’ Bagnaia twice at Turn 10 early on – with Bagnaia managing to counter both moves – and probably would have tried to come back later if he had any the opportunity and didn’t get him annihilated by Marquez.

Bagnaia’s teammate, Valentino Rossi protege Marco Bezzecchi, was the other Ducati rider to follow Bagnaia at the Australian GP, ​​and many wondered if he deliberately delayed a move.

“He was one of the fastest drivers in FP1, I think he could have done even better but maybe he didn’t want to overtake Pecco, not take too many risks, because I think he could do something more,” Bezzecchi said. VR46 teammate Luca Marini said after the race. 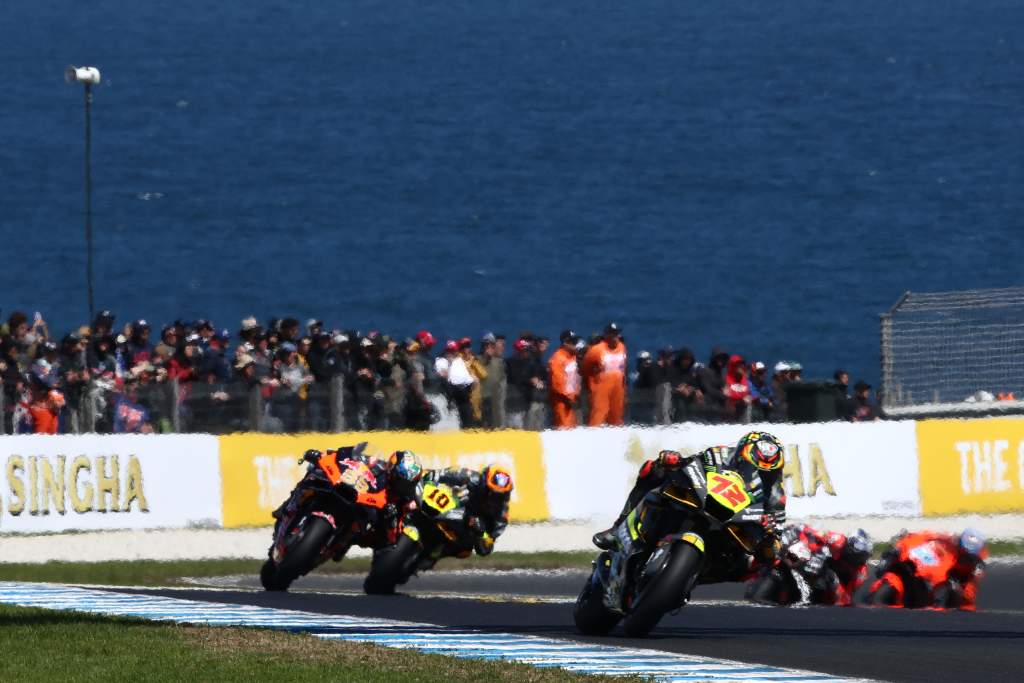 Bezzecchi himself both corroborated and refuted this view, acknowledging that he wouldn’t have taken a big risk but also insisting that he was “not fast enough” to overtake Bagnaia, qu he was “already pushing a lot to stay close” and finally finished the race with “destroyed” tires.

“I tried to overtake, but the only point where I could safely overtake was the first corner – and in the last corner I lost too much,” Bezzecchi said.

“Trying to overtake [the hairpin-like right-hander] turn 10 would have been stupid, for him and also for me. Because it was a fantastic race, and I didn’t want to finish it in the gravel or outside the top five.

Home Loan and Savings Account Options to Consider for October