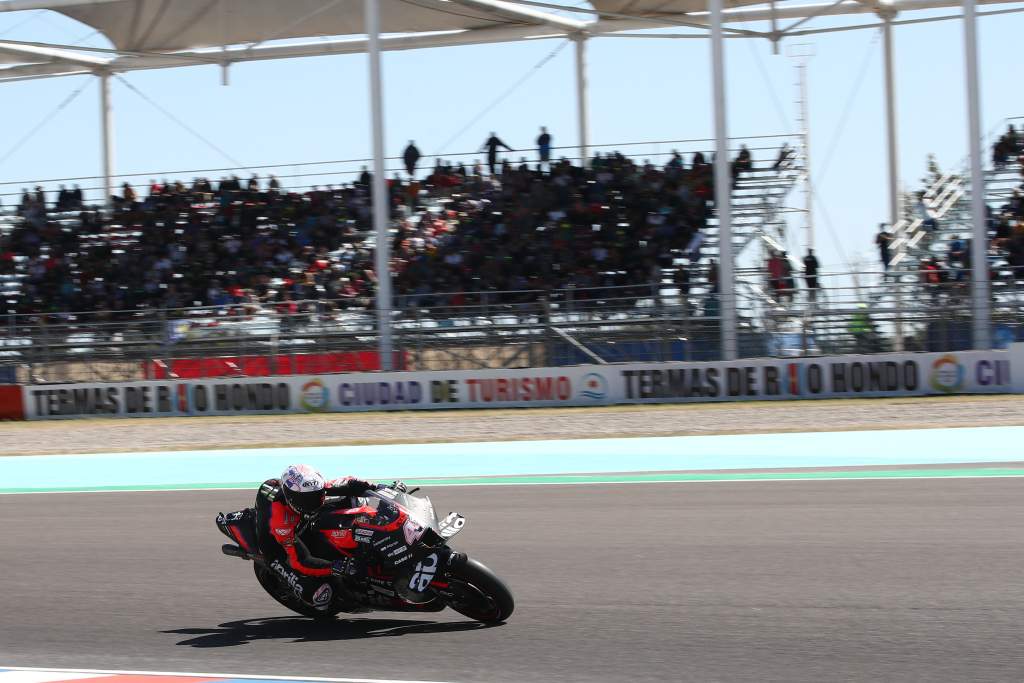 Espargaro gives Aprilia its first pole of the MotoGP era

The Noale firm’s first MotoGP-era pole – the previous one being courtesy of Jeremy McWilliams in his 500cc days – was also the third of Espargaro’s premier class career. His other two came on two different bikes – the Forward Yamaha in Assen in 2014 and the Suzuki in Barcelona in 2015.

After dominating the pre-qualifying FP2, Espargaro immediately reclaimed his lead at the start of the pole vault shootout, taking a three-tenths lead over the chasing pack with a 1m38.108s.

That seemed enough on its own for pole, but Jorge Martin unleashed a phenomenal final sector to take a quarter-second lead over the Aprilia man, forcing him to attack again.

However, Espargaro put in another strong lap with his final effort, ending up with a time of 1m37.688s that beat rider Pramac Ducati Martin by a tenth and a half.

VR46 Ducati rider Luca Marini, who had narrowly slipped into a direct Q2 spot in FP2, followed Martin on the Spaniard’s quickest lap to complete the front row behind him.

Pol Espargaro (Honda) will line up directly behind his brother Aleix in fourth, although he had to struggle during Q1 – having risked ruining his day with a crash at the start of FP2.

Maverick Vinales had finished an Aprilia 1-2 behind elder Espargaro in FP2 but had to settle for fifth in qualifying, just ahead of former Yamaha teammate Fabio Quartararo.

The defending champion was infuriated when factory Ducati rider Jack Miller got in his way on a crucial late push lap, with Miller moving up to 11th – after crashing on his first attempted Q2 – and currently under investigation.

The Suzukis of Alex Rins and Joan Mir will top the third row – despite one of Mir’s bikes refusing to start at the start of Q2 – joined by Pramac Ducati’s Johann Zarco.

Takaaki Nakagami (LCR Honda) was expected to miss the weekend completely with a positive COVID-19 diagnosis, but, after testing negative just in time, fought through the first quarter and finished 10th, ahead of Miller and KTM’s Brad Binder – who had one of his KTM RC16’s expire in a cloud of smoke during FP2.

This RC16 has expired! 💨@BradBinder_41 leaves his KTM by the pit lane entrance and returns to the pits! 💥#ArgentinaGP 🇦🇷 pic.twitter.com/0G4PVNqLeb

Bagnaia, who was frustrated with riders trying to keep up with him at the end of an FP2 session where his last attempt was thwarted by fellow Valentino Rossi protege Marco Bezzecchi overtaking him at Turn 1 and crashing immediately, n couldn’t do anything in his first race. in Q1.

Struggling to keep his Desmosedici under control over the bumps, he eventually improved considerably – but not enough – on his second run.

Factory Yamaha rider Franco Morbidelli made it an all-Italian line behind Bastianini and Bagnaia, with KTM’s Miguel Oliveira – the winner last time out at Mandalika – only managing to finish 16th, 0.006s ahead of the Bezzecchi rookie.

Honda tester Stefan Bradl, competing in place of Marc Marquez this weekend, was nine-tenths off the pace in Q1 and will complete the grid.