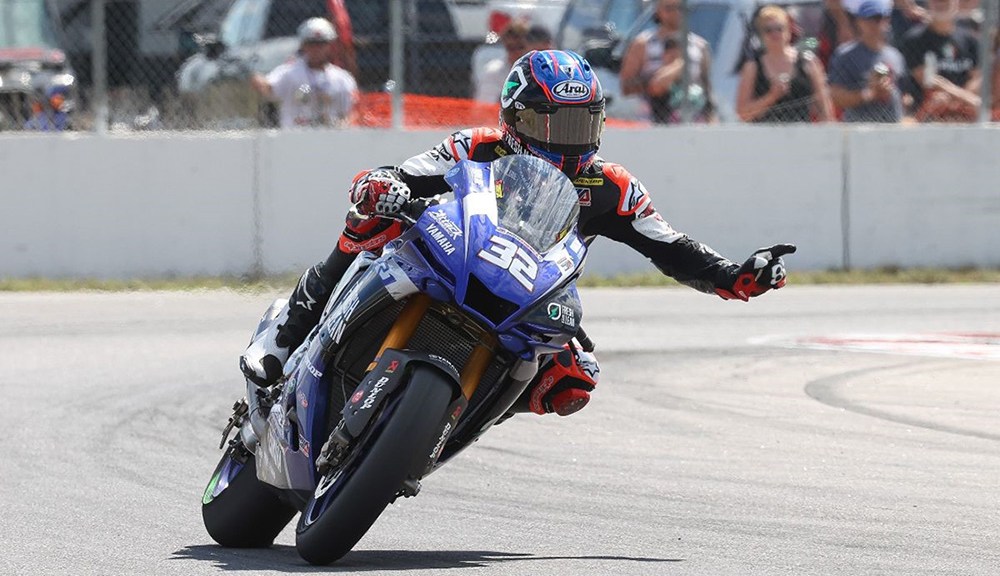 The victory was like most of Gagné’s other victories. Domineering. He started from pole position and never took the lead, securing a 5.2 second victory over Mathew Scholtz of Westby Racing, who had his hands full for the duration with Loris Baz of Warhorse HSBK Racing Ducati New York. After 18 laps, Scholtz was just over a second ahead of the Frenchman, with Baz making a mistake on the last lap that prevented him from running for the South African.

Gagné’s winning streak dates back to race two when the season opener at Road Atlanta in May, the Californian suffered an engine failure in race one but hasn’t lost since.

MotoAmerica assistance course: Kelly wins and gets closer to the Supersport title

“Not really,” said Gagné when asked if he thinks that kind of winning streak is possible in the preseason. “It’s not what I thought. This class is so stacked up and there are a lot of great teams. We just got lucky. We started the year very comfortably and had a bike that worked really well everywhere. We always have a bike that works really well everywhere. I am so happy. Everything is going very well with the team. I have a great team, a great team leader, everyone. With Corndog (Jon Cornwell, his team leader), with Richard (Stanboli, the team owner) with Darin (Marshall, his electronics) at home, with Mike (Canfield) and Walker (Jemison) on the bike . We are all well placed. We all have fun riding motorcycles. We try to take advantage of it. We’ve had a lot of good days throughout this year, but we know anything can happen. These guys are coming. They are getting closer and closer. But I’m happy with this weekend. Thursday and Friday we were still fast, but it wasn’t the bike I had been riding all year. Yesterday we kind of changed some things and it looked like my bike again. I was just lucky I got off to a good start. I was spinning the rear tire to the first corner. It was weird having pole position on the inside, so you go into that inside corner on the dirty stuff and that thing just annoys me. I managed to do a few good laps there and just kept an eye on my pit board. Hats off to the Yamaha Fresh N ‘Lean Attack team because it’s awesome. I try not to think of a streak or how many wins we got or whatever. This weekend is behind us. Now we have to go to Pittsburgh and get down to business because it’s going to get harder and harder. “

Scholtz wrapped up a successful weekend when AMA Superbike returned to the Brainerd International Raceway with his third and second places in Minnesota.

“It’s always nice to be on the podium, especially after struggling around three and four, four and five,” said Scholtz. “At Laguna Seca it was nice to be on the podium there. Then come and get two really good podiums, fight with the guys and show that I have the pace to come back here, that was great. I just need to try and work the first two laps because I’m just struggling. I’m a little bad in the first four or five laps. I have no feeling. I slide and slide everywhere. I have the impression that the front is pushing. I think Bobby (Fong) was following Jake (Gagne). He walked away in a big way. Cameron (Beaubier) passed me. I was having a hard time, then (Loris) Baz passed me and I was like, “This guy started 10th and he’s passing me. I have to do something. So I started pushing a little harder than I should have. I took a chance or two, but then settled into a decent pace from there. I could see when I was fighting Baz like he said there were a few corners where I would catch him a lot and there were a few corners where he was pulling me a lot too. So we were going back and forth a lot. Then one of the laps, coming out of turn six, we had a pretty decent ride and got to a two-bike length of Loris on the carousel turn. He went a little deeper than usual so I thought it was my chance and dived up there. In turn three, maybe turn six, on the 12th, all the turns where you normally think you are passing someone, Loris was an absolute animal that braked late. He pulled four or five bikes each time. So I kind of knew I had to find something somewhere else. Just happy to be back here in second place, where we should be. I think in the last two laps I was at the same pace as Jake. I just need to figure out those first two laps and work on those outright two, three, four laps of pushing.

Baz bounced back from a bad day at the office on Saturday in the first race, the Frenchman crashed in the second lap of the race and destroyed his Ducati Panigale V4 R. Baz had to go on the spare motorcycle for Sunday and he went from 10e on the grid to finish third.

“Yeah, not that bad, especially after yesterday’s disaster,” Baz said. “I am still very angry with what happened yesterday. It was completely unprofessional. I’m just glad we’re alive with Jake (Gagne) because it was really scary the first few laps. Then, like you said, you try to put it behind. You get on your emergency bike. We had a problem warming up. Some sensors weren’t working, so we couldn’t do everything we wanted. So I kept my fingers crossed that everything worked for the race. The mechanics of the Warhorse HSBK Racing team have done an incredible job. Like you say, the frame was cut in half, the swingarm broke, everything was dead. So they had to assemble another bike. I had a pretty good start. I wanted to try to get to P2 as soon as possible. As I expected, when I was P2, Jake was already far away. Then I just tried to save my tires a bit. We had a fight with Mathew (Scholtz) which was really cool. I was behind him. He was stronger in a few places, as Mathew said, then I was stronger in the whole second section. I think two laps from the end I found the spot where I wanted to try something on the last lap but entering the carousel I had a neutral, and if you go straight here you have a five second penalty so I did everything I could just to stay on the track. I lost a lot but hats off to them. They did an incredible job. I just want to thank my team a lot and the guys from Ducati, Paolo Ciabatti who came this weekend. We’ve done a really good job of making the V4 perform better and better on these kind of really bumpy tracks. We were much stronger than we were in the test. So we go back to the next one. Try to improve again.

The second HONOS Superbike race of the weekend at @BIRrace picked up where the first race left off with everyone looking for the points leader on a track where courageous moves are the only way to get to the front. Check out the highlights of it.https: //t.co/KesImHrvTT

Next was M4 ECSTAR Suzuki’s Bobby Fong, the Californian looking to repeat Saturday’s second place until an off-road excursion pushed him down. He fought back, however, passing teammate Cameron Petersen in the final laps for fourth place.

Petersen was fifth, about three seconds behind Fresh N ‘Lean Attack Performance Yamaha substitute rider JD Beach. Beach was faster in Sunday’s race than he was in Saturday’s, as he improved with each session and each race as his comfort level increased.

Scheibe Racing BMW’s Hector Barbera finished behind Beach, the Spaniard suffering from the start of an off-road excursion.

As it was on Saturday, Altus Motorsports’ Jake Lewis was the top rider in the Superbike Cup, finishing eighth on his 1000 series Suzuki GSX-R1000.

Bradley Ward of FLY Racing / ADR Motorsports completed his weekend back from injury to finish ninth with Corey Alexander of HONOS HVMC Racing completing the top 10.

Do MotoGP contracts mean anything?