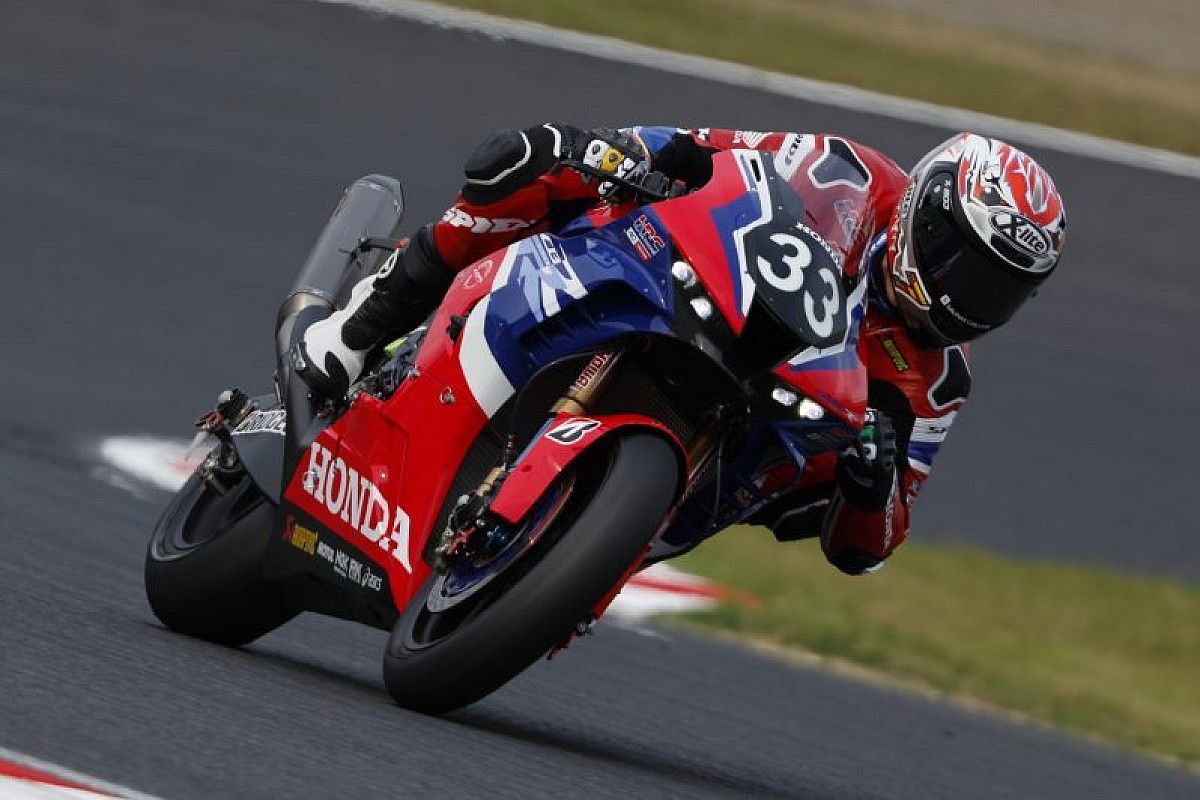 Three-time race winner Takumi Takahashi was a minute and 40 seconds ahead of Jonathan Rea in the #10 Kawasaki as the clock hit the four-hour mark, with Nicola Canepa recovering from a slow start to place the YART Yamaha on a provisional position on the podium. .

But the first half of the race was not easy for the #33 Honda factory team which took pole position, with plenty of drama in the opening hours.

At the start, Takahashi lost one position to Josh Hook’s FCC TSR Honda, who was able to sprint to his bike faster than any of his immediate rivals to take the lead from fourth. And to make matters worse, Kawasaki’s Leon Haslam also found a way past Takahashi on the 130R descent on the first lap, dropping the Honda rider to third.

But Takahashi was quick to regain the lost ground, immediately passing Haslam’s Kawasaki back into Turn 1 at the start of lap 2 before making a move on Hook before the 130R.

The timing of Takahashi’s move proved crucial as the safety car was deployed seconds later for an accident involving two Honda satellite bikes earlier in the lap at Spoon Curve.

It was Kosuke Sakumoto who started the incident, losing the front of his Honda Dream bike on the long left-hander and taking an innocent Naomichi Uramoto on the #73 SDG Honda with him into the gravel.

When the safety car entered the pits over 20 minutes later, Takahashi again struggled to hold on to the lead, with a charging Gregg Black on the Yoshimura Suzuki quickly passing Haslam and Hook before passing Takahashi when he ran slightly wide at Spoon Curve.

It was then Haslam’s turn to grab the lead, with the Kawasaki rider pulling off a successful move on Hook entering the esses on the next lap.

But once again the advantage of the factory Honda bike was evident and Takahashi quickly dispatched Black in 130R before sprinting past Haslam on the main straight to restore the status quo.

Once back in front, the 32-year-old was able to pull away from his rivals, building an eight-second advantage over Haslam before handing the bike over to Tetsuta Nagashima.

The former Moto2 rider continued Takahashi’s good work and extended the advantage to 22 seconds before pitting at the start of the third hour for Iker Lecuona’s first stint at Suzuka.

Kawasaki’s Rea boxed alongside Takakashi to hand over the #10 ZX-10RR to Alex Lowes, but the three-time race winner struggled out of the pits for the next few laps, losing more than 30 seconds behind. a quick Lecuona.

This would eventually have major consequences for the race as a pair of safety cars were sent to the track shortly after when the #51 IW NAC Yamaha caught fire after Hinata Nakajima crashed at the entrance to the second Degner.

The gap between the two leading drivers meant Lowes took the second safety car, losing more than a minute to Lecuona’s Honda when action resumed.

In the fourth hour, Kawasaki was able to keep pace with the Honda for the first time with Rea driving the ZX-10RR, but the Northern Irishman fell to the ground at the first chicane as he navigated the traffic.

Rea was able to get back on his bike and resume the race, but the 28 seconds he lost allowed Takahashi to take the lead and extend his advantage to over 100 seconds.

Far behind the leading duo, the YART team is in a clear third place after an impressive comeback from Canepa, who failed to start his Yamaha at the start and fell to 22nd place.

The Italian moved up to 17th when the first safety car was deployed at the end of lap 2 before continuing his progress when the race resumed, snatching third place where he had qualified after only 37 minutes of racing .

However, the YART team’s stints were much shorter than their rivals and they lost one spot for the time being after making an early fourth stop.

This temporarily raised the FIM Endurance World Championship point from fourth to third for Team Yoshimura Suzuki, who had qualified 22nd after Sylvain Guintoli was unable to take part in a first session. qualifying in the dry due to a hand injury.

With Guintoli back in the UK to recover, Black and Kazuki Watanabe compete as a duo, with the former placing fourth in the first two rounds and even briefly taking the lead after SC’s first half, before dropping three positions.

Fifth place in the race was long held by the FCC TSR Honda team, but a long pit stop where they struggled to change the rear brake knocked them out of the top 10, promoting Takuma Kunimune into the # 104 Toho Honda to fifth place.

BMW was riding comfortably in the top 10 until it stopped on track near the end of the fourth hour, forcing Ilya Mikhalchik to bring the bike back to the pits.