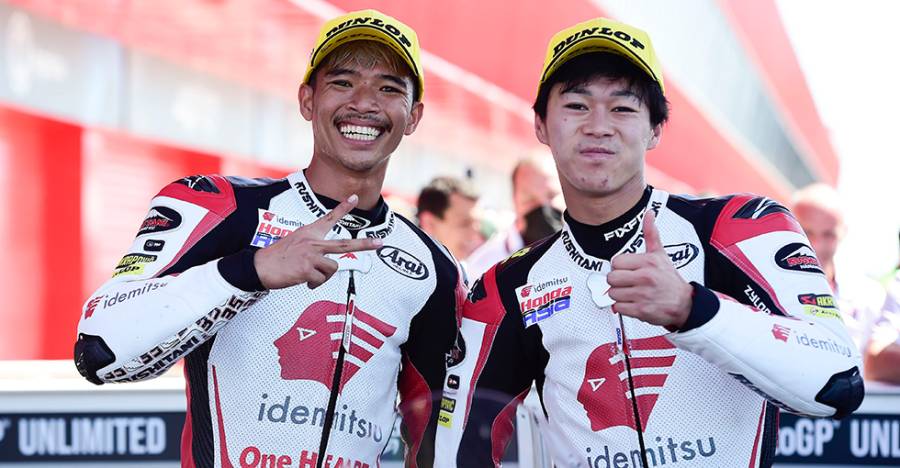 The teammates were both in superb form around the fast flowing circuit, Chantra chasing winner Celestino Vietti (Mooney VR46 Racing Team Kalex) for much of the race, while Ogura had a high tension battle for the third place with Aron Canet (Flexbox HP40 Kalex).

Their second and third places place IDEMITSU Honda Team Asia at the top of the prestigious Moto2 Teams World Championship.

Two weeks ago, Chantra made history by becoming the first Thai to win a motorcycle Grand Prix, in Mandalika, Indonesia, and this afternoon he was just 1.538 seconds away from scoring victories consecutive. The 23-year-old led the race at half distance but eventually had to settle for second place.

The result means Chantra has finished on the podium in every race he has started this year, as he missed the season-opening race in Qatar after a heavy crash earlier in the weekend. And that also puts him third in the Moto2 Riders’ World Championship, after three out of 21 races.

One stage into the 23-lap race, it looked like Ogura might have the pace to catch Chantra and Vietti, but instead the 21-year-old Japanese star from Tokyo settled into a thrilling duel for last place. on the podium with 22 years. The Spaniard Canet. The pair were just yards apart on the closing stages, with Ogura riding superbly, especially on the brakes, to stay third.

On the final lap, Canet passed twice, but both times Ogura counter-attacked, reclaiming third place for the final time with a brilliant move into the penultimate corner. It was his first podium of 2022 and his second in the Moto2 class since his first, at the Austrian Grand Prix last August. Ogura now sits fourth in the championship.

This afternoon’s double podium was a huge boost for Honda’s Asian rider development program, which saw Chantra advance to the Honda-backed Asia Talent Cup and Ogura to Grand Prix racing. with his Asia Talent Team.

Canet’s fourth place was his first podium finish of 2022, which still keeps him second overall in points. He finished the race less than a second ahead of Jake Dixon (India GASGAS Aspar Team), who won by taking fifth place from Tony Arbolino (ELF Marc VDS Racing Team Kalex).