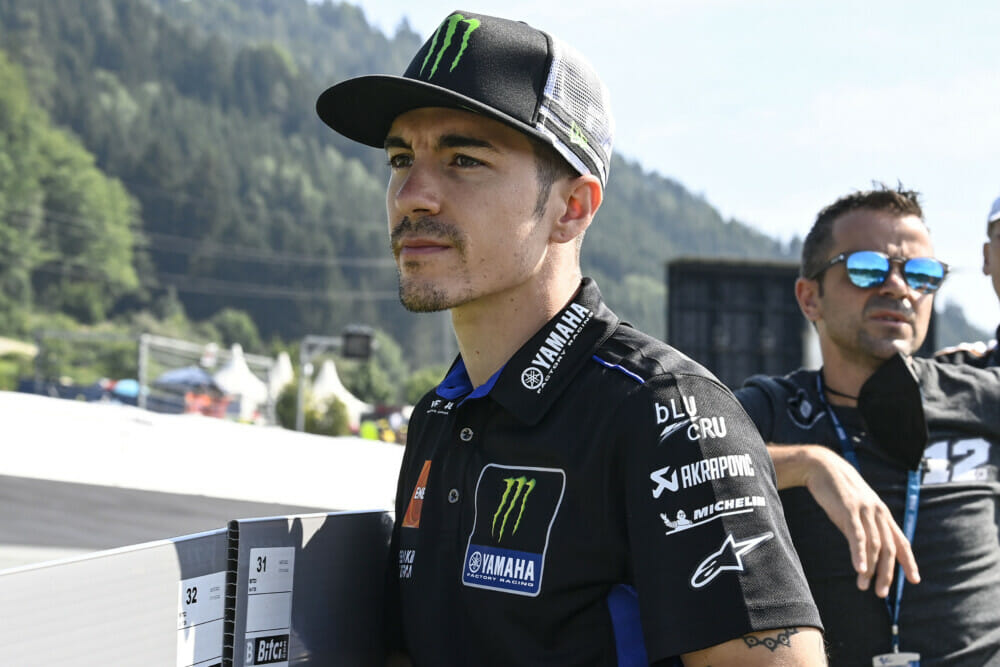 In the Paddock column – Cycle News

Cycle news In the paddock

“I am a warrior.” It was the most poignant remark of the punished (one could say “creeping”) apology from Maverick Vinales to Yamaha, banned on the sidelines of the Austrian GP, ​​after his controversial attempt to blow up his motorcycle the previous week.

He splurged on a humble pie, apologizing for the way his emotions got the better of him, on a rough afternoon. He had started strong in the race, only to be signaled after just three laps. The restart was disaster after disaster. Stalling on the grid before the warm-up lap meant a start back from the grid. He had regained a few places only to suffer a long lap penalty for exceeding the limits of the track: very easy to do at the Red Bull Ring. Back in last place, his frustration boiled over.

His humble apologies, which came as they did after the toughest season so far, were not enough to save his job in the squad for which he has won eight wins in four years and a little. Finishing the Styrian GP in the pits ended his last race on a factory Yamaha.

Another twist in an extraordinary saga.

Extraordinary due to the extremely variable results of this former Moto3 champion and multiple GP winner this year – he finished first in Doha, ran from pole to second in Assen, but came last in Germany and Styria.

Extraordinary due to his abandonment halfway through his two-year Yamaha contract. Rather than go through with it, he decided to bail out at the end of this year.

Extraordinary because the longtime ally and team leader Esteban Garcia (the choice of Vinales, after having worked with him in Moto3) had already paid the price, dropped unceremoniously at the start of the season.

And extraordinary because he could hardly expect his intentionally destructive overdrive and “emotional storm” to go unnoticed, with all the surveillance on board and on screen.

There is a precedent. In 1993, John Kocinski was sacked from the Lucky Strike Suzuki 250 team, accused of deliberately trashing the motorcycle during a slowdown lap in Assen. This immediately ended an increasingly resentful relationship.

But it was different. The former 250 champion Kocinski has not confessed or apologized. He continued to repeat these denials. A tweet following the suspension of Vinales (apparently from a fan rather than the man) explained that the bike had stopped on the slowdown lap because a sprocket failed and the chain fell off. He had parked it and walked away (He could have, although he didn’t mention it, made it up loudly in the process. Or it could have happened spontaneously.)

I wrote newspaper articles for the team at the time, and I will never forget Kocinski’s sincerity that night when he insisted on me, “I didn’t damage the bike. I never even broke a fuel tank after a bad race. He was so adamant I wanted to believe him, and I still do. But team boss Hervé Poncharal (now IRTA head, Tech3 KTM team boss and accomplished politician) was equally adamant that John had deliberately blown up the bike. There was no on-board electronics to reveal the truth.

To be fair, this Suzuki was a bit… primitive, facing polite opposition, and there was basis for its growing discontent and criticism. But they were badly seated with a prestigious team and factory for which Kevin Schwantz won the 500 title. They were, no doubt, happy to have an excuse to get rid of him.

Likewise Yamaha, currently set for the same success with Quartararo, and hardly appreciating the sulking of the moody Spaniard, highlighted by his petulant performance avoiding their one-two celebrations at Assen. Like Kocinski, Vinales has a story: publicly coming out of his “non-united” Moto3 team in 2012, then also being forced to apologize publicly.

“Moody” in strong language is another way of saying “mental health problems”, a phenomenon far from unknown in the very stressful world of high performance sport, as American Olympic gymnast Simone Biles has shown. and Japanese tennis star Naomi Osaka.

In these cases, and again with aroused sensitivities, they were mostly treated favorably.

Although not universally. There is another point of view: that these people (Vinales included) have a dream job. They should suck it off and shut up. Going after your team or your equipment is simply unforgivable.

There is food for thought here. I think Yamaha was lucky to offer the struggling rider realistic and sympathetic psychological support. The same is true for MotoGP.

The bike has a rev limiter, and it’s not that easy to break it. Shouldn’t we take care of the runners and let the machinery suck it up?

There is another aspect: the collapse of a tennis player or gymnast only affects themselves. It is potentially risky, however, among a group of crazy fellow riders on MotoGP motorcycles.

Maybe Yamaha didn’t really have a choice. Vinales had to leave.

Next year, it will be more Aprilia’s problem.CN

Click here to read the In the Paddock column in the Cycle news Magazine digital edition.