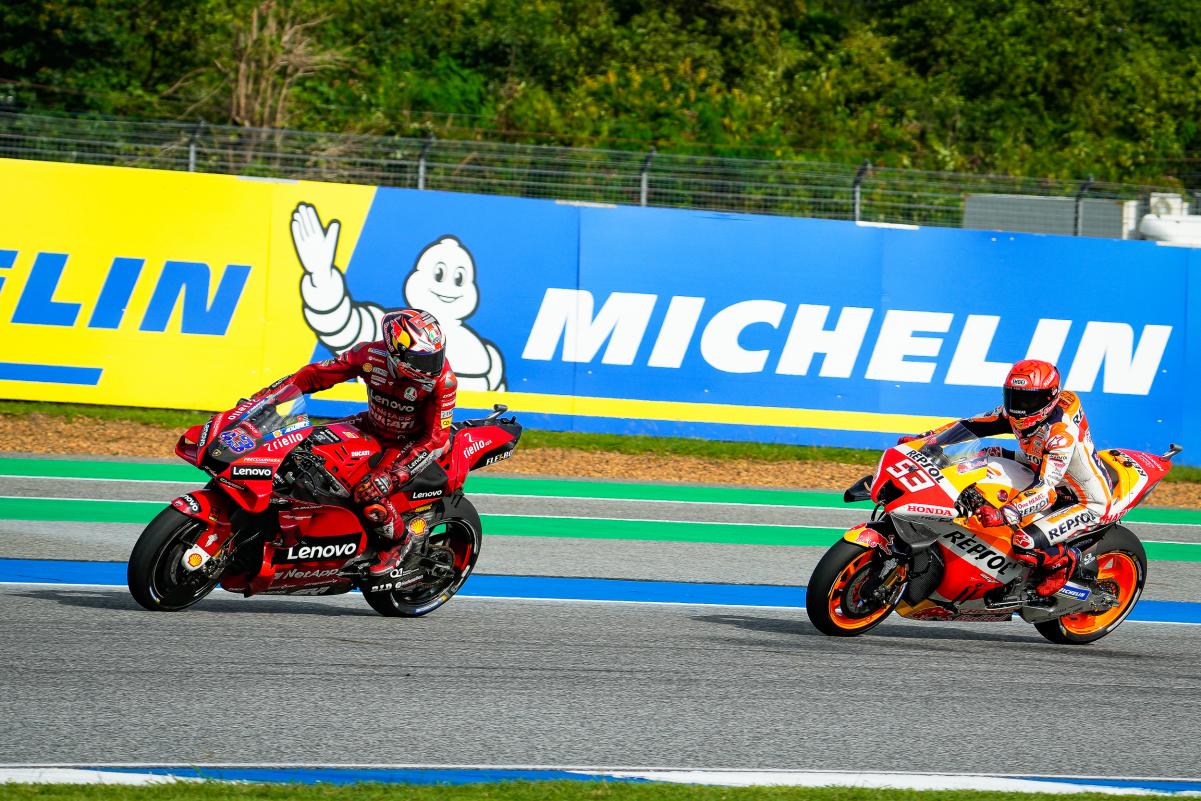 Marc Marquez believes the COVID-19 pandemic helps explain why Japanese manufacturers have been overtaken by Europeans in MotoGP.

However, although the 2007 season was followed by 11 seasons in which Honda or Yamaha won the constructors’ championship, Ducati won this title three times, including concluding it already for 2022.

While this could be partly explained by the prevalence of Desmosedicis on the grid, even though manufacturers’ points are only scored by the best-placed entry, Ducati and fellow Italian brand Aprilia have arguably developed the best bikes of the domain, while KTM is on a recovery now too.

Honda, on the other hand, has become almost completely dependent on Marquez, and Yamaha is becoming a similar case when it comes to Fabio Quartararo, the 2021 champion.

According to Marquez, the logistical challenges caused by the pandemic, which Yamaha raised as a major concern before the late start of the 2020 season, partly explain this.

“The pandemic has affected our sport and once it passed, we saw that Asian factories like Honda, Yamaha or Suzuki were more affected than others,” said the six-time first-class champion in a statement. interview for personal sponsor Estrella. Galicia.

“I think it hurt them even more, especially because in 2020 and 2021 most of the championship was at European circuits.

“Then all the Asian engineers came to live in Europe, but they were no longer at the factory.

“A lot of communication and the level of work have gone down a bit, even if that’s no excuse because in the end you’re in a world championship and you also have to know how to adapt to changes, otherwise you’re overwhelmed, and in this case, perhaps because of protocol and all that goes with it, there were larger forces that they couldn’t adapt to.

Marquez’s comments follow his thinly disguised message to Honda Racing Corporation during August’s Austrian Grand Prix, which he attended basically to keep tabs on the team given he was still not fit to ride after right arm surgery.

Then he argued that their problem was not with the bike itself, but with the “project”, including the communication.

“In this case, Honda worked and at the moment they are still working because normality has returned to their country,” added number 93 in the Estrella Galicia interview.

“Let’s hope that for 2023 they take a big step forward, but I can’t blame them because I see that the effort is maximum, the involvement is maximum too and I feel in them the desire to win again.

“Then there is also the importance of taking every step in the right direction.”

Marquez has become DNF, fourth and fifth in his three races since having fourth surgery on his badly broken arm in the 2020 Spanish Grand Prix and, despite missing much of the 2022 campaign, he is still the most successful Honda rider.

The Australian Grand Prix will then take place at Phillip Island, with practice starting on Thursday 14 October.