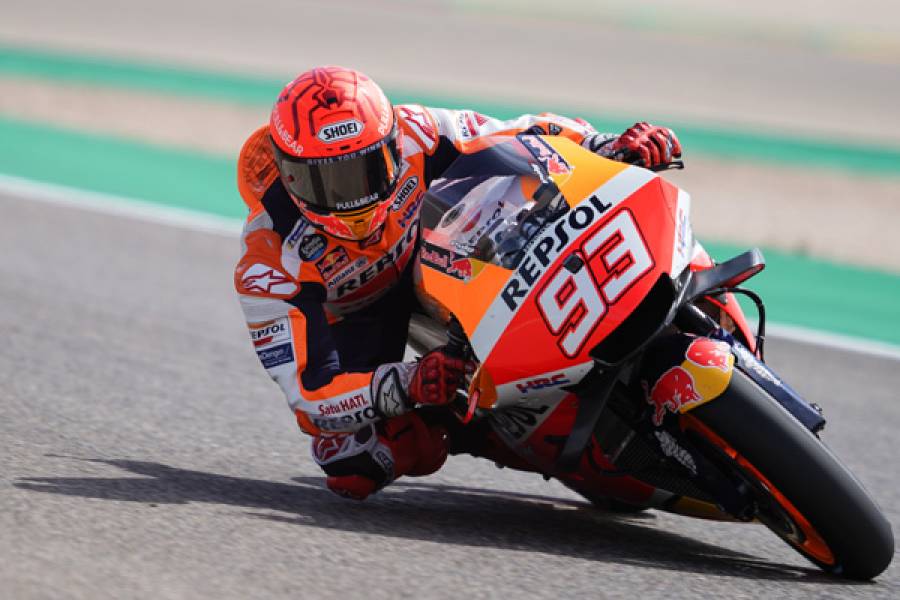 Marquez enjoys the best qualifying since his return

The six-time Honda MotoGP world champion had a superb final lap in this afternoon’s Q2 qualifying session to move up to third place for a front row start, but moments later he was pushed back to fourth place, in less than two hundredths of a second.

Nonetheless, the 28-year-old Spaniard – who has won five of his last seven races here aboard his RC213V – is in good shape for tomorrow’s Aragon Grand Prix, the 13th round of the 18-event World Championship this year. year.

Before qualifying, Marquez dominated the all-important FP4 session, during which the riders evaluate their race settings. This suggests that he has a good chance of getting on the podium for the first time since winning the German GP in June with superb style.

Marquez has a remarkable record on anti-clockwise circuits. He has been undefeated since 2009 at the German Sachsenring, but Aragon is less left-handed than the German stadium, with ten lefts and seven rights, against ten lefts and three rights. This means he places more demands on his right arm and shoulder, which is not yet at full strength following an accident in Jerez in July 2020.

Marquez had two crashes this weekend – at Turn 16 yesterday and at Turn 14 this morning – from which he came out unscathed.

His teammate Pol Espargaro (Repsol Honda Team Honda RC213V) entered the GP of Aragon after his best weekend since joining the Repsol Honda team earlier this year. an excellent fifth.

Espargaro also showed excellent speed here, using Honda’s latest chassis upgrade for the RC213V. Seventh in the first three sessions, just two tenths from the fastest lap, and eighth in FP4, the 30-year-old Spaniard also qualified eighth. He knows he can fight in the top group again, as long as he can get a good start. The first laps on this circuit can always be a bit hectic, so the former Moto2 World Champion knows he has to fight hard from the first corner. Only a few minor mistakes in his fastest qualifying laps kept him from securing a better grid position.

Last year, Takaaki Nakagami (LCR Honda IDEMITSU Honda RC213V) took the start of the Teruel GP in Aragon from pole position. Tomorrow, the 29-year-old Chiba will start from row four on the grid, his best lap just 1.044 seconds from pole and just half a second from second row.

This is an important race for Nakagami as it is his 200th Grand Prix start and he is the first Japanese rider to reach this milestone. He finished sixth closely in FP4, so he too has high hopes for a strong race tomorrow.

Today, Alex Marquez (LCR Honda CASTROL Honda RC213V) was the only Honda RC213V rider not to qualify for Q2. The 25-year-old Spaniard’s day didn’t start well when he slipped in the morning. This incident slightly disrupted his schedule for the day and he missed Q2 by a fraction of a second, so he will start from the fifth row, just behind his teammate.

The MotoGP paddock will be filled quickly after tomorrow’s race as testing for the Grand Prix of San Marino – on the east coast of Italy – begins on Friday morning.

Here’s how the Ducati Panigale stacks up against the competition

Top 10 Digital Motorcycling “Firsts” That Have Been …