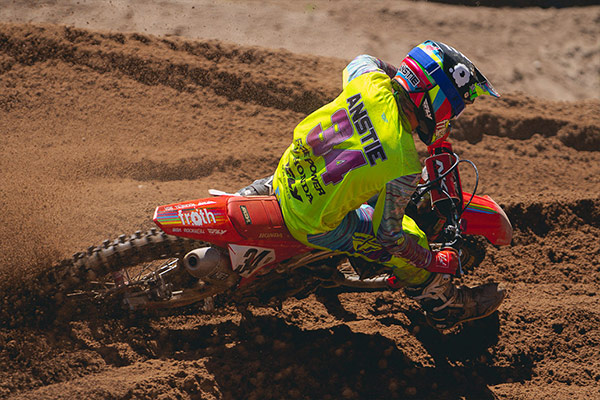 Max Anstie impresses with his Honda firepower at Southwick

Max Anstie was in good form with Firepower Honda in Round 6 of the AMA Pro Motocross Championship with a pair of top five moto finishes.

The friendly Englishman qualified second fastest at the famous Southwick motocross track which set the tone for the day.

Anstie is no stranger to top finishes in motocross, winning the 2017 MXON. Anstie is really happy with his performance considering the limited time he has with the team and on the bike.

“I started racing the Honda five weeks ago, the team called me and gave me an opportunity and after visiting the team’s base in Cairo, Georgia, I was convinced that we could build something special. The team is very passionate and experienced and is lucky to have the support of the American Honda,” explained Anstie.

Max held first place in qualifying for several laps before being relegated to second and team manager Martin Davalos was not surprised.

“We did a two day test, our only test at Southwick with Factory Connection three weeks ago, and developed a competitive bike and Max was fast and above all happy. We all worked together to fine tune the bike after our testing and I was confident we would be competitive. I didn’t expect second place in qualifying, but I expected him to be competitive. It was a great reward for the effort everyone put in. Everyone put in a lot of hours to prepare,” Davalos said.

“The weekend results were positive and with more time we could improve on them. The Honda is competitive from the start, seriously, it’s unreal and we proved that this weekend. Factory Connection created magic and we all agreed that with more time we could refine everything a bit more, that said it was a great result for the team and our sponsors It was nice to race again and ‘being surrounded by fans,’” ​​Anstie said.

Anstie will race another round of the AMA Pro Motocross Championship and isn’t ruling out a return to the MXoN later this year.

“I would love to represent my country and Firepower Honda at the MXON. I have to be picked first, but if I got the call I would, for now I’ll stay focused on the weekend ahead. We have two more days of testing this week and we want to get the same or better results if we can,” Anstie concluded.

As the exit of MotoGP looms, what next for the Binder surprise package?