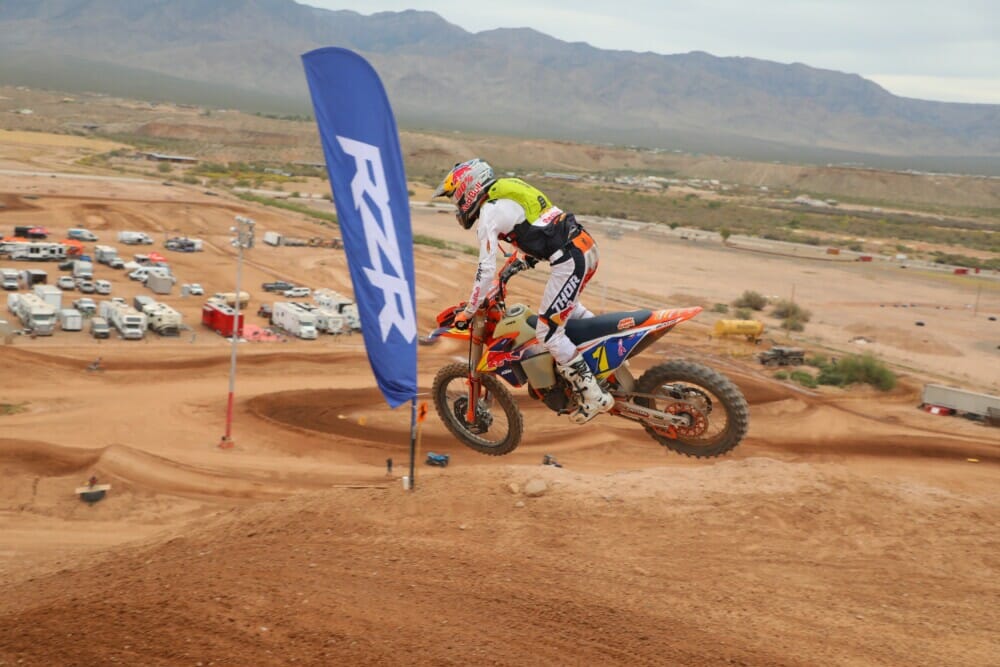 After finishing fourth in the last race, Taylor Robert did what he does best, bounce back and dominate the Rocky Mountain ATV-MC WORCS series presented by Polaris RZR and the Dirt Bike Pro 450 motorcycle event at Mesquite MX at Mesquite, Arizona. Chance Hymas won the Pro 250 race and Evan Stice finished first in Pro-Am.

The event took place on a brand new all-terrain course combined with the Mesquite motocross track. Series officials set up the deep sand course to be more technical, slowing the pace and creating an exciting and challenging race.

In the Pro 450 race, Dante Oliveira (FMF / KTM) took the start, but his teammate Robert dueled him in the cobblestone section and took the lead.

From there, Robert maintained his lead and clinched his fourth win of the season, tying Oliveira’s season winning record.

â€œI had to prove a point after the last race,â€ said Robert. â€œI went there, did what I can do best, did a few passes and did my own race. I kept my gap and then let my fitness show in the final laps. The new track was awesome. It was a lot tighter and it really slowed down the race. It was cool to add variety.

Martinez won his second consecutive podium with his second place. He fell in the second lap, but found a clear trail ahead of him, allowing him to choose his own lines. Although he caught up with Taylor in the end, he settled for second place.

â€œWe definitely picked up speed,â€ said Martinez. “I had a good fight with Taylor at the end, but he didn’t give up so I settled in for the second.”

After taking the hole, Oliveira and Martinez beat it throughout the race, Oliveira eventually finishing third. Third place, combined with Taylor’s victory, sets up a final shootout between KTM teammates.

â€œThese guys just wanted it today,â€ Oliveira said. â€œTaylor got around me on the road on the first lap and a few laps later Cole and I had a great fight and he got around me. I got out of the pits before him, and we fought until he was 48 minutes left and he kept going. It’s all about the championship, so the final race is going to be exciting.

In Pro 250, outdoor motocross rider Chance Hymas unveiled his new Honda factory bike with a victory. This is his third win of the season in four starts. The points leader Tallon Lafountaine (Honda) is second, ahead of the RPM KTM of Mateo Oliveira.

Despite set-up issues on his Honda, Lafountaine used his signature smooth driving style to finish second and strengthen his points lead.

â€œMy bike was set up for a faster track and this Mesquite was a lot tighter and slower,â€ said Lafountaine. â€œI just couldn’t find the flow and that made it difficult. I just kept my pace, saved my energy, stuck to the plan, and overall it was a good day.

Mateo Oliveira struggled to stand during the race and found himself constantly having to charge after the falls. His athleticism shone though, and he finished third.

â€œI loaded the entire two hours because I kept ending up on the floor,â€ Oliveira said.

In Pro-Am, Evan Stice beat Cameron Horner to claim his fifth win of the season. Stice took the lead at the end of the race in his Honda and took the victory.

â€œI followed Cam for a while, passed him and took the win,â€ said Stice, who extended his points lead in the class. “It was definitely good for the championship.”

Horner’s runner-up effort marked his best result of the season for the aspiring rider.

â€œI pulled away from Evan for the first few laps,â€ said Horner. â€œEvan and I found a drain in the sand and off we went. It was a fun battle.

Richards used the large downhill section of the track for the first time in the Pro-Am event and it earned him his sixth podium of the season.

â€œI didn’t touch the big descent yesterday so I positioned myself today and just sent it off,â€ said Richards. “It got a little sketchy towards the end, but I did it anyway.”