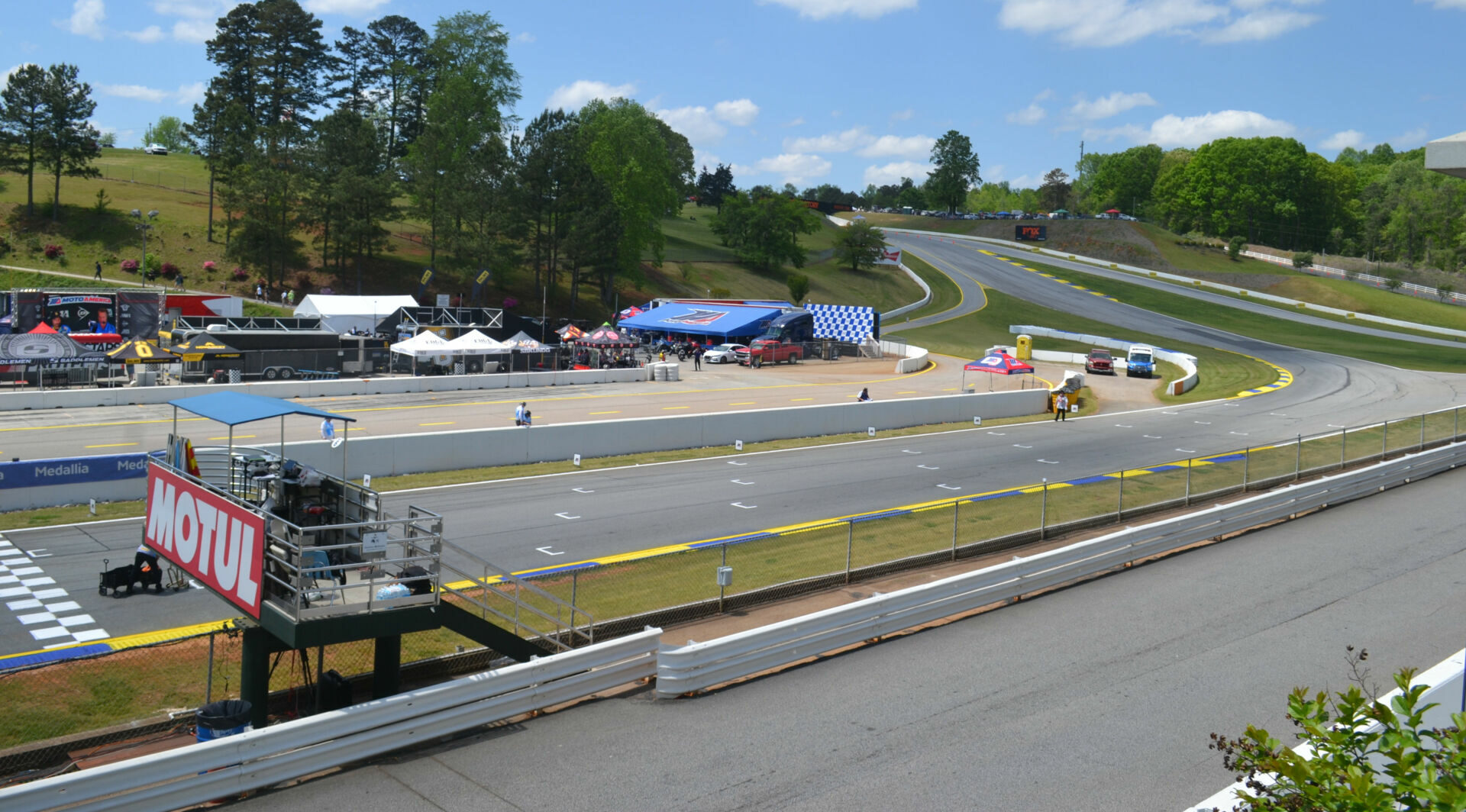 More, according to a press release issued by MotoAmerica:

BRASELTON, Ga. (April 23, 2022) – There are close finishes. And then there are tight finishes. On Saturday at Michelin Raceway Road Atlanta, Cory Alexander and his good friend Michael Gilbert nearly tied for victory in the Yuasa Stock 1000 class. After the result was decided by photo-finish, the margin of victory was one tiny 0.001 of a second, the decision going to Alexander of Tytlers Racing/RideHVMC Racing on Cycle World/Octane/Chuckwalla Raceway’s Gilbert.

And it was just one of five races held at Road Atlanta on Saturday as the MotoAmerica Championship got off to a serious start with all classes featured and all producing good races. How’s that for a good run? The average margin of victory for the five races was just 1.07 seconds.

Saturday’s star races got off to a strong start with Corey Alexander taking pole in the weekend’s only Yuasa Stock 1000 race, but it certainly wasn’t easy. The Tytlers Cycle/RideHVMC Racing Kawasaki rider had his hands full from start to finish, first with crashed veteran rider Geoff May and then with Cycle World/Octane/Chuckwalla Racing’s Michael Gilbert. Alexander and Gilbert battled it out, especially in the closing laps, and the pace picked up which made the final lap a barn burner. Seeking a way around Alexander and taking the lead, Gilbert made a brave inside pass on the final corner and nearly held on to take the ladies. Instead, Alexander prevailed in a photo-finish and took the win by 0.001 of a second.

“The pace, of course, increased a bit,” said Alexander. “The track temperature was high and the track was a bit oily. We had tried a few things before the race trying to go faster than we did in qualifying. But side grip, I had trouble. I was too strong, honestly. The lines were much tougher than they were this morning. I saw plus zero, plus zero, plus zero. Mikey never drafted me. I kind of knew we probably had a really good bike on the back right away. So basically I got to a point like, I might as well see what he’s got. So, I let him through and kind of followed him for a lap just to see what was going on, where I was better, where he was better. Finally, on his back right away, I just had to go around him, otherwise I would have hit him. I knew I could probably get back down to point six if I had a clear track, and I was trying to do that, but the lap traffic and the track were so lined up. I just got into traffic, and a few sketchy little things happened. I think I can push this lap to the end, if I didn’t escape at the end, my plan was to try to escape with about four laps to go. Either way, super, super happy. Every time I get on the podium, I have to thank so many people, and I always forget. So thank you to my whole team. All the guys who support us. I was lying in bed thinking, ‘I don’t know if I can keep running.’ So being back here is really exciting.

Former Georgia resident Josh Herrin had the best kind of reunion with Peach State on Saturday at Road Atlanta. The Warhorse HSBK Racing Ducati NYC rider, who returned to the Supersport class after several years of Superbike racing, earned his first middleweight class victory since 2015. The poleman got the holeshot in the 18-lap race and led from start to finish to claim the world’s first professional road race victory for the Panigale V2. Meanwhile, Vision Wheel M4 ECSTAR Suzuki’s Sam Lochoff, who is the first professional road racer to compete aboard the GSX-R750 under FIM and MotoAmerica ‘Supersport Next Generation’ rules, finished second. North East Cycle Outlet Racing Benjamin Smith completed the podium in third.

“I’ve been racing for 17 years now,” Herrin said. “So after a while, no matter what anyone says or does, it turns into work unless you’re really trying to have fun. Don’t even try, unless there are things around you that make you have fun I wanted to race Supersport but wasn’t sure if there were any rides available Bobby (Shek, team owner) said they were going to race the V2 this year. I didn’t even ask any questions. I just said, ‘Yeah, I’ll take it. I just want to do it. I’m glad I did. Like you said, the first victory for the team on this bike. I’m super happy with it. The team is happy. They’ve worked a lot. There’s so much that goes into this program. It’s amazing. It’s really good to to get a win for them. I’m having a lot of fun. I’m happy to be here. I’m looking forward to the race tomorrow. I feel like, physically, I’m feeling really good. The race was shortened today, so that’s what I was counting on, feeling good at the end of the race, just because coming down from the Superbike, it’s a much harder bike to ride. I feel like it’s something I have in my back pocket. I hope tomorrow we have a full race and it goes as I hope. A big congratulations to the HSBK Warhorse Racing team and to all those who support us. Thanks to all my crew. We have worked a lot. I’m really happy to be here. We go home tonight and celebrate.

In the first race of the SportbikeTrackGear.com Junior Cup on Saturday, Belgian rider Levi Badie, who is a rookie in the category, started on pole in his first ever MotoAmerica race. The BARTCON Racing driver didn’t get off to a good start and had to settle for third place on the opening lap. Max Van took the holeshot and was in the lead, but Badie passed him on lap one, but then crashed on lap two. After that, the battle was on to see who would achieve victory. The lead changed hands several times during the 11-lap event, and Alpha Omega Kawasaki rider Cody Wyman emerged victorious, picking up his second Junior Cup victory in as many years. SportbikeTrackGear.com rider Van finished, while teammate Joseph LiMandri Jr. rounded out the podium.

“I saw (brother) Kyle running through the pit lane and giving me a big gap (waving his hands),” said the youngest of the three Wyman brothers. “So I knew I could try to put my head down and try to run away. I broke my hip in a few places and suffered a small fracture in my arm last August. I didn’t walk for 10 weeks. So really, working this offseason to build this program to get some strength back in my core. I really couldn’t ask for anything better to start on Saturday for the first round.

Saddlemen/Lloyd’z Garage’s Cory West turned the tables on JLC Concrete/KTM/DiBrino Racing’s Andy DiBrino on Saturday at Michelin Raceway Road Atlanta with the India-ridden West beating DiBrino after the KTM-ridden Oregonian went out on a similar battle at Daytona.

Third place went to Tyler O’Hara of Roland Sands Design, who was forced to start from the back row, the Californian ahead of his Ulsterman Jeremy McWilliams.

“Yeah, that was a bloody battle,” West said. “I got off to a good start. Andy (DiBrino) was showing me what he had for the first time. So I kind of went to school with him there for a little while and I I could see where the KTM was strong. There are definitely places where I move pretty well. I raced past this racetrack for years and years. So I knew if I could stick with it there, It was going to be a good battle until the end Luckily this Indian FTR 1200 has legs on it Lloyd’s Garage guys are building a hell of a song The thing was working really well in the backstretch I had to stop this heavy beast in 10A a few times Andy definitely got some brakes on me there Everything went pretty well in the end I squared him off the 10B and had a good descent in the last corner there with two to go. I ducked my head, charged through the first segment, gave him a good long look back to see what kind of gap I made the first segment, and it wasn’t too shabby. So, I thought if I could do it one more time, maybe I could hold him in the braking zone at 10A. The plan worked. We caught a few little roders there in the last two corners. Fortunately, there was no drama. Brought home the team victory. Just super happy. I’ve been finishing second for years and years, and it’s just nice to finally win one. Many thanks to Saddleman, Lloyd’s Garage in Charlotte, Mission Foods for helping the program so much, and Motul. These guys are awesome.

Miller in talks with LCR Honda over 2023 MotoGP return