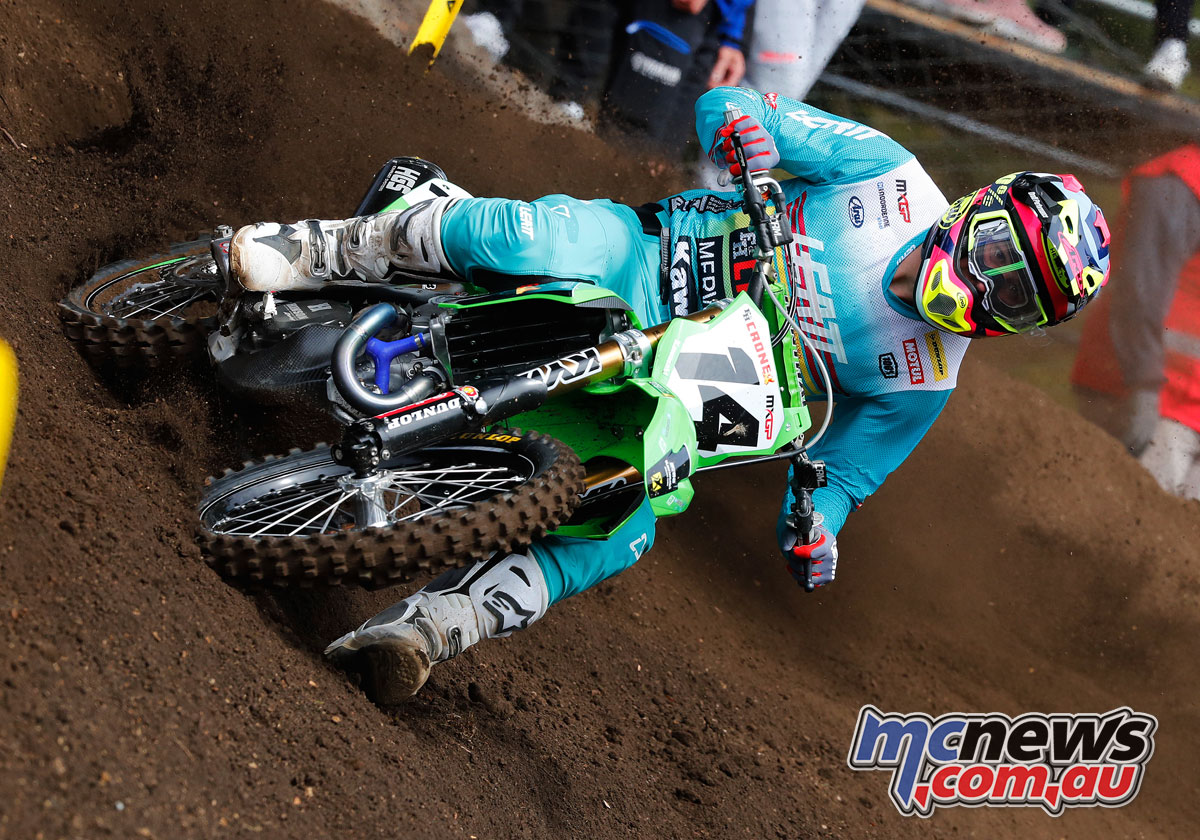 It was an action-packed day, with the morning starting with the free and timed practice sessions which saw Team HRC’s Tim Gajser on pole for both, but that didn’t translate to a win today. today, but showed he had the raw speed to be up. before tomorrow.

Australia’s top performer was Mitch Evans who finished 12th, while F&H Kawasaki Racing Team’s Jed Beaton was eliminated on the first lap when he was involved in a mid-air collision. he was uninjured but was unable to continue as the bike had been damaged in the impact.

When it came time for the MXGP qualifying race, it was Monster Energy Yamaha Factory Racing’s Glenn Coldenhoff leading his teammate, Jeremy Seewer. JM Honda Racing’s Henry Jacobi also got off to a good start but was quickly passed by Team HRC’s Tim Gajser, who then also passed Seewer for second place. Pauls Jonass of Standing Construct Husqvarna Factory Racing started around sixth.

Before the end of the first lap, Jed Beaton of F&H Kawasaki Racing and Brian Bogers of Standing Construct Husqvarna Factory Racing came together, with neither rider continuing the race. Beaton was uninjured but was unable to continue due to a damaged bike, while Bogers was left with a dislocated shoulder which was taken care of at the venue medical centre.

On lap five, Seewer passed Gajser to move back into second, as Gajser struggled with a rear brake issue, while Coldenhoff continued to lead.

In the closing laps we saw a close battle for the lead between teammates, Coldenhoff and Seewer, with the Swiss taking the lead with four laps to go. But the battle for first place between the factory Yamaha riders played into the hands of Jonass who managed to catch the two and take the win very quickly to be the new race leader on lap 12.

In the end, Jonass took his first qualifying race victory since 2018 and will start on pole in tomorrow’s races. Seewer finished second, with Prado third, while Coldenhoff moved up to sixth, meaning Renaux was fourth, with Olsen fifth.

” I was not expecting that at all. Obviously I love this track a lot and I still love racing here, but as many know, since mid-January I haven’t ridden the bike that much and in Mantua my injury opened up too; I had to do another surgery and only rode once in between, so considering everything I’ve done on the bike this off season, I can’t believe it, that this was possible. Before all the bad things started to happen I felt good on the bike and now I’m just going to take all the positives and enjoy the race like today I enjoyed the track a lot this morning we had made some small changes on the bike because in the off season we didn’t test much and now I just need some bike time so I think I can be in front at every GP. It’s a nice feeling and I have to bring that to tomorrow”

In MX2 qualifying, it was Monster Energy Yamaha Factory Racing’s Jago Geerts who landed a good jump, but it was Red Bull KTM Factory Racing’s Tom Vialle who took the holeshot and led the way. But that didn’t last long as Geerts was able to get around him before the end of the round.

Nestaan ​​Husqvarna Factory Racing’s Kay de Wolf started well but was passed by F&H Kawasaki Racing’s Kevin Horgmo who also passed Vialle for second place and looked strong. But at the end of the lap he crashed and dropped to 18th. He finished 12th in the end.

SM Action Racing Team YUASA Battery rider Andrea Adamo was advancing into the top 10 but grabbed the rear wheel of KTM Beddini MX2’s Gianluca Facchetti and fell. He did not finish the race, while Facchetti finished 10th.

On lap nine we saw Nestaan ​​Husqvarna Factory Racing’s Roan Van de Moosdijk crash as he crashed out of fourth place. He did not return to racing and went to the medical center with his condition for tomorrow unknown.

In the end, Geerts took a straight qualifying race victory under pressure from Vialle throughout the heat, as the Frenchman crossed the line 4.703 seconds behind him. Third was de Wolf with Haarup and Längenfelder fourth and fifth.

“I’m really happy. I got off to a good start, and we struggled with the starts in the first two laps, so I’m really happy with that. The driving was good, I didn’t take too much risks, the jumps were pretty sketchy but overall I feel good and I feel ready for tomorrow, hopefully I get two good starts and then we’ll see.