As of today, quads, also known as all-terrain vehicles (ATVs), must meet new stability guidelines and have point-of-sale rollover protection.

They also need warning stickers indicating the degree of slope they are overturning.

It’s a big win for safety advocates, but a big blow to dealers like Mr. Johns of Northwest Motorcycles in Ulverstone, northwest Tasmania.

Mr. Johns is fiercely opposed to changes and penalties for the sale of non-conforming machinery.

“Critical to save lives”

In 2018, the ACCC recommended stricter regulations for quads, including a star-rated safety rating system, following hundreds of fatalities across Australia, particularly on farms.

Then, in 2019, the federal government decided to introduce the new safety rules, with the first step coming into effect in October 2020.

Mick Keogh, vice chairman of the Australian Competition and Consumer Commission (ACCC), said suppliers have had a two-year transition period to prepare for the new requirements and those that still haven’t compliant risked enforcement action.

“ATV crashes are the leading cause of death and injury on Australian farms, and the mandatory safety standard will be key to saving lives,” said Keogh.

Six people have died in ATV crashes so far this year, and 2020 saw the highest annual death toll, with 24 deaths from ATV crashes.

The main cause of death was crash and suffocation when a quad rolled over someone.

Most quads weigh up to 350 kilograms.

There is no law requiring quads already in the garage or in the paddock to have roll bars installed.

Mr Johns said farmers in northwest Tasmania had been building up stocks before today’s change.

“Dairy farmers are very frustrated. They had to buy in bulk,” he said.

Three of the big manufacturers – Honda, Suzuki and Yamaha – withdrew from Australia’s supply of ATVs after the safety standards were announced.

This left some small retailers with nothing to sell.

“I have friends who are just Suzuki dealers, so once their ATVs are gone their business is gone,” Johns said.

Get the latest rural news

“We’re probably one of the lucky dealers. We have another brand that is launching side by side, but over the years we have sold a lot of Suzuki ATVs and then moved to Polaris and Polaris ATVs side by side. Mr. Johns said.

Saved by a roll bar

Dairy farmer Matt Ryan has roll bars installed on all but one of his quads and he’s happy.

“One of the girls who works for us in the dairy part of our business ran into a bank and knocked her down. If the bar hadn’t been there, the situation could have been a lot different,” Mr. Ryan.

While he supports the change, he is not happy with how it all came about, especially with the pulling of major manufacturers from Tasmania.

“It’s great to say you still have options,” Ryan said.

“If you have a local dealer that you have a relationship with and all of a sudden they’re out of the market and no longer have a business because they’ve lost that brand, that’s a problem.

“Some of the ones still on the market that we wouldn’t prefer because of their reliability. “

He installed roll bars on his quads.

“We have had it on our bike for many years and have never had a situation where we have had a problem with the protective device. The functionality of the bike is still the same as before,” he said. .

“The settlement is about saving lives.”

“We were killing farmers” 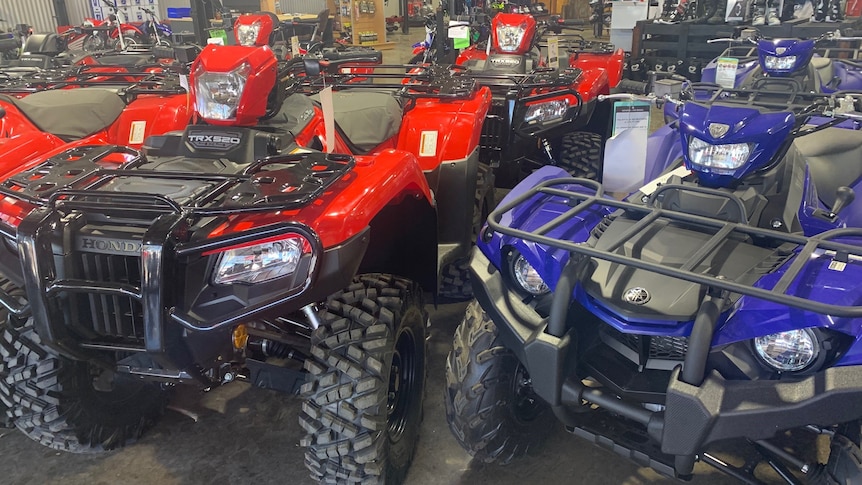 But Mr Johns said the laws would not solve the security problem.

“There are units that we sold in the late 1980s that are still in use, they will get old. No brakes. They will continue to use them because there is no choice,” a- he declared.

“I really believe we were going somewhere with pilot training and media attention. Then we turned around and banned them.

“What will happen in the next 30 to 40 years with all ATVs? Will they buy them back?

“Do they think they’ve solved the problem? “

The ACCC says occupational health and safety regulators govern the safe use of quads in work environments, including on farms.

Companies can be held responsible for incidents involving an ATV when reasonable preventive measures and training have not been provided.