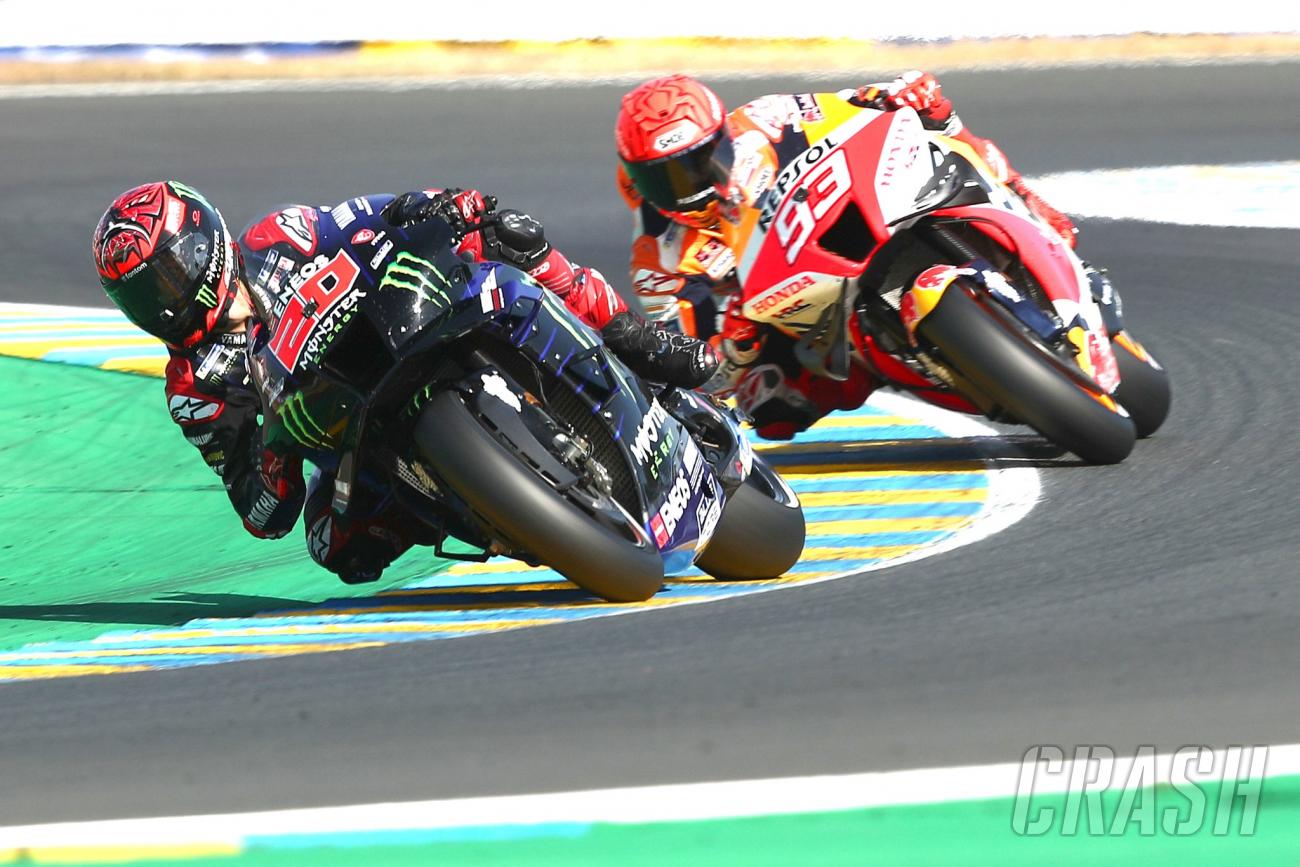 ‘Quartararo will be one of the greats of MotoGP, Marquez against the youngsters’ | MotoGP

That’s the opinion of the Frenchman’s former rival Danilo Petrucci, whose own MotoGP career began in 2012, when the top six spots in the premier class standings were taken by Lorenzo, Pedrosa, Stoner, Andrea Dovizioso , Alvaro Bautista and Rossi.

Marquez took MotoGP by storm the following season, joining Repsol Honda on the bike left behind by Stoner and launching a new era by winning six titles over the next seven years.

That run was abruptly cut short by Marquez’s broken right arm and subsequent complications at Jerez 2020.

On paper, Andrea Dovizioso, Petrucci’s factory teammate at Ducati, should have been the favorite to take Marquez’s crown that season, having been runners-up to the title behind the Spaniard the previous three years. .

Instead, as Dovizioso and Petrucci battled with the revised rear tire construction, a new wave of young guns led by Quartararo and eventual champion Joan Mir (Suzuki) took over.

Both had joined the MotoGP class, alongside Francesco Bagnaia and Miguel Oliveira, in what would prove to be excellent rookies in 2019. All four have won MotoGP races and two of them, Mir (2020) and Quartararo (2021), the world championship.

Currently in the hunt for a second premier class crown, Quartararo holds a 21-point lead over closest rival Aleix Espargaro (Aprilia) heading into the summer break.

But it’s also the level of dominance over his fellow Yamaha riders that puts Quartararo’s name among the best the sport has seen since the switch to four-strokes in 2002.

There is certainly growing evidence to back up the claim that Quartararo will be the long-awaited next “alien”.

Not only is he the only Yamaha rider to win a MotoGP race since Qatar 2020, but the closest M1 rider in the world championship standings, factory teammate Franco Morbidelli, is just 19th with 25 points to 172. for Quartararo.

Likewise, while Quartararo has won three wins and six podiums, the second-best result for a Yamaha this season is seventh by Morbidelli in the rain at Mandalika, or 11th in the dry by Andrea Dovizioso at Portimao – where Quartararo finished with 29 seconds ahead for his first victory. of the year.

“Fabio is a really, really nice guy and I think he’s showing especially this year that he’s the only one who can ride the Yamaha that way, winning all those races, despite such a big [top speed] gap on the straights,” said Petrucci crash.net.

“Because if you see the Mugello race as well, he was very quick in the corners but lacking a lot on the straight, but he’s still leading the championship and he’s still there.

“I think he will become one of the best champions in MotoGP, like Rossi, Stoner, Lorenzo, Marquez – and also Pedrosa, who never won a championship but deserved one for all the races he won. . [31].

“I think Fabio will win a lot.”

Petrucci: When I was at my best, Marquez was too!

Repeated issues with his right arm, along with two bouts of diplopia, mean Marquez hasn’t completed a full MotoGP season since 2019.

“I think, and I sincerely hope, that Marc can be the same Marc,” Petrucci said of the Spanish star, who is currently recovering from fourth surgery on his right arm.

The year before his fateful arm injury in Jerez, Marquez broke a new MotoGP points record of 420, winning 12 of 19 rounds, finishing second in six other races and only crashing out in COTA due to a technical problem.

One of those runners-up went to newly-promoted Factory Ducati team Petrucci, who made a memorable double pass over Marquez and Dovizioso to snatch an emotional debut victory at home to Mugello.

“Unfortunately, when I was at my best, I found Marquez and his Honda at their best!” smiled Petrucci, who as Pramac’s satellite driver finished second to Marquez at Misano 2017 and Le Mans 2018, as well as second to Rossi at Silverstone 2015 and Assen 2017.

The Italian, currently embroiled in a thrilling title fight as a ‘rookie’ for the MotoAmerica crown, then added a second MotoGP win as Marquez was still sidelined at Le Mans 2020.

The #93 returned to MotoGP at the start of 2021, ended Honda’s long drought of wins at the Sachsenring and, by late autumn, was constantly battling title contenders Quartararo and Bagnaia.

MotoGP looked set for the tantalizing prospect of rising stars against the longtime king of the sport. But he was put on hiatus by diplopia at the end of 2021, then difficulties handling RCV, more double vision issues and ongoing arm mobility issues this season.

“I would like to see Marquez [back to his best] against Fabio and Bagnaia and all those riders who are now leading the championship. Also Mir, who I think needs to find himself. I think they’re really, really amazing talents,” Petrucci said.

It’s also not lost on Petrucci, who left MotoGP after a disappointing campaign for Tech3 KTM in 2021, that many new stars have been inspired by Marquez’ riding style.

“If you see their riding style, it looks a lot more like Marquez than the riders of 10 years ago.

“For instance [Aleix] Espargaro’s style is very different from that of Quartararo and Martin, who move on the bike in very different ways and they are really very quick in changing direction.

“It’s really nice to watch and I think they are the future of MotoGP.”

Looking to the sport’s longer-term future, MotoE has received a boost of prestige with the announcement that Ducati will take over as supplier to the FIM Cup of e-bikes from 2023.

For Petrucci, who spent six years with Ducati in MotoGP and returned to the manufacturer for MotoAmerica this season, there is one big thing missing from electric race bikes: sound.

“I hope for me racing e-bikes is still a long way off because one of the things that helps you fall in love with bikes is the sound,” he said.

“When you hear a MotoGP bike, when you hear the sound even before the bike arrives, that’s something you can’t forget.

“I remember when I was four years old, my dad just took me out of the box and I heard Schwantz’s RGV500, I can still feel the sound of the bike heating up. It was absolutely amazing. The sound is something you can’t buy or compare.

But outside of world championship road racing, the noise of revving motorcycles poses big problems, especially for dirt bikes, which have traditionally been the entry point into two-wheeled motorsport.

“I follow e-bikes, especially dirt bikes, because where I live in Italy, and I also think it’s the same in Britain, it’s getting harder every day to have tracks” , said Petrucci.

“So having e-bikes that have no sound, no emissions can help with cycling this close to towns or close to homes.”

Petrucci revealed that the noise of petrol engines was also the main obstacle preventing him from creating a track where young people could try their hand at motorcycling.

“I would like to build a track or something for the kids to at least try. The format is like fishing, where you rent everything and can spend an afternoon having fun,” he said.

“I would like to do the same thing with small bikes, give a child the possibility to ride. But in my region, in the center of Italy, every hill has a church and it is full of people.

“For me, the problem is not how to build it, but where.

“Because noise is something people don’t like and I’ve had this problem for 10 years. We tried hard but in the end people are not really friendly with the noise, the [two-stroke] smoking and all.

“I think we’re at the start with e-bikes, but also from what I understood at the Dakar, I think in a few years all vehicles will be low-emissions.

“So although at the moment I don’t like electrics because they are usually slow and heavy, there are dirt bikes that are at the level of a normal [combustion] engine. Honestly I would like to try them, the Starks [VARG] is one of them.”