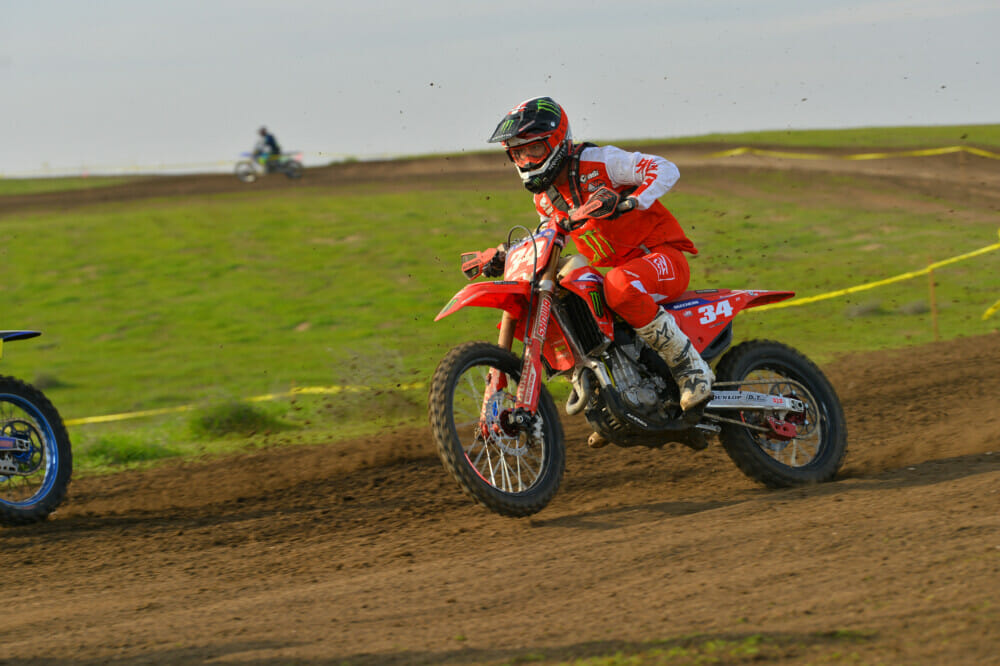 If round one is any indication, the FMF AMA National Grand Prix Championship (NGPC) series is going to be dogfighting all year.

Less than two months after the 2021 series finale, the So Cal Motorcycle Club was back with cooler, wetter conditions on a scenic but challenging course at American MX for the opener of the NGPC.
Obviously not happy with finishing second last season, Slam Life Racing (SLR) Honda’s Cole Martinez made a statement as he fended off Rockstar Energy Husqvarna’s Austin Walton (third in 2021 points) for virtually the entire 90-minute race at $8000. Dante Oliveira, the two-time defending series and FMF KTM Factory Racing off-road team champion, settled for third, about 35 seconds behind.

Walton actually got off to the best start and led early aboard his FMF/Motorex/Fly Racing sponsored FX 450, but it wasn’t long before Martinez recovered from an average start and moved into second on his Monster Energy/Lava Propane/Skechers CRF450RX. “I was so angry [botching my start like that]; I was like, ‘Are you kidding me?’ mainly because the roost here hurts so much,” Martinez said. “I kinda followed Walton just to see how things were going for him, then I made a move and took the lead.”

However, Walton wasn’t about to give up easily and ironed Martinez the next time around. “The fast lines left the door open,” Walton explained. “I was able to find better lines, more fluid stuff and picked up that pace and got it back. We were still struggling hard and kept going faster and faster.

“It was a good race; it was a clean race today,” admitted Martinez. “We were actually side by side in some corners – it was pretty sick!” Martinez was able to make a pass soon after and sprinted for a few laps to pull a slight gap, keeping it at the ladies to start the season on the right foot.

“When he passed me the last time it was really hard to get back into the rhythm because I was riding on different lines when he approached,” Walton said. Although unable to retake the lead, he declared himself satisfied with his effort and his speed.

Martinez was also pleased to see how much better things have improved at this point compared to a year ago, saying: “I think we’re definitely in a better place than at the start of last year.” After taking second behind Walton at the start, Oliveira had an unusual slight upset on his Red Bull/Dunlop/THOR backed 450 XC-F and lost a few places but just as quickly recovered third.
However, he found himself unable to go any further and said: “I struggled a bit, just with the fluidity – I was just trying to be too precise I guess – not like I knew. drive. I’ll learn from it and push the rest of the year.

3 Bros./Hatch Racing Husqvarna’s Dalton Shirey got off to a similar start to Martinez and was fourth at the halfway mark, finishing one minute and 45 seconds behind Oliveira.

“I dragged [SLR Honda’s] Jack [Simpson who holeshot our line] for the first two laps and I kind of understood what he was doing. He was charging pretty hard those first two laps, so I kind of went with him and let the race and the track come to me,” explained Oliveira.

Having been unable to race for the better part of two years in Australia, Simpson landed a spot on the SLR Honda team that needed a Pro II rider after LaFountaine moved up to Open Pros, having won the last two Pro II championships. . Mainly motocross in Australia, Simpson’s very first GP-style race reminded him of the old Thumper Nats in the late 90s. “I liked it, it was good!” he stated. “I got off to a good start – I think I led a lap or something. Some of my lines weren’t as good as the guy behind me (Oliveira). Once he got past , I followed his lines and toned things down a bit – wasn’t getting beat up as much and didn’t do any testing. It’s stock with an exhaust on it! We’ve got a lot of improvement [possible], but it’s just good to have a really good shakedown.

Pro Women saw Elite Off-road KTM’s Brandy Richards embark on another breakaway with a 25th place finish overall. Ava Silvestri debuted with 3 Bros./Kilmartin Racing GasGas for second place in the class while JCR Honda’s Tarah Gieger finished third. Along with paying for the day and gear at the post-race awards, Richards was also celebrated for being the 2021 AMA Motorcyclist of the Year. CN

Five stories that will unfold during the 2022 WorldSBK season? | Superbikes of the world