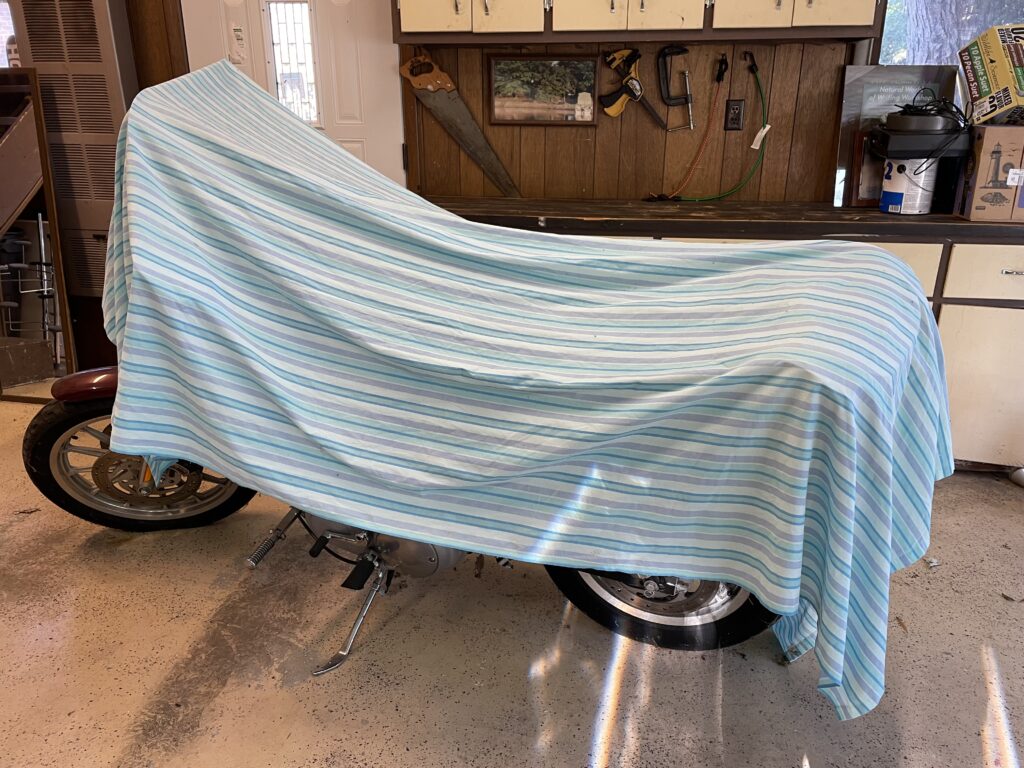 One guy knows he’s hit those “golden years” when his wife says he should sell his motorcycle, and for the very first time he’s not joking that he’d rather be dead.

I have owned motorcycles for forty-six years.

But since I was sixty-five, spine surgeries have kept me from enjoying my beloved Harley-Davidson the way it should. A nice looking 1200cc Sportster Sport, it has been sitting under a sheet for a long time. Now Nancy wants to do some heavy work in the garage and says a motorcycle I can’t ride is just getting in the way.

I guess I see his point.

Still, motorcycles have been a real source of joy. Dangerous? Yes, they certainly can be. Years ago, when I was working for The Muncie Evening Press, I started a short-lived motorcycle column. Asking his colleagues to suggest catchy names for him, my late newspaper hero and friend Dick Stodghill came up with this alliterative gem: â€œSkidmarks and Screamsâ€. The point is, in 40 years of riding a motorcycle, I have never spilled a drop of blood.

Ride a bike? I’m pretty sure I lost a gallon or more.

Now that I’ve kind of agreed to sell it, I look back on my motorcycle history with a mixture of tenderness and sadness. I have owned eight, starting with a Honda 350. What followed was a classic 600cc BMW 60/5, which I wish I had again; two Yamaha 750 cc, the fastest motorcycles I have owned; a Honda 750 dressed for the tour; an 850cc Suzuki which was another great road bike, and two Harleys, current mine and a 1000cc Lowrider which was the meanest – which also means the coolest bike I’ve owned.

But if owning motorcycles is fun, collecting stories about them is better.

Riding the Indianapolis Motor Speedway for the Indy 500 with my late brother-in-law Bobby and his biker buddies was always a pleasure. The same was true of gathering in the original Snake Pit, although that can also be revealing and intimidating. The biker crowd was rather friendly, however, and the troublemakers found themselves handcuffed to a chain-link fence. Kneeling in the saddle of my Lowrider, I could only see the first turn, but it ended up being a dramatic place to watch Gordy Johncock hold a Rick Mears in charge for victory in 1982.

This Lowrider was just as stable when moving. It sounds crazy, but crossing the night all the way to Atlantic City once with a buddy, I momentarily fell asleep to doze off once or twice before he approached me, honking his horn to wake me up. My Harley didn’t waver, and obviously I wasn’t dead.

Back then, before everyone started riding Harleys, our pride in riding American motorcycles was palpable. We were also proud of Harley’s bad boy image, though in truth I remained a wimp who happened to own a Lowrider. Part of the joy was wearing black Harley-Davidson t-shirts, with mostly crass slogans on their backs. But a more thoughtful T-shirt that required at least a basic knowledge of American history to appreciate the star logos of Honda, Kawasaki, BMW, Moto Guzzi and other former Axis manufacturers. Its wording? â€œBrought to you by the people who brought you WWII. “

We took this to heart.

Nevertheless, I was obviously no stranger to foreign motorcycles.

I had been in love with BMWs ever since my dad hired a former classmate to repaint the woodwork in our house. This guy was nice but a little slow mentally. My father was seething as he told me how, as a child, our painter’s embarrassed parents hid him in the basement when others visited him. This man could drive, however, and his pride and joy was his classic black BMW. During the week he painted houses. On weekends he’d put endless miles on his odometer, looking for what? Comfort? Agreement? The strength to forgive? The strength to forget?

Whatever the reason, he struck me as a noble character. When I traded in my Honda 350 for my BMW, I was ridiculously proud of this super-smooth road bike.

Then one warm Friday in early spring, I returned home to northern Ohio. Sunday, as happens in early spring in the north, the sky spat freezing rain on my return trip. The drive back to Muncie was horrible as it was cold, wet and icy. That day I learned how to judge a bad ride: In five hours on the road, I stopped three times to buy dry socks.

Honestly, I was about to pack my bags and look for a motel. Suddenly, about twenty miles south of Findlay, Ohio on I-75, we saw another biker heading north towards me. In a case of instant motorcycle camaraderie, we started to greet each other wildly, congratulating each other on being the only two morons crazy enough to ride on two wheels in the midst of large numbers of people riding around in heated, enclosed comfort. .

The emotional charge of our meeting forced me to ride a motorbike at home.

Other joys of motorcycling? The freedom of the open road. The hoarse sound of a large V-twin engine at work. And yes, the joy of turning the throttle and practically flying on the ground.

It’s funny, though. Looking back, what really comes to mind are country walks past stunning fall wildflowers lining roads along which endless stalks of corn approached harvest. Then there were those magical evenings where a huge orange moon rose from the east over the fields as the farmers’ combines brought in that year’s crops.

To soak up such beauty, it was best to go thirty miles an hour or less, I found. It’s much slower than a Harley-Davidson likes to travel.

Wondering how much it costs to buy a nice scooter?

We listen, analyze your unique situation and prepare an action plan that best suits your needs. Contact one of our attorneys to schedule a consultation, or for more information call 765-289-0661 or visit our Facebook page or website at beasleylaw.com.

Former writer and longtime columnist for The Star Press in Muncie, Indiana, John Carlson is a storyteller with an unwavering appreciation for the wonderful people of East Central Indiana and the stories of their lives, no matter how funny, poignant, inspiring or all three. . John’s Columns appear on MuncieJournal.com every Friday.

“I like four-stroke bikes a lot, but both strokes stay in my heart” – Valentino Rossi