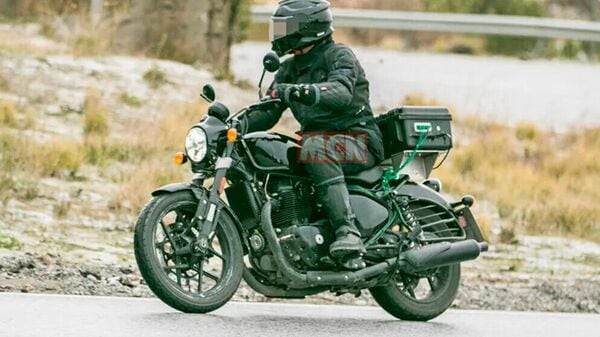 The new Royal Enfield Shotgun 650 is expected to go on sale in India later this year. It may be the top product in the brand’s portfolio.

Royal Enfield is gearing up for its upcoming Shotgun 650 motorcycle which has now been spotted testing on public roads overseas. The bike appears to be production ready and the new set of images brings to light some new details about the bike.

The prototype has clearly evolved a bit since it was last spotted testing a few months ago with a square footprint on the sides. Up front, this appears to be the final design of the headlight cowl which is flanked by traditional bulb indicators. One of the major additions here is the use of a full LED headlight unit which is new to Royal Enfield bikes.

The bike is equipped with a two-pod console. As seen earlier, the larger unit could hold all the necessary details such as odometer, speedometer, fuel level readings, the smaller one could be the tripper navigation system.

The bike will be powered by the same 650cc twin-cylinder engine found on the existing Continental GT650 and Interceptor INT650 motorcycles. However, the company might deploy this engine in a different state to match the character of the Shotgun 650.

Also, another key part of the new images is that the bike can be seen riding on USD front forks and twin rear shocks. For anchoring duties, there is a single front and rear disc. Also, the design of the alloy wheels on the bike seems to be quite fresh.

As for the official debut, expect this motorcycle to go on sale in India sometime in 2023. It will likely be the top end product in the brand’s portfolio.

All Blue: An SP1000 to celebrate the centenary of Moto Guzzi