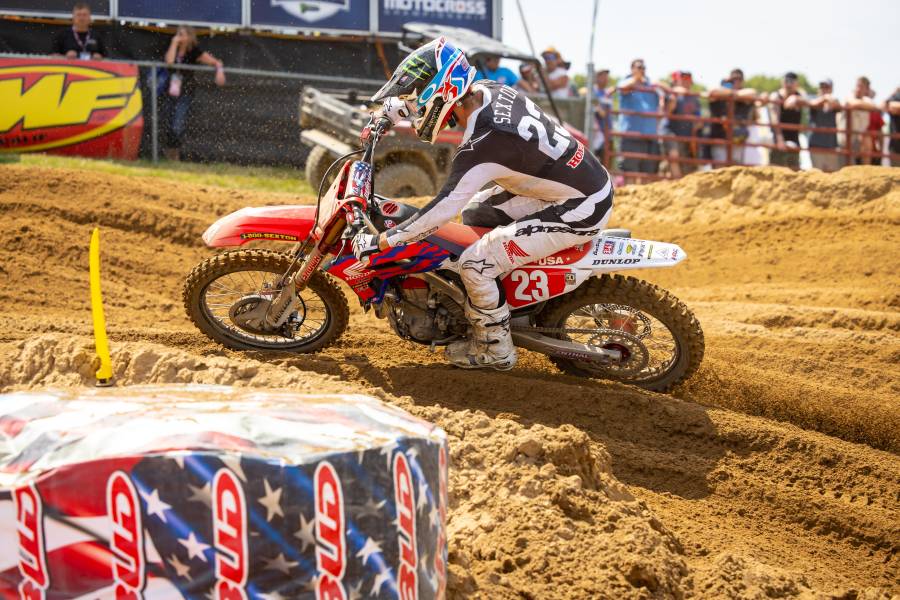 Ken Roczen managed a fourth-place finish in 450 Moto 1 and led Moto 2 before the lingering effects of the illness dragged him down to seventh and fifth overall. Jett Lawrence’s first 250 race ended early with a mechanical issue, but he bounced back to win Race 2 for ninth overall.

Sexton finished the first lap of the 450’s first outing in fifth place, then moved up a spot to around a quarter. Lap 10 saw him pass his teammate (who had run third for the first part of the race), and four laps later Sexton was past Joey Savatgy for second. He finished the race six seconds behind Eli Tomac, with Roczen fourth. The German led the first 10 laps of Moto 2 before his illness caught up with him, and he slowly slipped to seventh place. Sexton had started poorly, placing him sixth after the first lap, and he had a knockdown when he hit a fallen Jason Anderson. Nonetheless, he raced through the field to second place on lap 11, crossing the line again just six seconds behind.

Hunter Lawrence got off to a good start in 250 moto 1 and led the first five laps before being passed by his brother. When Jett ran into his problem, the elder Lawrence took the lead again, but Hunter was in conservation mode and was passed by Jo Shimoda with six laps to go. Moto 2 saw Hunter race early again, as this time Jett recovered from a poor start, finishing Round 1 in eighth. On lap 5, the defending champion was second and he moved his brother to the front just after the halfway point. Jett and Hunter were 1-2 at the finish, but Shimoda’s third-place finish gave him the overall win.

Working on an electric scooter platform for the Indian market with localized parts: Yamaha

Advanced… | Why do you need advanced motorcycle training?