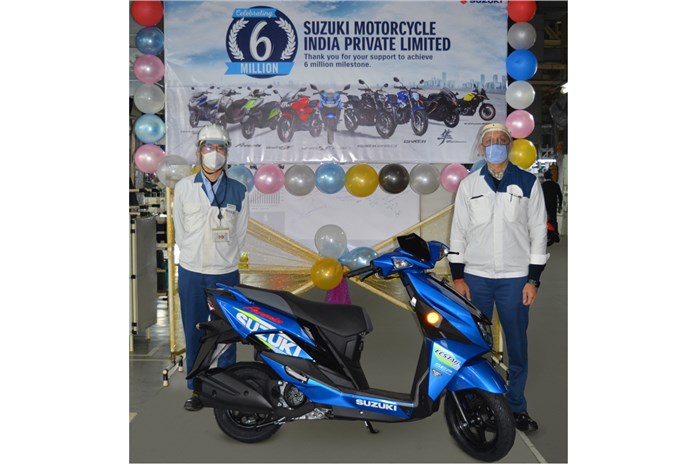 The new Suzuki Avenis 125 is the six millionth two-wheeler to roll off the production line.

Suzuki Motorcycle India achieved a historic milestone by bringing the six millionth two-wheeler off its production line at its factory in Gurugram, Haryana.

This milestone comes 15 years after the company began independent operations in the Indian market in February 2006, following its previous joint venture with TVS which lasted 19 years between 1982 and 2001. The new plant has an annual production capacity of 5 40 000 units.

According to Satoshi Uchida, MD, Suzuki Motorcycle India, “This year marks the end of 15 years of Suzuki Motorcycle India in the country. It is indeed encouraging to also announce the launch of our six millionth Suzuki two-wheeled product in India from our factory in Gurugram. We thank all of our customers for the trust and loyalty they place in the brand. We are delighted that we were able to reach this milestone despite the challenges posed by Wave 2 and the global semiconductor shortage across the globe, ”Uchida added.

Leading the company’s scooter sales, the Access 125 sold 2,82,000 units between April and October 2021, registering a 49% year-over-year increase and accounting for 83% of Suzuki Motorcycle India sales in the first seven months of fiscal year 2022. The company sold a total of 3,37,817 units in the same period to record 48% year-on-year growth on 2,277,721 units sold between April and October 2020, and retained its third place in scooter sales after HMSI and TVS Motor Company.

Decrease in sales of two-wheelers in December 2021

“It’s ridiculous”: 27 days before the bank collects the mortgage request

Marc Marquez to miss 2022 Honda RC213V unveiling due to diplopia