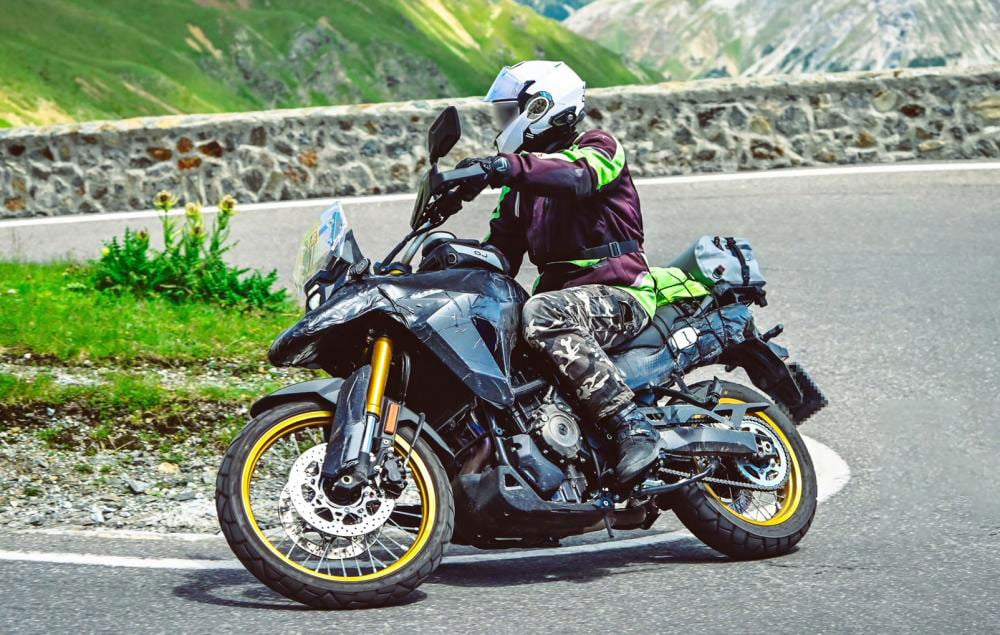 It’s been a minute since Suzuki showed off a completely fresh motorcycle of any stripe, and judging by these new spy photos captured on Italy’s famous Stelvio Pass, this dry spell may be on the point to end. At the same time, it would be the end of a nearly 20-year run for the V-Strom 650.

While the 650′ Strom, first introduced in 2004, has a loyal following that includes many adventure riders, there’s certainly room in the market for a competitive middleweight version more capable of all- terrain, and this trial mule looks like it could scratch that itch. While in the past Suzuki was more at home in the arena with street-focused rivals like the Kawasaki Versys 650 and BMW F750GS, from what we see in spy photos they’re looking to head more towards dirt-focused rivals like Yamaha’s T7 or Touareg 660.

And by the time it gets here it will likely have even more rivals, including the rumored Honda XL750 Transalp which saw a re-branding on August 12, 2022.

First big change for Suzuki’s new car? From what we can see, the engine will no longer be the V configuration but rather a parallel twin, planned to be 700cc, which has been on the drawing board for many years. According to a tech article written by veteran gearhead Ben Purvis for bennetts.co.uk, this mill first appeared as a turbocharged 588cc in 2013.

Two years later, the engine was shown at the 2015 Tokyo Motorcycle Show as a still-turbocharged 700cc called the XE7. In the years that followed, patents for both turbocharged and naturally aspirated versions of the 700cc engine, located in a variety of frames, fluctuated, but never stalled. So far, that is.

So in the photos we see a new (normally aspirated) parallel-twin engine nestled in a new frame. The swingarm also looks different, at least in its more rounded shape, while a switch to a new upside-down fork dampens the front end. The most interesting detail for adventurers looking for a capable new middleweight might be the test bike’s 21-inch spoked front wheel and 18-inch spoked rear, promising true all-terrain intent. .

Considering how the current V-Strom 650 is sold in a standard style, as well as the XT Adventure variant, it will be curious to see if more versions of this bike are presented from the start, as Suzuki did when he launched the revitalized 1050 Series in base, XT and XT Adventure trim in 2019. Another curiosity will be whether the V-Strom name lives on after the V-twin element is gone.

Despite the 650′ Strom’s loyal followings and the cool custom adventure bikes it inspired, including the super cool Dark Evo 2 DIY off-road kit sold by Trail Discovery Concept, now might be a good time for Suzuki to totally reinvent his middleweight adventure entry.

Visually, Suzuki’s new middleweight has the adventure beak, although it looks squarer than the pointed nose found on the current model, giving it a more family-friendly resemblance to the V-Strom 1050. the headlight looks more modern with a square shape. The fairing looks more streamlined, although it’s hard to be certain with the camouflage wrap.

Because we only have the left side view, we don’t know what the exhaust looks like, but we can tell that the brakes appear to be carried over from the current bike, while the skid plate appears wider and sturdier than what comes on the current Adventure XT.

By the way, the photo, which first appeared in Motociclismo in Italy, was not captured by a magazine, but rather by Kanyarfoto, an outfit that photographs tourists riding on Europe’s famous mountain passes, the same way Killboy takes shots at riders on the infamous Dragon in Tenders Gap, North Carolina.

Suzuki has yet to make an official announcement regarding the new bike, but we expect this successor to the V-Strom 650 to be a 2023 model shown at this year’s EICMA show in Milan next month. The mere fact that it was racing over the packed Stelvio Pass, one of the most famous rides for motorcyclists around the world, means Suzuki is ready for some publicity.

Jamie has been a motorcycle journalist for over 30 years, testing the full range of motorcycles for major print magazines and specializing in stories related to adventure travel. To date, she has written and provided photography for articles describing what it’s like to ride in all 50 states and 43 foreign countries, receiving two Lowell Thomas Society of American Travel Writer’s Awards along the way. Her toughest adventure to date was participating in the 2018 GS Trophy in Mongolia as an embedded reporter for Team AusAmerica.