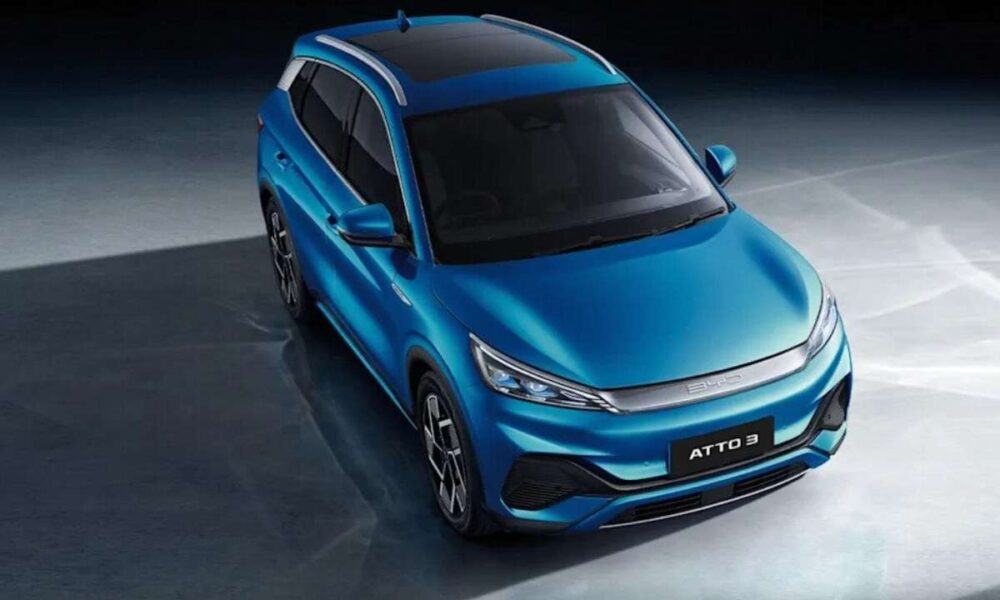 Chinese automaker BYD (Build Your Dreams) will launch its second electric vehicles, the BYD Atto 3 in the passenger vehicle category on October 11, 2022. Intended to compete with the MG ZS EV and Hyundai Kona EV, the new BYD Atto 3 is the price should be between Rs 30 lakh and Rs 35 lakh (ex-showroom). In terms of proportions, the new Atto 3 is 4,455mm long, 1,875mm wide and 1,615mm high and has a wheelbase of 2,720mm. The electric SUV is powered by a synchronous electric motor that produces 201hp and 310Nm of torque. The electric motor sends power only to the front wheels and it also features regenerative braking technology. It is supposed to achieve a 0-100 km/h acceleration in just 7.3 seconds. The new model is likely to come in two batteries – 49.92 kWh with a range of 345 km and 60.48 kWh with a range of 420 km on a single charge.

Maruti Suzuki is working on a new long-wheelbase 5-door version of the Jimny lifestyle SUV, which is set to be unveiled at Auto Expo 2023. The new model will rival the Mahindra Thar and Force Gurkha. To be based on the Jimny Sierra, the new Jimny 5-door will ride on a 300mm longer wheelbase and the length will be increased by 300mm. It will be powered by a 1.5L K15C Dualjet gasoline engine with a mild hybrid system. Transmission choices will include a 5-speed manual and a 6-speed torque converter automatic. It will come with the Suzuki AllGrip Pro AWD system as standard.

Maruti Suzuki is testing a new SUV coupe based on the Baleno sedan. Dubbed the YTB, the new Baleno Cross is set to be unveiled at Auto Expo 2023 in January with a likely launch in February 2023. It will be sold exclusively through the NEXA premium dealer network. The new model will compete with the Honda WR-V, Nissan Magnite, Renault Kiger and Hyundai Venue. The Baleno Cross will be powered by a 1.0-litre Boosterjet engine that produces 102hp and 150Nm of torque. It is likely to be offered with a 5-speed manual transmission and a 6-speed torque converter automatic transmission.

After introducing the new Urban Cruiser Hyryder SUV, Toyota plans to launch the new generation Innova Hybrid in the country. Likely to make its global debut in November 2022, the new model will first go on sale in Indonesia. The new Innova HyCross MPV is rumored to be launched in our market in early 2023. The model will be designed on the lighter unibody platform instead of the ladder frame architecture and will be a front-wheel drive MPV. . It will be around 4.7 meters long and ride on a 2890mm long wheelbase. The new Toyota Innova HyCross is expected to be powered by a 2.0L gasoline engine with the heavily localized version of the THS II (Toyota Hybrid System). The latter has a dual-motor configuration that improves its high torque and fuel efficiency. There will be no diesel engine.

Honda has officially announced the launch of an all-new compact SUV in the Indian market in 2023. It will be an SUV under 4 meters and will be based on the Amaze platform. Honda’s new compact SUV is expected to be unveiled around Auto Expo 2023 in January. It will be positioned against the Maruti Brezza, Hyundai Venue, Kia Sonet and Tata Nexon. The new model is likely to share engine options with the City sedan, which includes a 1.5L NA petrol and 1.5L Atkinson cycle engine with powerful hybrid technology.

Mahindra will launch the new Thar lifestyle 5-door SUV in the country in 2023. Slated to be unveiled at Auto Expo 2023, the LWB Thar will be based on the stiffer platform and feature penta-link suspension. The new model will offer a more practical interior and a larger trunk compared to the 3-door model. It will retain the existing 2.0L turbo petrol and 2.2L turbo diesel engines; however, the motors will be calibrated for more horsepower and torque. Transmission choices will include a 6-speed manual and a 6-speed torque converter automatic.

After launching the new Hunter 350, RE is preparing 4-5 new motorcycles for the Indian market. The company will launch two new 650cc motorcycles namely Super Meteor 650 and the Shotgun 650. The Super Meteor 650 will be a cruiser motorcycle with a design inspired by the Meteor 350. On the other hand, the RE Shotgun 650 will be a single-seater Bobber. It is basically the production version of the SG650 concept, which was unveiled at EICMA 2021. The new bikes will be powered by a 648cc parallel-twin engine featuring fuel injection technology. This engine produces 47PS and 52Nm of torque. The cruiser will have a 6-speed gearbox with slipper clutch and assist.

Royal Enfield has begun work on the next-generation Bullet 350, which will share underpinnings with the Classic 350 and Meteor 350. It will be based on Royal Enfield’s new “J” platform. The new Bullet 350 will be powered by a 346cc air-cooled single-cylinder engine that produces 20.2hp and 27Nm of torque. The engine will be mated to a 5-speed gearbox.

It is no secret that Bajaj-Triumph JV is preparing new motorcycles for Indian and global markets. The new bikes have been tested multiple times, suggesting the launch could happen soon. The new Bajaj-Triumph motorcycle is expected to be launched in early 2023. These motorcycles will have a retro-style design and come in several body styles including Scrambler and Classic. Newer bikes are likely to come with a single cylinder engine of around 350cc to 400cc. It will be positioned opposite the RE 350cc, BMW G310R and KTM 390 motorcycles.

Hero MotoCorp is testing two new motorcycles – an Adventure bike and a fully faired sport bike with larger-capacity engines. Rumored to be called the Hero XPulse 400, the new bike will be built around a new 421cc engine. The new Hero XPulse 400 will be powered by a new 421cc engine which is expected to produce around 40hp of power and almost 35Nm of torque. The new motorcycle is expected to be unveiled in the first half of 2023, most likely at the Auto Expo in January, while the launch is expected in the second half of next year.

Buyer’s Aid: How Homebuyers Can Get a ‘Good’ Loan Before the October Deadline | Personal finance | Finance