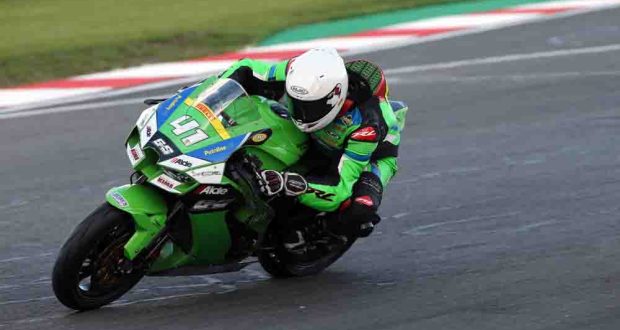 It was a weekend to forget for the three G&S Racing Kawasaki riders, Kevin Keyes, Milo Ward and TJ Toms at Donington Park for the penultimate round of the championship.

After falling in free practice on Friday, Keyes was unable to run, while Ward also suffered a crash in qualifying and was unable to go out for the first race but was 24th on the second outing.

Toms qualified in 24th place but got caught in the pouring rain and slipped in the first race – but went on to take 23rd place in the second race.

Keyes didn’t have a chance to fall in Friday’s wet free practice session and although he felt good at first his hand gradually became sore so he made it to the center medical.

An x-ray showed the screws had been removed from the plate in his hand.

He had a medical exam on Saturday before qualifying but was deemed unfit to race so his weekend and season are now over.

Ward, meanwhile, got off to a good start to the weekend, leading the standings in a wet practice session on Friday.

He then posted 15th place in qualifying, but in the closing seconds of the session he made a mistake and fell to the old hairpin.

He was not injured, but the bike was badly damaged and there was not enough time to make the repairs in time for the first race on Saturday.

However, with a lot of hard work on the team’s part, they got it in time for race two.

But, due to the lack of a start in the first race, he was moved back to 11th place for the start of the second race on Sunday where he drove well to complete the 14 laps in 24th position.

Toms also had a rough time as he was knocked out by another driver in qualifying and ended up in the tenth row in 24th place for the first race.

But his race was short-lived as he crashed in the first lap in the pouring rain.

Once again the team did a fantastic job fixing the bike in time for race two and he started from row 10.

He rode well in difficult conditions and brought the bike home safely in 23rd position.

Tom Fisher, who is the manager of the Wyberton-based team, said: “It was the toughest weekend we’ve ever had with so much damage to the bikes due to the weather and the Donington Park circuit. being so slippery.

â€œKevin crashed in training and injured his hand so he couldn’t run. TJ was knocked off his bike in qualifying by another rider, then Milo fell in the same session in appalling weather conditions after such a good qualifying and we couldn’t fix the bike in time for him for the first race. .

â€œThen TJ crashed during the race, so it was more damage to repair. TJ and Milo had to start from the back of the grid in the second race and given the lack of track time and crashes they did very well.

â€œWe never stopped working really hard all weekend. Thanks to the team for their hard work and we are moving to Brands Hatch and hope for an easier weekend. “

The team will compete in the annual Stars at Darley races this weekend ahead of the final round of the Superstock Championship at Brands Hatch from October 15-17.