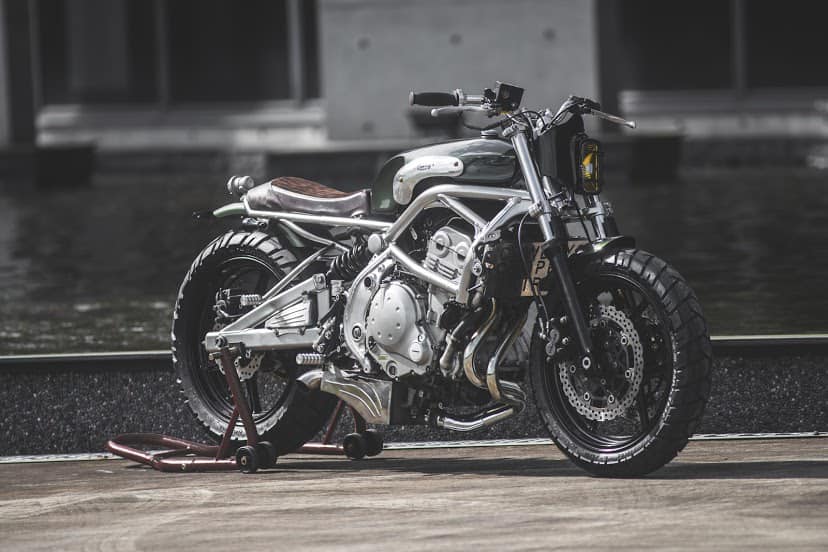 Judging by the name of the workshop, you might be inclined to believe that Taipei-based Cowboy’s Chopper is all about bobber or chopper style makeovers. However, this is far from the case because Alex Gao and his team seek to diversify their portfolio as much as possible.

As you browse the company’s Facebook page, you’ll be greeted by custom two-wheelers of any type, and they all look absolutely stunning! Earlier this year, we took a look at an ominous Harley-Davidson Sportster that does a terrific job of showing what these Taiwanese artisans are capable of.

Several months have passed since we first inspected this creature, so it’s time to wow our eyes with the sight of yet another bespoke piece of jewelry born under CC’s roof. This time around, the donor chosen was a 2006 model from Kawasaki’s ER-6F lineup, fitted with a fuel-injected 649cc parallel-twin engine mated to a six-speed gearbox.

With four valves per cylinder and a solid 11.3: 1 compression ratio, the liquid-cooled Predator will be more than happy to deliver up to 72 hp and 49 lb-ft (66 Nm) of torque. When it hits the bike’s chain-drive rear hoop, that force translates into a respectable top speed of 130 mph (209 km / h).

All things considered, the stock ER-6F doesn’t really stand out in any particular way, but the same can’t be said for the modified showstopper pictured above. To begin with, Gao’s mototherapists removed the standard body in its entirety, then amputated the original subframe to make room for a handmade substitute that was created in-house.

The new skeleton supports a stainless steel rear fender and spare taillight, as well as a sleek two-seater saddle wrapped in suede and brown leather. Looking north, we find a unique aluminum fuel tank with polished side covers and cafÃ© racer-style knee notches, as well as an asymmetrical front fascia that flanks a yellow-tinted retro headlight.

You’ll spot a round LED fog light on the left side of the front wheel, while a slim fender is visible between the fork legs. The ER-6F’s handlebars were scrapped in favor of a shiny bolt-on alternative, sporting new levers, rubber grips, and premium switchgear. In addition, we are also greeted by digital instrumentation and a unique set of machined aluminum footrests.

In the powertrain department, abundant airflow is made possible by high-end filters that replace the factory airbox of the motorcycle. On the other end of the combustion cycle, the Beast is equipped with a menacing exhaust muffler, which has been constructed from scratch in stainless steel. Finally, Cowboy’s Chopper topped it off with a nice color scheme, consisting of a dark green tint, shiny silver, and a stealthy coat of black paint on the wheels.

From esteem to Lamborghini, the journey of John Alukka | Fast Track | Automotive News