I was also affected by the ADV bug after recently testing the Honda CB500X.

BHPian Rachit.K.Dogra recently shared this with other enthusiasts.

A new set of updates:

The last 2 months have been fun, anxious, satisfying, stressed, frustrated with the R1. We’ve done quite a bit on the R1 and also took it on a long overnight trip.

I’ll start with the updates:

We had planned to tackle the cone set first. I ordered a replacement cone set from the UK and since we found someone who could haul things I got carried away and also ordered a Healtech quick shifter. The reason we went for a quick health change is that I don’t plan on upgrading to a Power Commander just yet. I want to keep the stock of bikes, otherwise getting the Power Commander Quick Shifter is cheaper if you have a Power Commander on your bike.

To be fair, changing the cone set on the bike was a real pain. The elder had shifted slightly to the lower corner and sat in his strange new position. Which caused the aluminum frame holder to take on this awkward shape as well. And since it was on the lower end, there was very little leverage so we could apply force to push the new seals through. It took almost 3 hours of too careful hammering to get the new seal in place, and our bodies were shattered by that time. But we had a big surprise ahead.

Bike on the jack.

When Arjun was about to put the forks back on, he was trying to take a close look at which leg was on which side and he was horrified to see a crack in the fork leg on the part that holds the axle in place. There are pinch bolts to tighten this part and it looks like someone has tightened them too much and the part has cracked. It was a big blow as we had planned an overnight trip the following weekend. I left the bike with Arjun to do its magic and returned a little discouraged.

We had 3 main options:

We did some research and found that this is not a load bearing part and its main job is to hold the axle in place. Arjun worked his magic and came out with a fix. 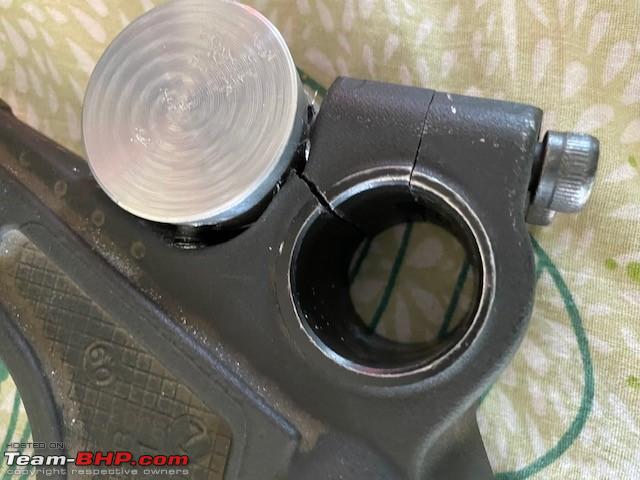 We made a metal part and secured it with nuts to support the cracked part. So far it has worked well.

While all of this was going on, we also tried to understand the noise coming from the forks. We tried to squeeze the forks with our hands and opened the top to check the fork fluid. We felt the fork shims are loose or something and that’s where the noise is coming from. Also, the fork oil was dirty and we felt the forks didn’t offer the damping they should. Fork maintenance was therefore next on our agenda.

Arjun always wanted to remove the exhaust baffles to hear the full thunder of the transverse plane. I was a little skeptical as I didn’t want a very loud bike. However, we removed the spoilers just to give it a try and it made a big difference to how the bike felt after that. It seems that the bike breathes better now. The throttle at low revs became smoother and the low rev complains of the bike has improved as well. I plan to keep it that way only. Fortunately, the exhaust is only 10-15% louder and not too loud.

We then looked at mounting the Quick shifter on the bike. Since this is a stand-alone system, you need to plug it into the ignition coils so that the spark can be cut for the change to happen. When we accessed the ignition coils we find the throttle bodies just held on the crankcase. They are supposed to be tightened by the clamps provided, however, anyone who has worked on the bike before just didn’t tighten it and just kept the throttle body and airbox above the intake. It really spoiled Arjun’s mood. The admission had a lot of dust around it because of it. And when Arjun checked the intake valves through the opening, there was also a lot of carbon build-up. We plan to fix this in the near future by using a sea foam cleaner. But back to the quick shifter, oh my god what a difference it made to the driving experience. I still need to fine-tune it a bit as it currently cuts power sometimes when I try to beep while downshifting too. But the gear changes are smooth and the bike looks even more like a rocket now. Plus, it eliminated the awkward gear changes I’ve always experienced with the bike.

The bike worked really well these 2 weeks. I was on the moon and everything was laughing. These 2 weeks have shown me what the R1 cross-plane is and I dare say that nothing else will ever do it for me again. I am spoiled for life. The throttle response is so electric, the torque delivery is so immediate, and the thrill it gets with that deep exhaust rumble is pure ecstasy.

I was so happy and laughing that I was afraid of hurting him. Well, I messed it up. As I shared earlier the bike had some cold start issues, one fine day the bike threw an error code 12 on the dashboard and refused to start. 3 weeks of reading, research and diagnosis later, Arjun looked at the starter. The bike was opened again, the starter was removed and he could sense the engine was having problems. Long story short, he fixed the starter, added new bushings to it, replaced the starter relay and luckily the bike was back. The cold start problem is also gone. I can’t even say how much I owe him. This was a major relief as error code 12 in the manual means a crank position sensor error and our research suggests that it could mean quite a few things. He also feared an ECU problem. But luckily, God was kind enough not to take us down this path.

To date, the bike is with Arjun for the reconstruction of the fork. I keep my fingers crossed on what we might find out now.

When we fixed that fork issue we knew we would be coming back to forks so we thought about experimenting a bit. Arjun never liked the position of my bike and felt like it looked elevated. So we dropped the 10mm clip in front. To improve the ride a bit on the bike, we’ve gone for fully smooth front and rear preloads. This caused the bike to fall even more. Now it felt like a pretty aggressive sitting position. What do you do with such an aggressive sitting position, you go on tour.

We had planned a night trip to Dehradun and Mussourie. We finished the bike after the fork legs were repaired around 3am. We hardly slept and went on tour at 5 on the R1. Any intention to pack luggage in the backseat of the R1 was destroyed within 5 minutes of driving, as the R1’s exhaust burned a brand new Rok strap. Well my luggage went on Arjun 390 ADV. R1 was in good company on this trip with a 2013 GSXR1000, 2011 Fireblade, 390 ADV and 390. It was a pretty crappy trip as it seemed like all of North India had decided to show up. in Mussourie for this weekend and we were there on these bikes beating all of that traffic. However, the riding was fun in places. Cruising the R1 at good speed on the freeways was enjoyable and although the turns were mostly infested with traffic, I had my moments. Above all, we came back alive and honestly the bikes performed admirably in these less than ideal conditions. 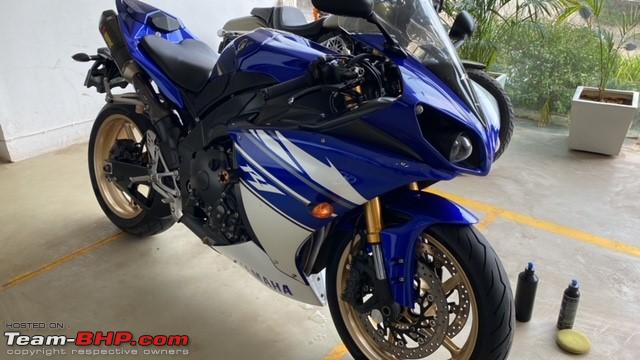 In the meantime, I went to test the CB500X. I stung the bug in the ADV and I really like the CB500X. If only I could afford it. While I was there I met this classy lady. Boy, this thing looks good in the flesh. The build quality is to be seen on this bike. Can’t say it’s worth the price, but it’s a finely built motorcycle. Things for the next shift: I feel like we’ve almost reached where I wanted to take this bike in my mind. All I’m praying for now is a little luck that it will stay like this at least for a while.

Overall, my relationship with cycling is improving. I don’t think I can say I’m comfortable with his performance because I’m not. He’s a scary beast, but I’ve started to like the feeling a little more now.

Check out BHPian’s reviews for more ideas and information.

Ducati and its embarrassment of the wealth of MotoGP riders